by By EILEEN O'GRADY | Arts, In Print 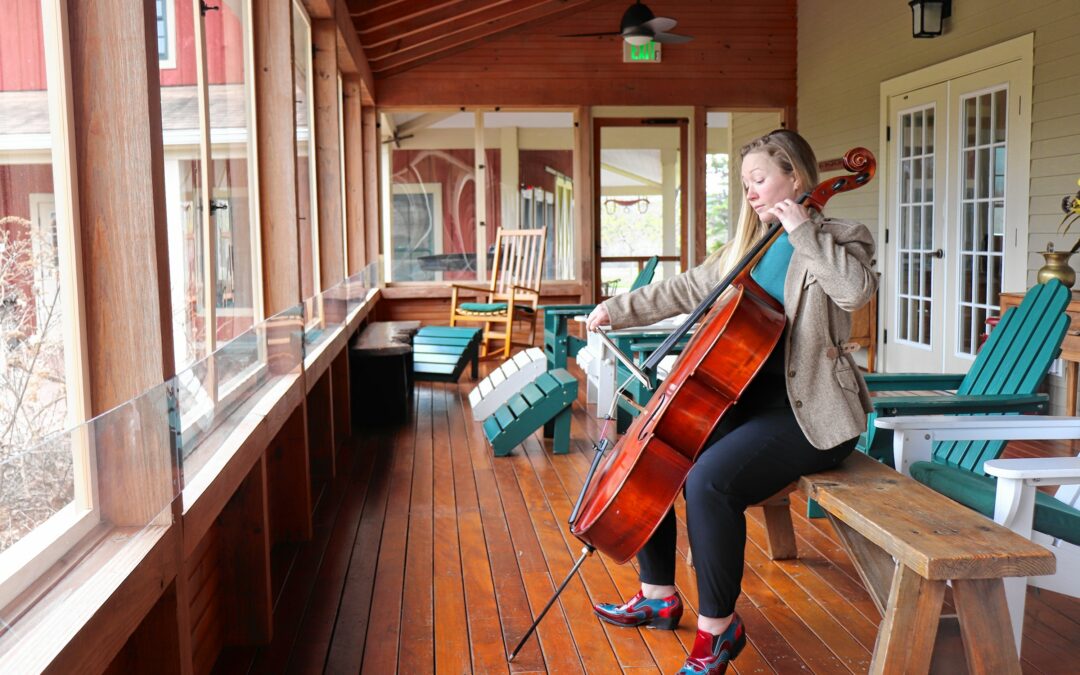 Boscawen retreat celebrates 10th anniversary with season that runs from May 22 to Sept. 17

On a recent morning in late April, the grounds of Avaloch Farm Music Institute were quiet, the only sounds coming from songbirds in the surrounding sunlit meadows and a cleaning team busy preparing the upstairs rooms of the bright red building for the guests who would soon be arriving. But in just a few short weeks, the buildings and the surrounding grounds would be alive with the sound of violins, pianos, cellos, clarinets and many other instruments, notes drifting out of the practice room windows to reach the ears of cows in the pasture next door.

Avaloch Farm Music Institute, a retreat program for musicians in Boscawen, is celebrating its 10th anniversary this year with a season that runs from May 22 to Sept. 17 and will be marked by a celebratory event on the last day featuring food and music. The institute, which some devoted attendees refer to as a “slice of heaven,” gives performing musicians from around the country a quiet and inspirational New England atmosphere to work on music away from the bustle of a big city and the demands of touring life. 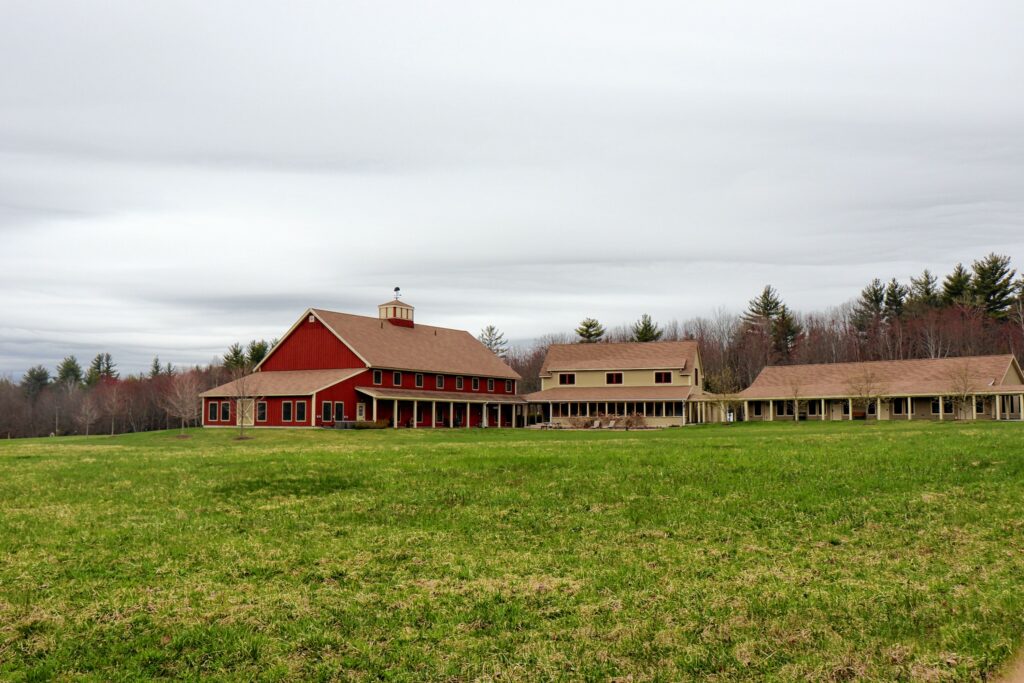 During the summer months, Avaloch Farm Music Institute in Boscawen becomes home to musicians and ensemble groups seeking a retreat to practice their instruments and work on musical projects. This summer marks the institute’s tenth anniversary. Photo by Eileen O’Grady

The retreat center was started in 2013 by Alfred Tauber and Deborah Sherr as a way of bringing music to Boscawen and providing the same retreat opportunities for musicians that are more commonly enjoyed by composers and artists in other disciplines.

Avaloch’s new artistic director, Ashley Bathgate, took over in December 2021. Bathgate, a cellist, started coming to Avaloch herself as an attendee in 2014 to work on creative projects.

Over the years, Bathgate said, the retreat center has gone from serving about 20 musicians playing mainly classical chamber repertoire to over 100 ensembles representing modern classical, jazz, baroque and electronic genres, to name a few, and is the reason many significant projects in the U.S. music world were possible.

“By season two, the word had really spread and so it had kind of exploded into the music communities with people talking about, like, ‘what a fabulous slice of heaven,’” Bathgate said. “It really is. Even as you’re driving up the driveway, I always have this calming feeling. It’s something special about the land, about the people who run it and about the musicians who come here.”

When Bathgate first started attending Avaloch she was living in New York City and found it hard to foster creativity in a small Manhattan apartment.

“Rehearsal spaces and practice spaces in cities are great, but you rent them at a high premium and they’re often a bit sterile of an environment, windowless in many instances, not exactly your ideal creative environment,” Bathgate said. “I found I could never get work done because it was always something. There was noise, or there was a distraction, or I had to get to a gig or I had to get to the airport.”

The institute is free of charge for attendees and gets its funding from the Laszlo N. Tauber Family Foundation. Each musician is given a furnished bedroom complete with linens in one of the main buildings, meals prepared by a chef at the shared dining hall and access to practice studios outfitted with pianos.

Musicians apply – there is a $100 application fee – and pitch a proposed project they plan to work on at the retreat center for days or weeks at a time. Applicants are chosen based on their project’s feasibility, its significance and potential impact on the world, and whether attending Avaloch would enable them to create something they wouldn’t otherwise be able to do. The institute typically receives 200 to 300 applications per year, and usually admits 100 to 125 ensembles, who attend for varying lengths of time throughout the season.

As an attendee at Avaloch, Bathgate has used her time to plan for albums and practice repertoire. One summer she brought three composers to Avaloch to work with her. Each wrote a solo cello piece to go on her 2019 solo album “Ash.” She’s also spent many days just sitting on the screen porch with a cup of tea, writing grant proposals and planning her next project.

“There’s no substitute for having an environment that allows you to have quiet – externally but also internally – so that you can compose, you can think, you can come up with new projects,” Bathgate said.

Michael Compitello, a performing percussionist who teaches at Arizona State University, attended Avaloch for many years and served as an assistant director before Bathgate came on board. Compitello has fond memories of driving to Boscawen from Kansas or upstate New York where he was living, his Honda Fit packed with percussion instruments including snare drums, a marimba and a vibraphone. Many attendees take advantage of Avaloch’s studio spaces to bring a lot of gear – some musicians roll up with station wagons or U-Hauls packed with speakers, synthesizers, amps and recording equipment to use during their stay.

Compitello and his bandmate Hannah Collins from the ensemble New Morse Code started Avaloch’s new music initiative that brings composers and musicians to the institute together to collaborate. Compitello has used his time as an Avaloch attendee to work on new music with New Morse Code and also a solo snare drum project. He says the social time outside the practice room has been equally meaningful.

“When you’re in an ensemble with people and you spend a significant amount of time together, those sort of interstitial moments like the meals, the talking, the developing of relationships outside of performing on your instruments, become essential to the collaborative process,” Compitello said. “It becomes essential to the rapport you have onstage.”

Outside of rehearsal time, musicians hang out on the porch, go for hikes, enjoy the lake and pick blueberries in the nearby blueberry field. Every Friday during the retreat season, the musicians play small concerts for each other in the recreation room to showcase what they’ve been working on, although there is no expectation or pressure to perform.

All the musicians who attend the institute are required to do community outreach, bringing about 60 concerts per season to the surrounding Boscawen area. Avaloch musicians have played their music at local nursing homes, hospitals, churches, and at Old Home Day while Boscawen residents munch barbecue nearby.

Avaloch has allowed many significant projects in the United States music world to blossom. The ensemble Sandbox Percussion worked on their album Seven Pillars with composer Andy Akiho at Avaloch, a project that was nominated for the 2021 Grammy Awards. Renowned ensembles like the Boston-based chamber orchestra A Far Cry and the Aizuri Quartet have done retreats at Avaloch, as has the baroque string ensemble ACRONYM, the Westerlies, Catalyst Quartet, Formosa Quartet, KAIA String Quartet and many more.

The COVID-19 pandemic had a huge impact on the lives of performing musicians whose concerts and tours were canceled, and Avaloch was no exception. The Institute closed for the summer of 2020, and did an online concert series called “Made at Avaloch” featuring performances and Zoom interviews with musicians who had attended the institute. In 2021 they returned with a limited, three-month season and vaccination and testing requirements. Bathgate said the joy that the attendees experienced at getting to reunite and play music with other people after a year of isolation had some attendees sobbing with happiness on the porch.

“I think we all had our moments during the pandemic of maybe questioning ‘why is it that I do what I do?’ and ‘will I be able to keep doing it after this ordeal?’” Bathgate said. “And so imagine coming to a place like this when you haven’t been in a group, you haven’t rehearsed, you haven’t performed for an audience in two years. I can tell you that there is a lot of gratitude going around right now, myself as a performer.”

Bathgate has big goals for expanding the institute to year-round programming, and to offering similar retreats for writers, visual artists or tourists interested in the fall foliage. She would love to add a concert hall and recording studio.

“I think a place like this where you can come and be completely disconnected is magical,” Bathgate said.