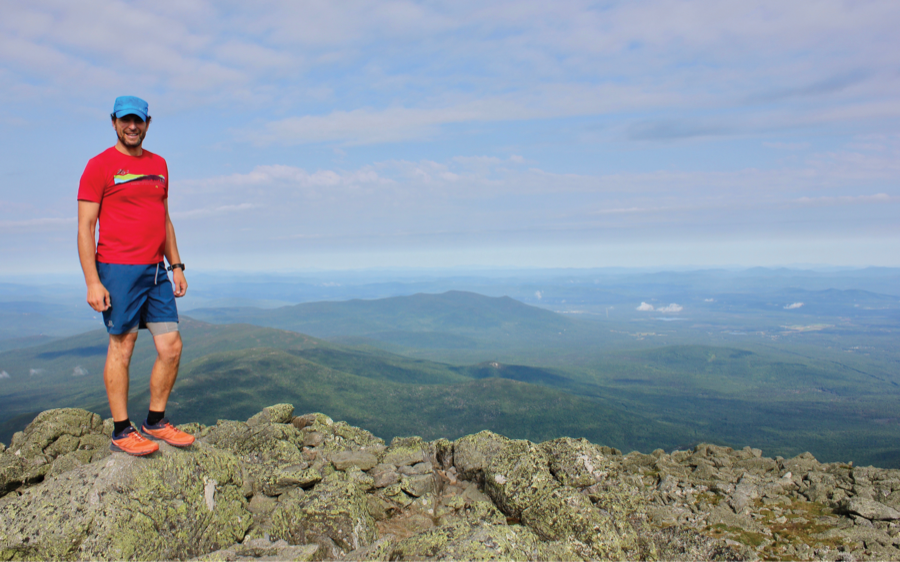 I’m somewhere in the krummholz on the shoulder of Mount Madison in New Hampshire’s White Mountains. It’s 4:45 in the morning, and my world consists of everything in the beam of my headlamp. Shifting rocks of an uneven trail underfoot and two steps ahead, the twisted and jagged branches of balsam fir and black spruce. All else is blackness. At least it was when we started up the Valley Way trail a half hour before.

Surprisingly, when I switch my light off, the world opens, revealing gray morning light, lavender mist over gray and maroon valleys
and hills, ghostly figures of crooked and stooped eight-foot-tall trees. I guess it doesn’t pay to stand tall at 3,500 feet in the Whites. There’s a dark and looming shape above: Mount Madison.

It’s funny how limiting a headlamp beam can be; I’m glad to escape its confinement. It’s a reminder to maintain a broad perspective today. After all, today’s goal isn’t Mount Madison. My running partner Neil Preston and I have come to run the Presidential Traverse. This is a point-to-point trail run that begins with Madison but continues to cover 20 miles, 7 summits, and 8,000 feet of vertical gain.

There’s plenty of potential for things to go wrong, so keeping the big picture in focus is critical. This includes how much water is in our packs, how much food we’re eating, and—the biggie, given the notoriously extreme and rapidly changing nature of conditions surrounding Mount Washington—what the weather’s doing.

Our 4:15am start is designed to get us up our peaks—and off—before any weather develops. So, I don’t pause as morning breaks. Rather, I climb on.

I am not a champion runner, world-class mountaineer, or 5.12 rock climber. I don’t live in the Himalayas or even the Rockies. But I am certainly capable of dreaming up challenges of self-discovery in the many wild and beautiful spaces of my native New England. Challenge can illuminate what sort of mettle, determination, spirit, and grit I’m really made of. That is why Neil and I were trudging up Madison in semidarkness.

“Each trip is a learning experience,” says ultrarunner and running coach Jack Pilla. Jack, who trains runners for a company called The Run Formula, has run the Presidential Traverse an estimated 15 times as part of his own training.

He has experienced heat, cold, missed turns, hypothermia, muscle cramping, running out of food, running out of water, wind, rain, and snow. One time he missed his shuttle at the end and decided to hike back. He says that miserable 19-hour day was monumentally more difficult than the 100-mile race for which he was training.

There are numerous Presidential Traverse routes, but the most common route starts at the Appalachia trailhead. This is in the (tiny) town of Randolph about five miles west of Gorham. It’s a major gateway to the northern Presidential mountains, particularly Adams and Madison and on any Saturday in the summer, there are hundreds of cars parked here.

Nearly 15 miles of our route are above tree line, which contributes to the grandeur (and danger) of the route. Of course, as with all things alpine, there is some controversy and debate as to the specific mountains that make up a full traverse. On the one hand, geography buffs and overachievers argue that a full traverse includes Madison, Adams, Jefferson, Clay, Washington, Monroe, Franklin, Eisenhower, Pierce, Jackson, and Webster. If done in this order, the trail brings one from Dolly Copp trailhead at one end to the Crawford Notch trailhead on the other end.

On the other hand, historians—and the detail-oriented—respond that neither Senator Henry Clay, Benjamin Franklin, geologist Charles Jackson (namesake of Mount Jackson), nor United States Representative Daniel Webster were American presidents. Therefore, a full presidential traverse should not include these mountains.

Though all 11 mountains share a ridgeline, it is possible to bypass Clay and Franklin then drop down into Crawford Notch without summiting Jackson and Webster. Jack—an ultrarunner’s runner—says when running a traverse, he usually scales Madison, Adams, Jefferson, Clay, Washington, Monroe, Franklin, Eisenhower, Pierce, Jackson, and Webster. However, Neil and I opt for a minimalist and purely presidential Presidential Traverse. We could say this is in pursuit of historical accuracy, but mostly we have families to return to . . . hopefully by bedtime.

Mount Washington has a well-documented history of ruthlessly violent conditions. Neil and I decided long before our trip that we wouldn’t even make the drive to Northern New Hampshire if the forecast seemed at all iffy. Rather, we chose two July dates: Plan A and Plan B. A questionable forecast leading up to our A dates would mean scrapping A and setting sights on our Plan B dates. Fortune smiled, however. High pressure settled over Northern New England as our Plan A dates approached.

This is not my first Presidential Traverse. With ultrarunners Dave Baird and Kelly Wilson, I ran it in 11 hours in 2013. We dallied at every summit and we ate lunch in the restaurant at the summit of Mount Washington. Frankly, I felt we could have been significantly faster. The fastest known time, incidentally, is under five hours.

“I want to run my fastest Presidential Traverse,” I tell Neil.

Full disclosure: in 2013, I was in the midst of running 22 marathons and 5 half-Ironman triathlons in the span of 10 years. Simply stated, I was faster and stronger then. My life was organized around training runs, long runs, speedwork, hill work, strength training, bike rides, and swimming.

Things changed. Today my life centers around childcare and school schedules, potty training, playgrounds, and playdates. I run and exercise when possible, but I haven’t run a marathon in three years. When I last prepped for a Presidential Traverse, I trained on 4,000-foot peaks. Neil and I intended to do some mountain running in our lead-up, but it never happened. In 2018, our lead-up included enrolling our kids in the same summer camp and making solid transportation arrangements for the kids in our absence.

Don’t get me wrong. We run regularly and we both have a fitness baseline. But make no mistake, I’m a 47-year-old dad who has rewired his life priorities. So is Neil. And we both still believe we can beat my personal record of 11 hours. Are we as fitness-minded? No. Determined? Yes. Mentally tough? We’re going to find out.

There is another—perhaps more practical—reason why we are focused on a 10-hour Presidential Traverse. The Appalachian Mountain Club operates a shuttle service for hikers, but we would have had to start our traverse at the Appalachia trailhead at 2am to catch it.

The week before our run, I called the Highland Center in Crawford Notch where a seasonal guest-service rep read me some phone numbers off a bulletin board for people offering private shuttles to hikers. I tried a couple of numbers and made shuttle arrangements with a stranger named Kevin.

Let me be clear: this running route is not smooth. We both carry trekking poles. Much of the time I hold them in one hand as I hop from granite step to granite step, but just as often I use them for balance, stability, and leverage.

We carry less than a liter of water up the initial 4-mile, 4,060-foot vertical push to Madison, knowing the Madison hut has water at 4,825 feet—just 541 feet below the summit. When we arrive, the caretakers are preparing breakfast for more than 50 campers. The smell of bacon in our nostrils, we don’t pause on our way to our first summit. We do return to the hut, but instead of tucking in with the hikers for breakfast, we fill our bladders and bottles knowing it’s almost five miles to our next water stop on the summit of Washington.

Next on the route is Adams, a peak that hikers often summit on the same day as Madison. The way continues to be rocky and we pick our way across granite talus and scree.

The stretches before and after Jefferson make up the mental crux of the journey. Adams, Jefferson, and Washington are the biggest peaks of the day, connected by the (sometimes runnable) largest cirque in the Whites.

We carry a change of clothes and very lightweight shells; nothing that would really protect us were we to hit bad weather. We put our faith in the favorable forecast and we made a point before the trip to familiarize ourselves with escape routes to lower elevations.

Our time spent on the summit of Jefferson demonstrates our groove and rhythm:

We don’t spend much longer on Washington. Although the highest and most majestic mountain, we know its summit, with a complex of science buildings, parking lots, train depot, gift shop, restaurant, museums, and (mainly) tourists, is the least climactic. We snap a photo, find the Crawford Path, and begin our long—that is, 8.5-mile-long—descent.

It’s not all down, of course. We still have three peaks to climb (really two, as Pierce is just a few hundred feet off the trail). Some of the day’s best running is between Monroe and Eisenhower, which is a gradual downhill, still above tree line, on smooth(ish) terrain.

By the time we ascend Eisenhower, I’m feeling nostalgic for a traverse that’s almost over. The Presidential Traverse—by no means the only epic route of the Whites (Jack Pilla is partial to the Pemi Loop, a 31-mile, 8-to-12 peak route)—summits the biggest of the big. It combines vertical gain, distance, and logistics with terrain, views, and difficulty.

It’s a social experience, as we encounter teen groups, Appalachian Trail through-hikers, and hut caretakers. “The best job ever!” says one 20-something, laboring under a 50-pound frame filled with garbage from the Lakes of the Clouds hut. But mostly it’s two friends covering a lot of ground—both geographically and conversationally—over a full-day run and hike.

By the time Neil and I hit Pierce, we know we’re going to break 10 hours. We drop out of the blazing sun and into the trees. We are dodging afternoon tennis shoe–clad, cell phone–talking day hikers, and we are mostly consumed in our own thoughts.

What does one think about on the back end of a Presidential Traverse? My mind bounces around a variety of topics: brainstorms for our next adventure, ways to trim even more time, wondering whether our shuttle driver will show. Mostly, however, my thoughts turn homeward as I wonder whether I’ll make it in time to read the next chapter of Charlotte’s Web with my five-year-old at bedtime.

Peaks of a Presidential Traverse

Elevations from the Appalachian Mountain Club.

How to keep the engine from running out of gas.
Layer the following ingredients in a 500 mL mason jar:

Add a dash salt and pepper (if you’re into that sort of thing).

Repeat a second layer and fill to the brim with liquid. Cover and refrigerate.