Old ski areas are lost, but they’re not forgotten

by David Brooks | In Print 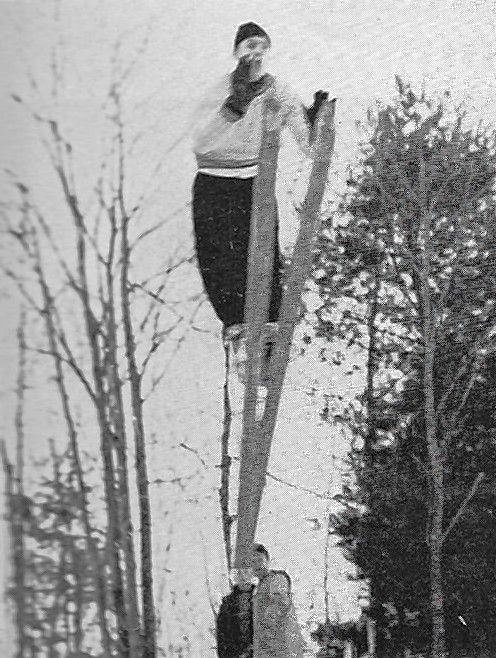 New England Lost Ski Areas Project lists 172 ski areas that used to operate in New Hampshire, most of them tiny one-hill operations featuring tow ropes, which were killed off by costs for insurance and snowmaking.

Here’s a NELSAP list of areas that existed in central New Hampshire:

As snow starts to fall, alpine skiers are happy that there are plenty of places to do downhill runs within an hour or two of Concord. But some might add, with a sigh, that there used to be a lot more.

That wistful group includes one of the state’s congresswomen.

“We’d all arrive in these wooden station wagons with all the kids just piled in there, no seatbelts. … You’d see all your friends, all the same families would be there,” said Rep. Annie McLaneKuster, whose parents were not only prominent state politicians but were skiers and ski coaches, involved in the creation of Wildcat ski area as well as many local ski events. “You only took a few runs then you hung out, almost like tailgating.”

She was talking in an interview last year about Snow Pond in East Concord, a small, private area that offered downhill skiing and even ski jumping for about two decades near Concord Country Club. Although it is overgrown today and forgotten by most people, Snow Pond – like scores of similar long-gone New Hampshire ski areas – lives on in the memories of those who knew it as children.

“You know, it only happened when there was a good snowstorm,” she added of Snow Pond, which never had any snowmaking equipment. “It wasn’t like you could just go whenever. But if we had a snow, everybody would be excited and they’d say, ‘Let’s go to Snow Pond!’ And everybody would pile into the car and we’d all show up.”

“When it snowed, they’d make us all side-step up the hill to pack it down; we couldn’t ski until we’d done that. There would be a line of kids and adults all across the hill, on each slope, going up,” said Dwight Conant, 74. “That, to me, was real skiing.”

Snow Pond, also known as Kibby’s Hill after the landowner Elgin Kibby, was one of at least two downhill areas ski areas open to the public in Concord, along with Russell’s Pond on the south side of Lake View Drive near Penacook Lake.

“As a young kid, probably around 1950, we parked the car out by the pond and hiked up a trail,” said Conant. “I remember a jump with a wooden trestle. My mother won a downhill race out there around that time.”

Russell’s Pond was founded about 1938 for the private Concord Ski Club. It had a 500-foot tow rope and the 30-meter ski jump. It survived World War II, when many areas were lost, but by 1947, the area was no longer listed in a unofficial guidebook for New Hampshire skiing, and probably had shut.

Snow Pond started later, opening in the 1950s, and lasted longer. As well as having a 30-meter ski jump, it had at least two runs and was used by Concord High School’s ski team to train, and it sometimes hosted ski meets and races. Kuster says that by the mid 1960s, Snow Pond had become sort of the graduate school for Concord children learning to ski.

“It was primarily for the older kids,” recalled Kuster. “You had to be able to ride all the way up that rope tow by yourself and ski down.”

She said she first skied at White Park in Concord, with lessons organized in part by her mother.

“As a young girl at Dewey School, we used to wear our wool ski pants and laced ski boots to school. Then we’d walk across the street, and she would teach ski lessons at White Park. A lot of people learned to ski there,” Kuster said, reminiscing about one area known as “three-bump hill.”

After that came ”Foogee,” named in joking reference to Mt. Fuji in Japan.

“It was out on Mountain Road, the backyard of Dr. Horace Blood’s farmhouse. They had a rope tow; it would grab you and you felt that it would pull your arm out of your socket. When you were adept at Mount Fuji, then you got to go to Snow Pond,” she said.

Downhill skiing has existed for centuries, but it only took off after the invention of the mechanized tow rope to haul people back up to the top of the run. Developed in Europe, the mechanized surface lift came to North America in 1933 in Quebec and the U.S. in 1934, when one was installed in Woodstock, Vt. The Dartmouth Outing Club followed suit the next year and soon commercial ski areas were being developed all around New England.

The ease of creating a tow rope system – basically, you took an engine out of a car and put it at the top of the hill, then looped a very long rope around the flywheel and set up some posts to guide it – appealed to anybody with a hill and sense of adventure. Landowners and farmers set them up on sloped fields to make a little winter income, communities created them in parks and woodlands, while inns made them to lure tourists.

Some lasted a couple of years, some ran for decades. It’s impossible to know how many existed, but there were hundreds.

The New England Lost Ski Area Project has been compiling information about these closed areas for two decades at NELSAP.org. As of this week, its website lists 172 closed New Hampshire ski areas, plus one ski jump (Nansen, in Berlin) and eight areas that closed but later reopened, including Tenney Mountain in Plymouth and Crotched Mountain in Francestown.

The closed areas existed all over the place, from Contoocook Ski Tow to the optimistically named Franklin Mountain, from the Warner Ski Tow – which moved when Interstate 89 was built – to Aukee Ski Area in Canterbury.

DEATH, AND SOME REBIRTH

If all these ski areas were so much fun, why did they all die? Two reasons, mostly: Insurance and snowmaking.

The freewheeling early decades of skiing ended in 1974 when the Vermont Supreme Court upheld a $1.5 million injury lawsuit against Stratton Mountain. That sent ski area insurance rates soaring, killing off not just small private areas but a lot of smaller commercial ski areas, too.

Just as important was skier expectations caused by improvements of snowmaking, which costs far too much for small hills to install. As people began to expect downhill skiing to be available all winter, not just when there was good natural snow cover, the limitations of the local hill became harder to bear. A series of poor snow seasons proved the death knell for many local hills, almost all of which had closed by 1980.

In recent years, however, something surprising has happened: Skiers are returning, although in a different form.

Backcountry skiing, in which skiers walk uphill looking for places to ski down through the woods rather than sticking to groomed trails, has taken off in popularity, due in part to improving technology that makes the uphill slog easier. And backcountry aficionados looking for suitable hills have found that long-closed ski areas are a good place to look, and many used the NELSAP website as a place to hunt.

As Appalachian Mountain Club ski writer Tim Jones put it: “The hills that drew skiers in the first place are still very much there, still covered in snow most winters, and many are still ski-able.”

Things have even gotten organized. A few closed ski areas, like Hogback Mountain in Vermont, are being maintained by volunteers for backcountry skiing. The White Mountain National Forest has given permission for volunteers to cut trees and brush on some long-gone ski runs on Bartlett and Baldface mountains. And the Appalachian Mountain Club is mowing one former area, Duke’s Ski Trail a few hundred feet above Cardigan Lodge in Alexandria, for backcountry fans.

Even if nobody’s hauling up old Ford engines to rebuild ski tows, it’s a reminder that the pleasures which drew skiers to all these little hills in the past are still there.

Last winter, Kuster said, she and family members “were out on Blye Farm, went cross-country skiing out across the golf course. We came out at Snow Pond and all my brothers and sisters, we were just recalling all the memories. They remember everything,” she said.

“I think there’s a whole new generation of families who would really enjoy doing it this way,” she added.