The Most Haunted Place In Concord?

by ERNESTO BURDEN | Community, In Print 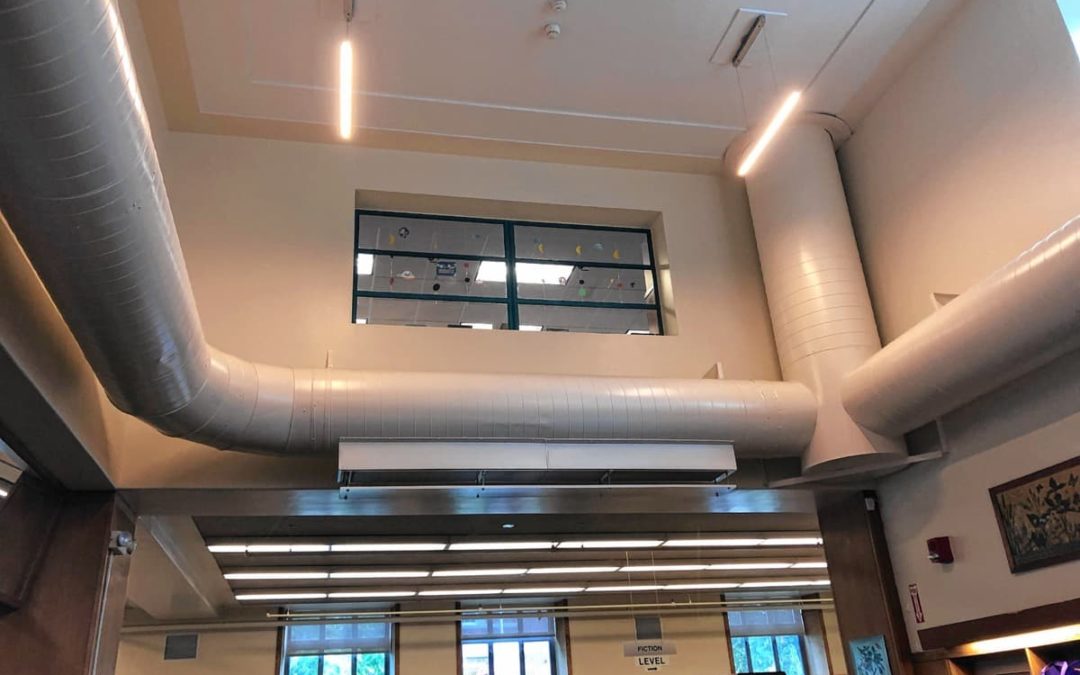 The Concord Public Library may be the most haunted building in the city.

“Personally, I don’t like to be in this building alone late at night after we close,” Concord Public Library Director Todd Fabian told a tour group last year. “I feel like at 7 a.m., if I’m alone, the ghosts are sleeping in. In the evening … well I’ve heard all kinds of strange sounds that I cannot explain.”

The library was one of the stops on Concord’s Upstairs, Downtown Haunted Tour coordinated by Intown Concord Economic Vitality Committee member Jennifer Kretovic.

Kretovic says there’s a running theory among ghost hunters that water is an energy-generating substance that creates spiritual activity. And, she says, there’s “an aquifer under the downtown that’s larger than Penacook Lake.”

And according to Fabian, the library is “the closest location to the largest lake-like portion” of the aquifer.

That’s why, Kretovic says, “Of all the places along the Haunted Tour, the Concord Public Library is likely the most haunted of them all.”

The tales, both old and new, may bear this out:

Staff recall a man refilling the vending machine outside the employee lounge felt hard tugging on his shirt. When he turned, there was no one there. He stopped at the desk on his way out, “as white as a sheet, and told the staff he wanted no part of coming back,” Fabian said.

Speakers lecturing in the auditorium, (right over underground water, Fabian points out) have asked afterward if the building was haunted, and reported feeling breath on the backs of their necks while they were presenting – and sometimes hearing a ghostly voice whisper their names.

Patrons also report seeing a woman lingering in the fiction section on the first floor … then just fading away.

City staff have heard unexplained noises in the boiler room.

They’ve also described books falling off carts and shelves for no apparent reason.

And while Fabian says some people attribute the ghostly encounters to a staff member who passed away in the library in the 1950s, the stories go back much further. And continue to this day.

It’s hard to dismiss accounts from the custodians, he says, who are alone in the building and hear people walking around in other rooms, or see figures watching them from the floor above the atrium, through the window of the children’s reading room.

Of all the places in the library, the basement stacks, off limits to the public, see the most reports of paranormal activity. Half of the library’s collection is in this shadow-drenched basement storage area, and staff must descend to retrieve or shelve books.

A now-retired staff member told Fabian she was walking through the back stacks area carrying a cup of about 40 paper clips. She dropped the cup and the clips spilled onto the floor. She flicked on the light in that aisle and bent down. There were no paper clips. A few days later, in the same area, she saw a paper clip hit the shelf in front of her, as if thrown from behind by an unseen hand.

Oddly, Fabian chuckles, despite the connection between ghosts and water, the one place nobody’s ever reported a sighting is in the library bathrooms.

So if things get strange on your next visit to the stacks, you know where to hide.

Although the library may be at the top of the list, there are plenty of other haunted places in Concord as well. Kretovic and co-tour organizer Sean Skabo shared some of the other prominent ones:

New Hampshire State Hospital: This now abandoned edifice was chartered in 1838 as the New Hampshire Asylum for the Insane. While the state’s Department of Health and Human Services official histories describe the hospital’s buildings and treatments as state of the art (for their time) and “highly therapeutic,” 19th century mental health treatment overall has a dark reputation, highlighted in the expose “10 Days in A Mad-House” by Nellie Bly. Skabo says he’s heard tales of strange happenings in the tunnels under the hospital.

Barley House: Downstairs in the B-Lounge, Skabo says, staff and patrons have reported a little boy appearing in the back left corner when people are having cocktails. They’ll approach him, and he’ll walk backwards – and into the wall.

Old North Cemetery: The cemetery, ringed in an iron fence, was established in 1730 and is the oldest in central New Hampshire. It is also the burial place of President Franklin Pierce and has accumulated plenty of ghostly legends over the centuries. People claim to see spirit lights dancing over the headstones, Kretovic says. And Sharon Bonner, who works at the Concord Public Library, says she was up early for a workout and was driving past the cemetery and saw a woman in a Colonial-era outfit carrying a lantern as she drifted among the graves. u