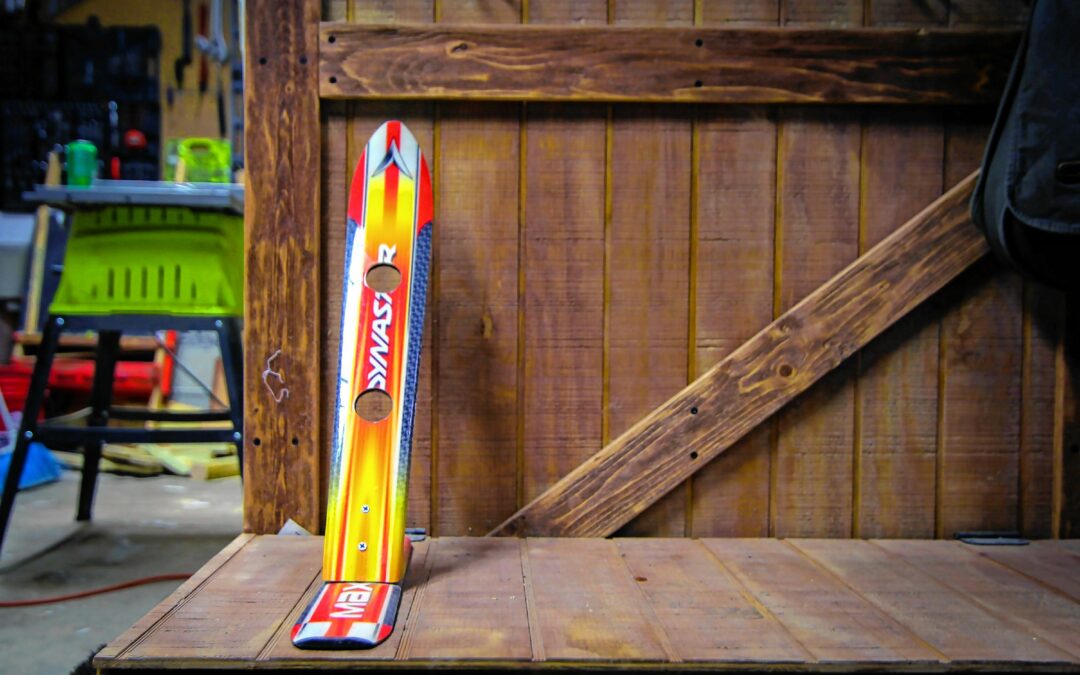 Where one person sees an old pair of trashy skis ready for the dump pile, Jared Mostue sees business potential.

Those old K2s that are too-skiny in today’s world of shaped skis, or those Rossingnols that are too beat up to ever hit the slopes again are Mostue’s building blocks for utilitarian furniture and home decor, like lamps, chairs and even bottle openers.

Mostue has been a skier and ski racer all of his life. He decided to combine his love of skiing with his skills in the workshop, to create Ski Kraft, a business that finds a new purpose for old items, a transformation known as upcycling.

Mostue said it was all “a trial by fire really” when he started tinkering with old winter equipment as the building blocks for new goods. What once started as a hobby has turned into a growing business in the Concord area.

“One of the things that kind of got me into that was in high school I actually started with some woodworking stuff and that was kind of fun and then I saw somebody making Adirondack chairs out of old skis – like that is the coolest thing ever,” Mostue explained. After he got married, his aunt got him and his wife a set of up-cycled ski chairs for their new home. That’s when he first thought maybe he could up-cycle skis too.

His business typically gets the most business around Christmas time when people are looking for gifts. He sells some of the smaller goods online through Etsy, and most of the larger pieces are sold locally.

Mostue originally worked in marketing, but after being let go from his job when the company started to have financial trouble, he began to reassess what he wanted to do with his life. It was then that he decided to become a personal trainer and make his up-cycling ski business a reality. He has always had a passion for fitness and athletics, specifically skiing. He runs his business out the garage of his Concord home.

He makes a wide variety of items from up-cycled skis, including wine racks, chairs, coffee tables and coat racks that use old binding as clips – basically anything he thinks can be made or improved upon by using skis. This past year, he started making table lamps out of cross country skis.

He said most of his customers also have a passion for skiing and some give him their old skis to make into something new. He also has some people who want things made with older, more vintage skis, while others want newer up-cycled skis. The bottle openers he makes, which come with a wooden box at the bottom to catch the detached cap, have been his biggest seller.

“I blame my grandfather, really, for everything,” Mostue explained. “He grew up skiing out in Minnesota and, of course, then got my dad into it when he was young. My father was on ski patrol for years and years. And so it’s just been a family thing we always have done. Obviously we got introduced very early and I just loved the speed of it, the adrenaline of it.”

Mostue and his father share a birthday, so when he was growing up they would go up to Loon or one of the other mountains up north and make a weekend of it. Mostue said those are “some of the best memories I have going out.”

His family always went on ski trips, sometimes out west too. When he was too young to ski on a real mountain, his parents put him in plastic skis and pushed him around their backyard. Mostue said he grew up skiing at Pats Peak and his racing career started at Santa Fe Ski Team, when he went through the program there.

For college, Mostue went to Alfred University in New York, where he skied during all four years and made it to Nationals three out of the four years.

“I had a great time,” Mostue said. “I was able to have some amazing experiences skiing different mountains out west for the Nationals, so it was lots and lots of fun.” In competitions, his best discipline was giant slalom, although he said he loved slalom as well.

Mostue hasn’t quite hung his ski racing boots up yet either. He still does club racing as much as he can. “I love racing. It’s fun. I always have done it, and until I can’t ski anymore, I’ll continue to do it.”

He said as soon as both of his sons could walk he started teaching them to ski. His oldest son is 6 now and his youngest is 5.

Many of the skis he uses for his up-cycles are usually given to him. But he also collects them from the discard pile from shops at local ski resorts. When the ski season is over and done with, it means that any trade ins or lost and found skis are thrown in the trash. He makes the rounds and collects anything that’s leftover.

He said sometimes people will give their old skis to ski shops, but they aren’t always able to be used or resold. Some of the older skis are from the late ’70s, ’80s and even early ’90s, which means they’re not always in great shape. Mostue also goes to the dump to find skis and if they are in halfway decent shape he’ll bring them home to be reborn into something new.

Growing up, sustainability and recycling were really engrained into him. Preventing more skis from ending up in landfills and up-cycling is very important to him, he said.

“I think it’s important thing to do to keep things out of dumps, out of landfills,” he said. “And really, they’re not good. Not biodegradable. They’re made of plastic, wood, metal. Eventually they’ll break down like some of the wood cores, but there’s plastic and it’s all built around that so that’s never going to get there. So I feel like I’m kind of helping in some very, very small way keeping a lot of non-biodegradable material out of landfills. As much as I can, anyways.”

Often he’ll go and find skis just like the ones he and his family used to use and it brings back memories.

He said it’s all about not throwing something away that is deemed useless by others.

“I have skis that are 10 years old. I don’t ski them,” he said. “I’m actually going to be turning them into a chair. They’re beat up, they’re beyond their useful life. And so why not do something kind of fun with it and repurpose and give that little bit of nostalgia to some people.”

For this past Christmas, Mostue said he built a set of chairs for a man who found him on Facebook, where he posts videos and photos of his creations. The man’s father in law had knee surgery and was going to have to sit out the entire ski season, and he hadn’t missed a winter skiing in 60-plus years. He was depressed about it and they decided they wanted to do something really special for him this year. Mostue came up with a chair design that wasn’t super low slung like traditional Adirondack chairs so it would be easier for the man to sit down and get up despite his injury. The chair turned out great, but Mostue used up a lot of his ski supply. Mostue tends use older, straight skis because they’re classic and a lot easier to work with.

“A lot of times some of the newer ones, the shapes just don’t really lend themselves to building things,” he said.

The creations aren’t 100% skis either. He uses different types of wood for contrast and support. But rather than attach a gleaming piece of fresh cut wood on an old ski, he spends time making the whole piece look more vintage by distressing the grain.

“One of the things I do with wood, it’s kind of my signature style,” he said. “I have a propane torch and I torch all the wood, so it really darkens the grains.”

The most important value that Mostue tries to instill into his sons is the passion he has for being outdoors.

“If my kids love skiing and they want to ski race. Awesome. Fantastic. That’s been my life. They want to follow in my footsteps, great,” he said. “I just want them to find something they love to do and just have a passion for that thing and just continue it. And then have fun. That’s a big thing for me. If I’m going to do something I’m going to do something that’s gonna be fun. Why I ended up leaving corporate life and office work was that I wasn’t having fun anymore.”