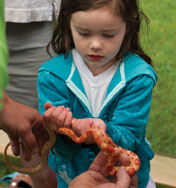 Providing an evolution in education

Story and photos by Vicki Beaver

“Don’t touch its back. It breathes through its back,” echoes through the young crowd under the tent canopy as the small group of kids watches a White’s tree frog from Australia pass from one open hand to another.

Shawn O’Neill of Rainforest Encounters orchestrates the smooth interaction between children and amphibian as he introduces his collection of critters at Kids Fest in Newport, New Hampshire. His ability to calm the uneasy and steady the exuberant is balanced with his care and precaution for everyone involved. His passion for reptiles, amphibians, and other animals is contagious, and it’s reflected in the faces around him.

Based in Newport, Rainforest Encounters offers educational, hands-on animal programs at schools, birthday parties, and other events and gatherings. Their goal is to introduce children as well as adults to misunderstood or maligned animals that live locally and around the world and to educate their audiences about them.

Rainforest Encounters has reptiles, amphibians, and invertebrates, including tarantulas, Madagascar hissing cockroaches, scorpions, geckos, bearded dragons, tortoises, lizards, an albino corn snake, pythons, and a nine-foot red-tail boa constrictor. Each program is an interactive presentation. The animals are introduced one at a time, and everyone gets a chance to hold them, ask questions, and hear stories and interesting facts about them.

While parents bring their children for this special experience, O’Neill finds he’s usually surrounded by just as many adults. “They get right in there and get just as excited,” he says.

A Man and a Mission

O’Neill started Rainforest Encounters because of his interest in reptiles and other animals, but a more compelling passion was the catalyst for its creation: to expose children to some of the animals they would otherwise grow up fearing and misunderstanding. “Without exposure, kids have an inherent fear and think that these things are evil and they’re going to hurt them,” says O’Neill. “I try to show kids that they’re harmless, and hopefully they’ll respect them. When you don’t have exposure to these animals, you may always have a fear of them.” He reassures his audience that they are not here to harm people.

Part of every presentation is devoted to explaining how each of these under-appreciated critters plays a beneficial role in the habitat where it lives and in the ecosystem. “Everything plays a part in the global ecosystem, even the little hissing cockroach. Without them, this world would be uninhabitable,” says O’Neill. “They actually benefit us. Cockroaches and lots of other insects help break down decaying matter under trees in the rainforest, which stores most of the carbon dioxide produced. If they didn’t break down all that waste, eventually tree roots would be smothered and the trees would die. That would severely affect the human race. It’s not just the animals you’re looking out for. If something happens to them, it’s going to affect us all.”

Pet-store staff can offer a wealth of knowledge, says O’Neill, but while they know a lot about dogs, cats, birds, and some reptiles, they may not have the in-depth knowledge that a new snake or frog owner might require in order to keep his pet healthy and happy. O’Neill offers consultations for people who need advice after they have purchased an unusual pet. Many times, these pet purchases are the results of “impulse buys,” and people may end up with an animal they don’t really know how to keep healthy; it can be difficult to know how to tell whether the animal is doing well or not.

The absolute last thing O’Neill advises doing is releasing any pet into the wild. Entire ecosystems can be devastated by the release of non-native species that become unwanted pets. Instead, contact him and tell him what you have. If he can take the animal, he’ll even come to your house and pick it up. He will rescue most reptiles, amphibians, and invertebrates, with the exception of venomous animals.

When owners of unusual pets go on vacation, they may have trouble finding pet-sitting services for their critters. O’Neill can help there, too; he offers snake sitting and more at his place or yours.

Worthy of Respect and Admiration

We owe many modern medical advances to nature and animals. The White’s tree frog, for example, is saving people’s lives. All frogs have a secretion as a defense mechanism, and scientists have found a way to reproduce the secretion of the White’s tree frog for use in blood pressure medication.

Most amphibians breathe and drink water through their skins. At Rainforest Encounters, people wash their hands and rinse them well before and after handling the animals. Any residue of soap or chemicals left on hands can be absorbed by amphibians’ skin. These may then enter an animal’s blood stream and be fatal to the animal.

The best thing you can do if you find a wild animal is to leave it alone. Take pictures and enjoy watching it, but don’t try to touch or catch it. Snake populations in New England and amphibian populations almost everywhere have declined rapidly over the past couple of decades.

At the Kids Fest, O’Neill holds out one of the pythons to the slightly cringing crowd and explains that the snake’s skin is not slimy—a common belief. With a little encouragement, even the most tentative hand reaches out and lightly touches the beautiful, scaly skin. “It’s soft!” someone exclaims.