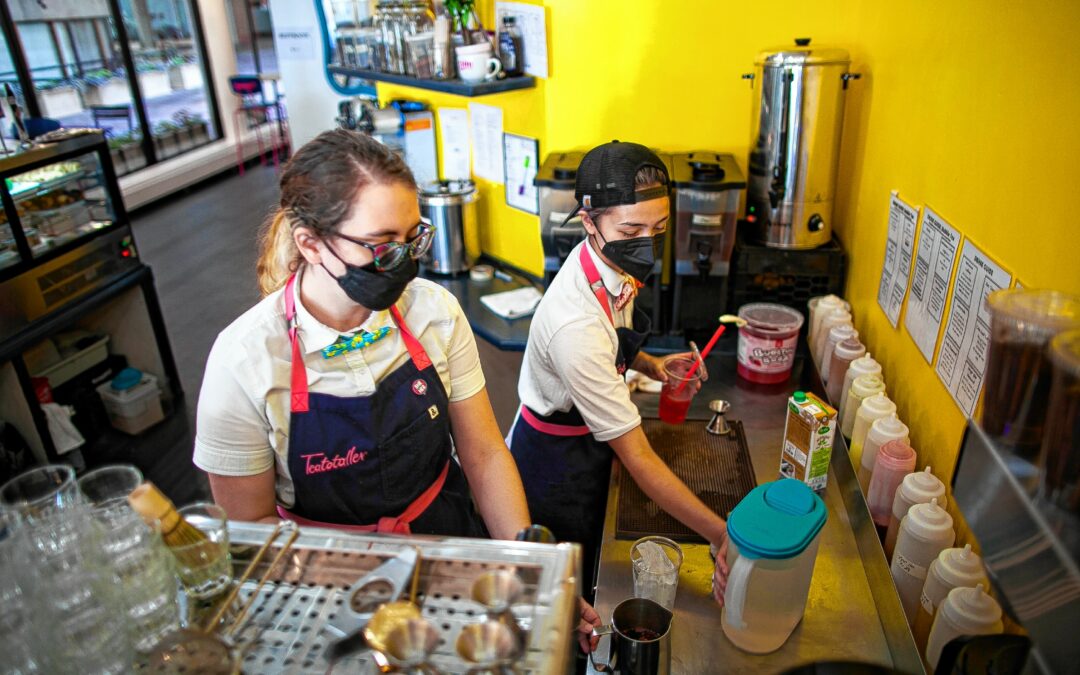 With its bright pink facade and its commitment to equity and inclusion, Teatotaller Cafe is standing strong in downtown Concord 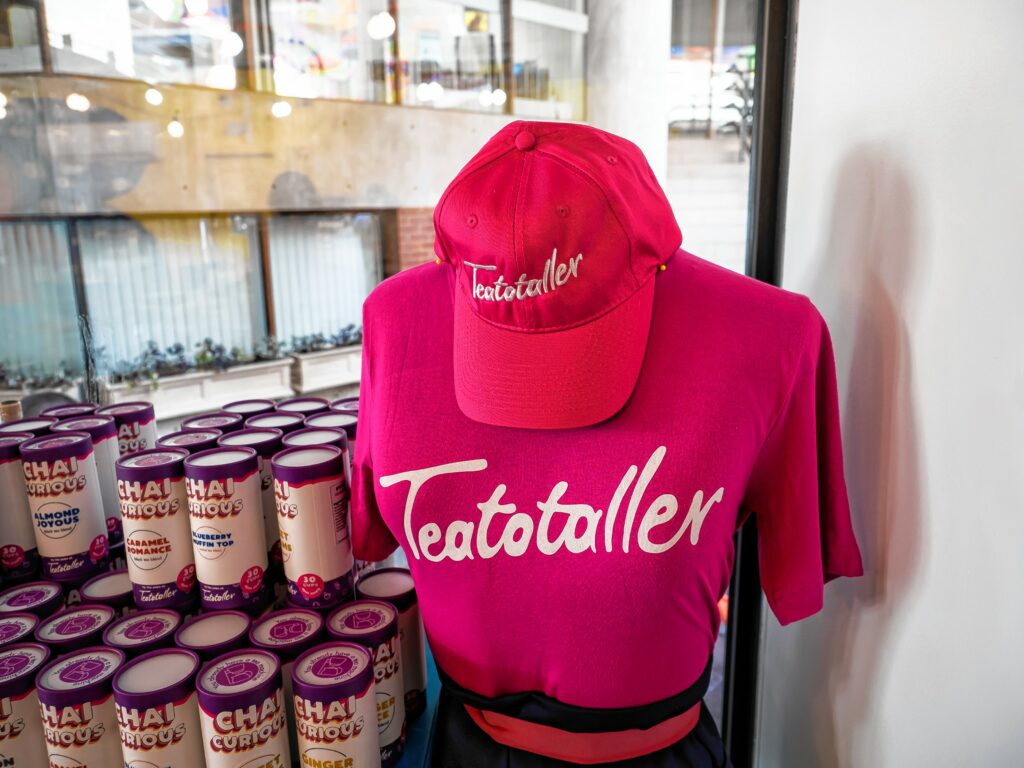 Teatotaller, a new cafe that describes itself as “an oasis of queer, hipster, tea, coffee, and pastry goodness,” in downtown Concord.

In downtown Concord, the beautiful red brick buildings and granite-lined streets tell the history of a centuries-old New Hampshire city.

However, just two blocks from the 200-year-old State House stands a bright pink facade, that is meant to be visually different from the rest.

Behind the bold exterior of the Teatotaller Cafe is a collective of committed artists and activists working toward a common goal – inclusivity and acceptance.

The “R U Curious?” sign plastered on the glass front door in a pink hue, almost as bright as the building, hopes that those passing by will answer its enticing question, and step inside.

Upon walking through the entrance, one is faced with pops of colors that are begging to be noticed. These colorful accents don’t stop at the structural components of the cafe, as customers can choose from a drink like the lavender lemonade or the avo stack toast as colorful as the architectural design.

This commitment to taste and style is shown not only in the food, but in the art design as well. Muralist Rachel Sotak created some of the whimsical artwork inside the cafe. She said that the thought of community was present in the pink, flowing design that amplifies the atmosphere of the cafe.

The mural is made up of a combination of elegant, pink brush strokes painted across a white background, a perfect place to take an Instagrammable picture upon visiting the eatery.

“One of the things we talked a lot about was wanting to make sure that it was something that was appealing to all audiences,” said Sotak. “What’s so amazing about art is that it has the ability to be interpreted so I think when we decided to do something that was abstract we wanted to have the same sort of intention with it.”

Her answer was found in the philosophy that founder Emmett Soldati created in the Teatotaller Cafe. Rather than creating an art piece intended to make a person do a certain thing or feel a certain way, Sotak and owner Emmett Soldati focused on creating a piece that could be understood in a variety of different ways. “I think having the very fluid shapes and his brand colors spoke to that message very well,” Sotak said.

Pride month may be over, but Soldati has found a way to help keep the celebration of queer culture alive at the Teatotaller Cafe.

Entering their 11th year as a business in Somersworth, Teatotaller has already made a huge impact on the New Hampshire community, and since its opening in Concord this June, Soldati has been overwhelmed with support from its new community as well.

“We just opened in Concord and I have been blindsided by the support, interest and curiosity,” he said.

Soldati considers the restaurant to be a place for everyone, something that the world could use a little more of right now. “We are a third place, not your home and not your work. We are a place that is clearly welcoming and inclusive and celebrating of difference and queerness, which is severely lacking.”

The Teatotaller Cafe is not only a safe space for members of the LGBTQ+ community but is a dry establishment as well. “Fashion between being both a dry and a recovery space means we are also a space for youth to gather and commune and hang out,” Soldati says.

The nature of the non-alcoholic restaurant is to inspire those that might not partake in drinking to socialize in the same way that one might do at a local bar.

“Identities, queer identities, tend to be tied up into adult-only identities,” Soldati said, “Which is not the nature of what it means to grow up and think about one’s self and place in the world.” He wanted the restaurant to be all-inclusive and incorporating a no-alcohol policy allows for all people of all ages to experience the vibrant, energetic culture of Teatotaller.

“My favorite thing is the people, the staff, the customers, the drag queens,” said Soldati. “It’s everyone that wakes up every day.”

Soldati’s love for those involved in the eatery both internally and externally is one of the many reasons Teatotaller has been so successful. “He [Soldati] kind of took a chance on me actually, which I’m really grateful for,” said Sotak. She had reached out to Soldati inquiring about a potential collaboration, knowing early on that the Concord restaurant would be a smashing success.

The connections that have been formed over avocado toast and Soldati’s signature “breakfast sammy” is a true testament to the cafe’s success, speaking volumes of the kind of location that was lacking in Concord. “The things that we’ve done have had the reverse effect and pulled people out of the woodwork in small sleepy towns,” said Soldati. “Until you have spaces that activate people you really never know how they think or how they feel.”

If the joyful exuberance of the cafe isn’t enough incentive to visit the restaurant, one only needs to turn to the menu. “I’m proud of our menu. I’ve liked that our menu, although from scratch and from the brain of Emmett Soldati, has delighted people.” Soldati continues to describe the bakery as “almost as queer as the programming.”

Teatotaller has proven that New Hampshire is anything but a cultural food desert despite its quiet nature, as this “queer oasis” allows people to feel as if they’ve been transported to a whole new city or country.

The eatery’s presence in Concord is quenching a thirst that people have had for something new and different, making an impact on anyone who chooses to visit. “Having Teatotaller has made me fall in love with New Hampshire all over again,” Soldati said. “Teatotaller has revealed to me how much of a community of support I have here from anonymous strangers, neighbors, and others who think like me and feel like me.”

Soldati said that the overwhelming support from the Concord community signals to him that there is a real need for such spaces in the town. “We are not just a cute, small and funky shop but we are actually fulfilling a need in communities,” Soldati says. “We hope to grow and provide a workplace that is inclusive and a safe space and to really connect communities that are thirsting for an oasis while continuing to build consistent treats at our Somersworth and Concord shops.”