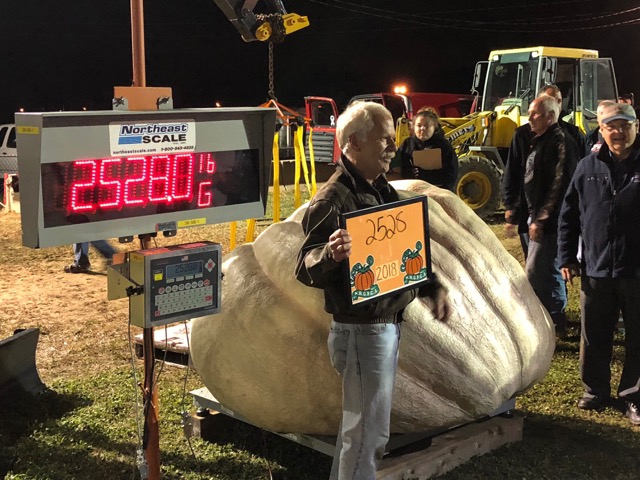 In a Boscawen backyard that evokes images of Jack and the Beanstalk, farmer Steve Geddes is again growing a beast of a gourd that could top 2,500 pounds 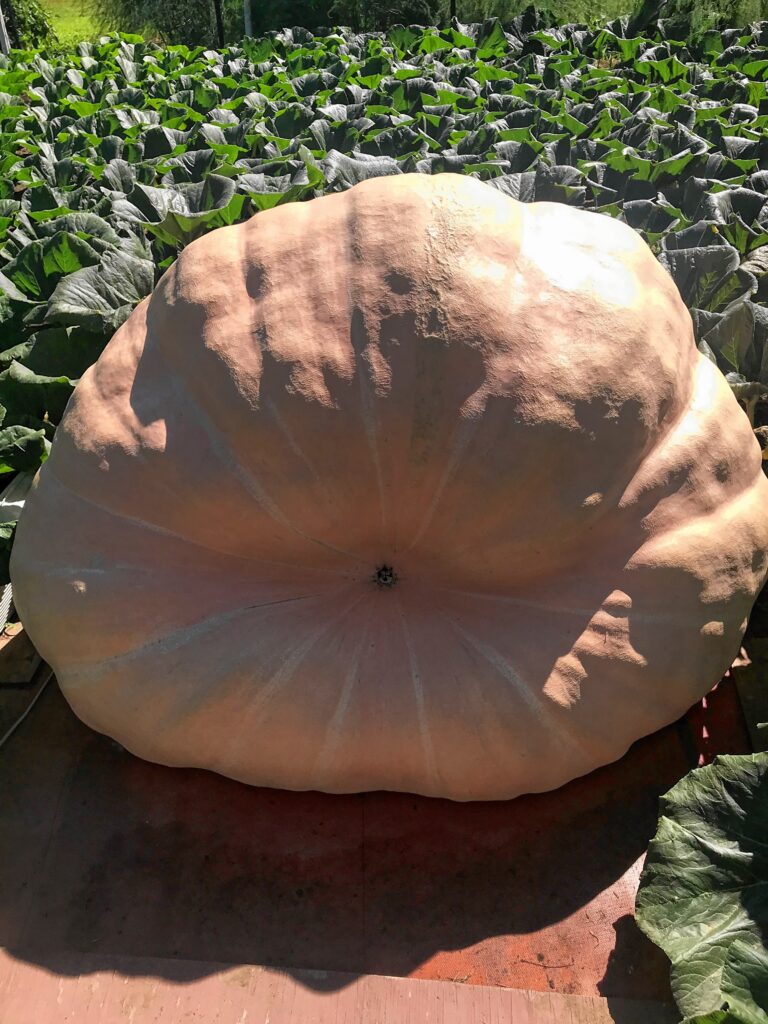 Steve Geddes giant pumpkin – leaves and all – will eventually cover 2,000 square feet, and the gourd itself can grow 60 pounds in one night.
Courtesy

And you think kids grow up fast?

Check out Steve Geddes’ baby, in his vast garden behind his house in Boscawen. There, you’ll see a big bump, shaped like a little Volkswagen Beetle, covered by white sheets and surrounded by giant green leaves that spread like the Poppy Field in the land of Oz.

A pumpkin sat under those sheets, needed to keep it cool against the humid nights. Geddes, a national record holder, pulled the sheets off like a car enthusiast unveiling a vintage Corvette.
The day was hot, but the pumpkin, somewhat round and bumpy, was cool to the touch. It had gained 40 pounds overnight. In late July, it gained 60 in one night. Its vines can grow 12 inches in one night.

This pumpkin, Geddes said, weighed between 1,500 and 1,600 pounds during the summer. The official number will be documented at the Deerfield Fair later this month.
He’s yet to top the 2,528-pound whopper he grew four years ago. In fact, no one in North America has produced a pumpkin that heavy. 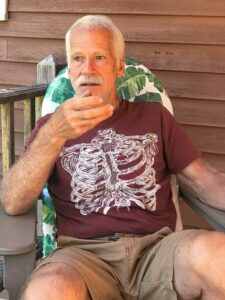 “What I like about this is it’s just a question of how big can they get?” said Geddes, who lives in Boscawen. “And can you improve it? It’s like any other thing that is competitive. I’m curious, can I do better than I did last year? I’ve always competed against myself.”

He began growing pumpkins – more of a hobby for Geddes, an obsession for others – 15 years ago, when a friend, cognizant of Geddes’ green thumb, finally convinced him to try it.

The friend gave Geddes a two-gallon pot with the pumpkin seed already buried in the soil. That’s the traditional start of the process. Grow the pumpkin for two weeks inside, his friend told Geddes.

Then, transplant the pot into the soil and watch it explode.

Geddes, who initially thought the idea was silly, quickly discovered that pumpkins, like children, get big, fast. He also discovered he was good at growing them.
He’s 65 and slender, a competitive cyclist and runner who once routinely ran 10k races and marathons, but who had trouble in recent years finding the time to enjoy those lifelong activities, pushed aside by the attention needed to nurture these monstrosities.

Last year, with Covid changing the world, Geddes took a year off and discovered that he was happier and more relaxed than he had been in previous years.

Searching for balance in his life, he’s growing just one this year so can enjoy exercising outdoors. He transplanted the two-gallon pot, with its soil and seed, on April 5.

The Atlantic Giant Plant serves as the foundation and lifeline for the pumpkin. Giant green leaves, too many to count, cover 1,200 square feet and will grow to 2,000 by the end of the summer.

The leaves grow side vines that all attach to one, thicker main vine and send nutrients to the pumpkin. That means all those huge green leaves are connected in a network and seen as one plant.

“He’s good at it, but he puts in the time and effort, that’s for sure,” said Geddes’ wife, Laurel Buccini. “I do the flowers and he does the vegetables.”

His backyard is a garden of Eden, a place blooming with flowers. Birds fly in and out, feasting on offerings from a birdhouse and a birdfeeder. Vegetables are growing everywhere: Tomatoes, asparagus, peppers, basil, cucumbers, butternut squash, zucchini, blueberries, apples.

The pumpkin, of course, dominates the landscape in the couple’s backyard. It stands alone in size and weight, displaying a vegetable that needs to be lifted mechanically by straps and lowered onto a special scale to record its weight.

As Geddes put it, his pumpkins resemble something out of sci-fi movie, “or from a fable like Jack and the Beanstalk. Other (vegetables) just don’t grow like that.”

Meanwhile, Geddes and his vibrant vegetable are, like growers around the world, governed by the Giant Pumpkin Commonwealth. A representative from the GPC sometimes attends an event – like in Deerfield – if the organization believes that a record might fall. Otherwise, two individuals are chosen and serve as witnesses.

The Giant Pumpkin Statistics and Grower Resource is easy to find online and lists the top 10 official pumpkin weights. Geddes is fifth, but he’s No. 1 in North America.

The four growers above him are European, and Geddes recites their names and records like a baseball fan announcing the Red Sox’s lineup.

Geddes is part of this elite group. He goes above and beyond what some growers do. He gets on his knees early each morning to spray the plant’s giant green leaves and soil below, saying it’s better for the roots than merely spraying from above.

He covers the pumpkin with those sheets, which growers don’t always do, and there are even fewer who use five sheets like Geddes does. He uses a tarp like a fence, raising it each night so mice and deer don’t snack and form a hole that could lead to rotting and a waste of weeks or even months of work.

And, unlike some others who grow their pumpkins indoors to create the perfect environment – increased CO2 levels and a perfect climate – Geddes does it all outside, daring the elements to affect his baby as it sprouts fast like a weed.

Members of the state’s Giant Pumpkin Growers Association host meetings every two weeks, at a different member’s home each time. Geddes hosted the last one.

He set up picnic tables in his backyard, about 50 yards from the big bump covered by white sheets. Members ate, drank and discussed the subtleties of proper and successful pumpkin growing, like mixtures of water and nutrients.

Geddes goes all out. He uses a heating cable to keep the pumpkin warm and a double-sided fan to cool and dry any rotting-causing rodent bites.

It’s a five-month window from birth to full size. Before you know it, Geddes’ pumpkin will be fully grown. The scale is waiting.