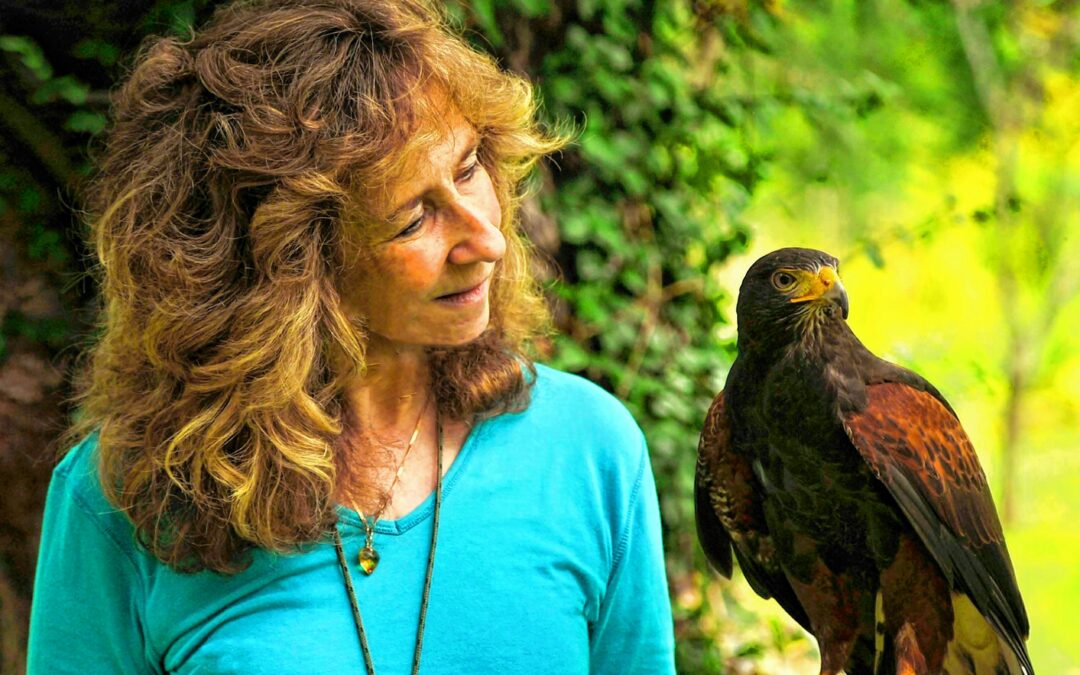 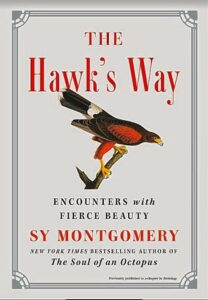 From Sy Montgomery, the New York Times bestselling author of “The Soul of an Octopus” comes “The Hawk’s Way: Encounters with Fierce Beauty.” When the Hancock author went to spend a day at falconer Nancy Cowan’s Deering farm, home to a dozen magnificent birds of prey, it was the start of a deep love affair. Nancy allowed her to work with Jazz, a feisty, four-year-old, female Harris’s hawk with a wingspan of more than four feet. From the moment Jazz swept down from a tree and landed on Sy’s leather gloved fist, Sy fell under the hawk’s magnetic spell.

Over the next few years, Sy spent more time with these magnificent creatures, getting to know their extraordinary abilities and instincts. They are deeply emotional animals, quick to show anger and frustration, and can hold a grudge for years. But they are also loyal and intensely aware of their surroundings. In this account, Sy reveals the wondrous world of hawks and what they can teach us about nature, life and love. The following is an excerpt from “The Hawk’s Way.”

My introduction to falconry is a bloody one.

On a cool, gray mid-October day, master falconer Nancy Cowan, a petite, blue-eyed blonde in her late fifties, hands me the most beautiful bird in the world: a four-year-old female Harris’s hawk (named after ornithologist Edward Harris) named Jazz. A deep, coppery brown, with reddish shoulders and a white tail tip, Jazz stands more than twenty inches tall, weighs thirty ounces, and her outstretched wings span nearly four feet. Her profile is regal and knowing. Harris’s hawks are big, but their appetites are bigger. In their native cactus deserts in the Southwest, they hunt moorhens as big as ducks and jackrabbits that can weigh more than twice as much as they do.

Nancy has offered me a choice: of the dozen or so birds of prey she and her falconer husband keep on their rural New Hampshire property, I could work with Jazz or Emma, the lanner falcon. Emma is also beautiful. With a slate back and wings, creamy belly, and chest- nut crown, her kind is the species pictured in Egyptian hieroglyphics. But Emma is smaller than Jazz by a third. And, Nancy explains, Emma has been raised by humans. At the mature age of sixteen or seventeen years old, Emma is exceptionally docile and calm.

Jazz is not. Nancy had warned me: Jazz is “feisty,” sometimes uncooperative, and “doesn’t like hats.” (How Jazz expresses displeasure is left unspoken — but looking at her curved obsidian talons and sharp black beak, I am glad that despite the cold I have come bareheaded.)

But I am not afraid. It’s her wildness I want from the moment I set eyes on her.

Stepping from Nancy’s falconry glove to the one loaned to me, Jazz’s huge yellow feet grip my left hand with shocking strength. It is wise to be sheathed in leather. Otherwise, simply by perching, her talons would rip the skin of my hand and wrist and could easily pierce me to the bone. I am impressed by Jazz’s feet, but am awestruck by her huge mahogany eyes. They look past my face, past my soul, as impassive and hungry as fire. Her eyes seem to be devouring the world.

I know I don’t matter to her at all. Yet to me, she is everything. Why do I love her so immediately? I love that she is big; I love that she is fierce; and I love, too, that she might be unpredictable. She is the essence of hawk, a bird so unlike anyone I have ever known. And here she is on my arm.

I pretend that claiming Jazz isn’t greedy. That leaves the smaller, calmer bird, Emma, for my friend Selinda. It didn’t take much to persuade Selinda to accompany me; she loves animals as well as a good adventure (her first job out of college was working as a geologist in Alaska). But attending the half-day introductory course at Nancy’s New Hampshire School of Falconry was my idea, and I reckon if one of us might get hurt today, it should be me. Our instructor chooses to work with Banshee, a teenage peregrine falcon. The bird of prey recently reintroduced to cities to help control pigeon and starling populations, peregrines dive through the sky after their prey at a heart-stopping two hundred miles an hour. Her head is capped in black, her back and wings a deep, shiny blue, like the skin on a blue shark. Five inches shorter than my big Jazz, she seems tiny, precise, a knight-errant clad not in chain mail but feathers.

We start walking down Nancy’s gravel driveway, amazed that these majestic predatory birds sit sedately on our fists.

Then Banshee bites Nancy in the face.

The attack comes without warning. It’s a hell of a bite. Later Nancy explains to us that being bitten by a peregrine feels like being punctured by a staple gun. A notch in the bird’s curved bill, an adaptation for crunching the vertebrae of its prey, makes the bite particularly messy and painful.

Blood gushes from the wound. What will Jazz and Emma do? I worry they might attack at the sight of blood, as my chickens do, but they ignore it.

Selinda and I, however, gasp in distress. “Don’t worry about it,” says Nancy. “Banshee’s a teenager. She’s just being a brat.” Though I periodically dab at the wound with a tissue, the blood flows down our instructor’s cheek and drips off her chin for half an hour.

Nancy is used to this. And so apparently are the neighbors. Drivers slow their cars and wave genially. Only Selinda and I seem to think anything of the sight of three women walking down a country road with birds of prey perched inches from their faces, one of them dripping blood onto the road. Nancy and her falconer husband, Jim, have lived here for twelve years.

Everyone knows about their birds.

Only one vehicle stops. The driver greets Nancy (without a word about her wound) with the news “I’ve got something for you.” He reaches into the back seat and pulls out a dead woodcock — a medium-size, sandpiper-like bird of New England’s fields and meadows — and hands her the corpse through the window. Food for the hawks, I assume. But later, I learn this would be her dinner. Clearly, I have entered a strange new world. Selinda and I — vegetarians who mourn roadkills and weep over books in which animals are hurt — are taking this course because of our love of birds. We never thought that, less than thirty minutes into the course, we’d be facing violence, blood, and death. But what shocks me more is this: though I’m sorry that Nancy has been bitten and I’m distressed that the woodcock has been killed, somehow, in the presence of these birds, blood and death are not repulsive. I feel myself being drawn to a mind wholly unlike my own.

This excerpt is from “The Hawk’s Way” by Sy Montgomery. An earlier version of this material appeared as a chapter in Sy Montgomery’s book Birdology (2010). “Birds are Fierce” from Birdology, 2010 by Sy Montgomery. Reprinted by permission of Atria Books, a Division of Simon & Schuster, Inc.