Miriam Carter: A Maker and Wearer of Hats 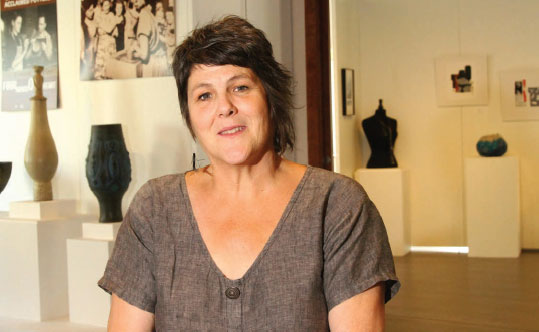 It’s a well-known adage that to juggle the myriad demands of running a thriving organization requires wearing many hats. In the case of Miriam Carter, the new executive director—since January—of the League of New Hampshire Craftsmen, this idiom is both ﬁgurative and literal. The Dublin resident is a fourth-generation felt maker whose luxe line of clothing and accessories includes hats.

“To be successful as a craftsman for decades, you must wear many hats in the sense that every aspect of creating, promoting, and selling your work and growing your business is paramount. This sensibility transfers well into my new position,” Miriam says.  “The fact that I also make hats is ironic,” she adds with a laugh.
This holistic vision of what it means to be a craftsperson may be the reason that Miriam, ironically enough, is the second craftsperson to hold the executive director position in the League’s 85-year history. Over her 30-year career as a single, full-time ﬁber-arts artisan, Miriam has developed an innovative felting process that brings national attention to her contemporary work. Further, her crafting genes have deep roots. “My great uncle, Alfred Dolge, made piano felt in the late 1800s. My father is a weaver who also worked as a manager in a textile woolen mill, and my mother is a couture seamstress.
“Living the life of an artisan is truly an act of faith so when I took the executive director position, I asked the board of directors to take a leap of faith with me, to invest their expertise in all aspects of the organization in moving forward, including fundraising, development, and membership.” She considers the uptick in attendance at last summer’s League of New Hampshire Craftsmen’s Fair close to 24,000 visitors—as a sign that delegating tasks, cost cutting where necessary, partnering with private and public organizations, zeroing in on the local audience,  and undertaking a social media campaign go far in educating the public, especially young people and families, about crafts and craftspeople.
It is also good news that the League is experiencing a renaissance. “There is a resurgence of interest in membership among well-established craftsmen as well as the next generation makers. We are working to raise the proﬁ le of the organization within the state and beyond and embracing social media and other ways of connecting with a growing and diverse audience.”

One of the oldest and most recognized craft organizations in the country, the League grew out of efforts during the Great Depression in the mid-1920s to promote craft. Mary Coolidge opened a crafts shop in Center Sandwich and A. Cooper Ballentine started craft classes in Wolfeboro. They joined forces to sell locally made handicrafts to support the local economy. By doing this, they ignited a craft movement that swept the state, and in 1931, Governor John Winant established the New Hampshire Commission of Arts and Crafts (now the League of New Hampshire Craftsmen), making New Hampshire the ﬁrst state in the nation to support crafts. The League maintains eight afﬁliated Fine Craft Galleries located in Concord, Center Sandwich, Hanover, Hooksett Welcome Center (Northbound), Littleton, Meredith, Nashua, and North Conway. The  League Fine Craft Galleries exclusively feature crafts handmade by juried League members.  Most of the galleries offer a year-round schedule of demonstrations, exhibitions, and classes and workshops for all ages. For more information, visit www.nhcrafts.org.