The need for seeds

by By David Brooks | Home & Garden, In Print

When spring comes, gardeners itch to get plants into the soil. The same goes for foresters.

Tree lovers are descending on the Concord area every year to pick up their annual allotment of bare-root seedlings from the State Forest Nursery, which began by providing baby pine trees for reforestation in 1911 and now sells everything from spruce and walnut seedlings to native grapevines to a “pollinator package” of flowering plants that sold out the instant it was offered.

“Over the years we have shifted more toward a wildlife focus,” said William Kunelius, nursery manager for the Boscawen facility at 405 Daniel Webster Highway. “There’s an emphasis on shrubs and mast-producing trees for wildlife habitat, and a lot of Christmas tree seedlings for Christmas-tree farms.” (“Mast” is a term for nuts, berries and other plant items that wildlife eat.) 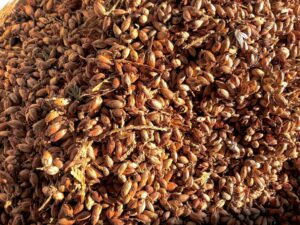 Ordering from the nursery catalog, which comes out in December, is a family ritual in my house. Our property is sprinkled with trees and bushes purchased over the years and even though half of them die from drought, hungry deer or other problems and many of the firs have become Christmas trees, the state forest nursery has still made a big impact on what we see when we stroll behind the barn.

We’re not alone. The nursery’s offerings have always been popular but lately it has been overwhelmed due to COVID-19 keeping everybody home and thinking about planting, and climate change making everybody more interested in trees.

“This year so far we’ve sold 240,000 seedlings, a new record in value,” said Kunelius, speaking more than two months before seedlings could actually be picked up.

About two-thirds of its customers are homeowners like me. Christmas tree farms make up the bulk of the rest – the reforestation efforts that launched the nursery are mostly a thing of the past. “One of the benefits of the East Coast is that forests regenerate on their own. It’s very different from the West Coast where they still do a lot of reforestation.”

Growing enough bare-root seedlings isn’t easy. (“Bare-root” because they are not potted or sold in soil, to avoid competing with private nurseries.) It begins with getting enough seeds to plant.

Some they buy. The nursery sticks almost entirely to plants that are native to the state, although there is debate about shifting to species from southern New England that might move north due to the climate change, such as shagbark hickory. But most of the seeds that are planted are collected either from bushes, from orchards of various nut trees that have been planted out behind the nursery buildings or, in the case of evergreens, from cones.

The best collection method is with Norway spruce. “Squirrels go up just before the cones are ripe. They’ll chew it off from the branch, let it fall on the ground, then run around on the ground, pick them all up and put them in a big pile called a cache,” said Kunelius. “We basically go and raid the cache. They get pretty mad.”

Getting seeds out of these cones is a multi-step process involving equipment that would fit into an antique farm display at Shaker Village, including a tumbler that appears to be made of scrap lumber, chicken wire and bungee cords. Not even the most penny-pinching of anti-government groups could fault them for wasting taxpayer dollars on that equipment.

The nursery has three full-time and a half dozen seasonal employees with an operating budget of about $220,000 plus some money from timber sales. It occupies about 900 acres, most of which are woodlands.

A bushel of cones produces around 3 pounds of seeds, depending on the species. That’s a lot of seeds: There are 30,000 in a pound for balsam firs, for example. After they’re cleaned and sorted they are either planted and put in a greenhouse to start growing, or placed in plastic bags and stored in a walk-in cooler for future use. Seeds last almost indefinitely there: Kunelius showed one bag dating to 1988, when he was three years old.

Even with all this care, Kunelius said a 40% germination rate is pretty good. The seedlings are planted in the ground to be harvested between one and four years later, depending on the species and customer. Christmas tree farms like bigger seedlings, so it takes four years for their plants to mature, while mine are just a year or two old.

Like anybody growing things, the nursery sometimes struggles against nature. It lost an entire field of trees to root rot that is now affecting the orchard of balsam firs, which will probably have to be removed.

But judging from its popularity, expect this Concord institution to keep churning out seedlings for many years to come. Even if the squirrels get mad about it!