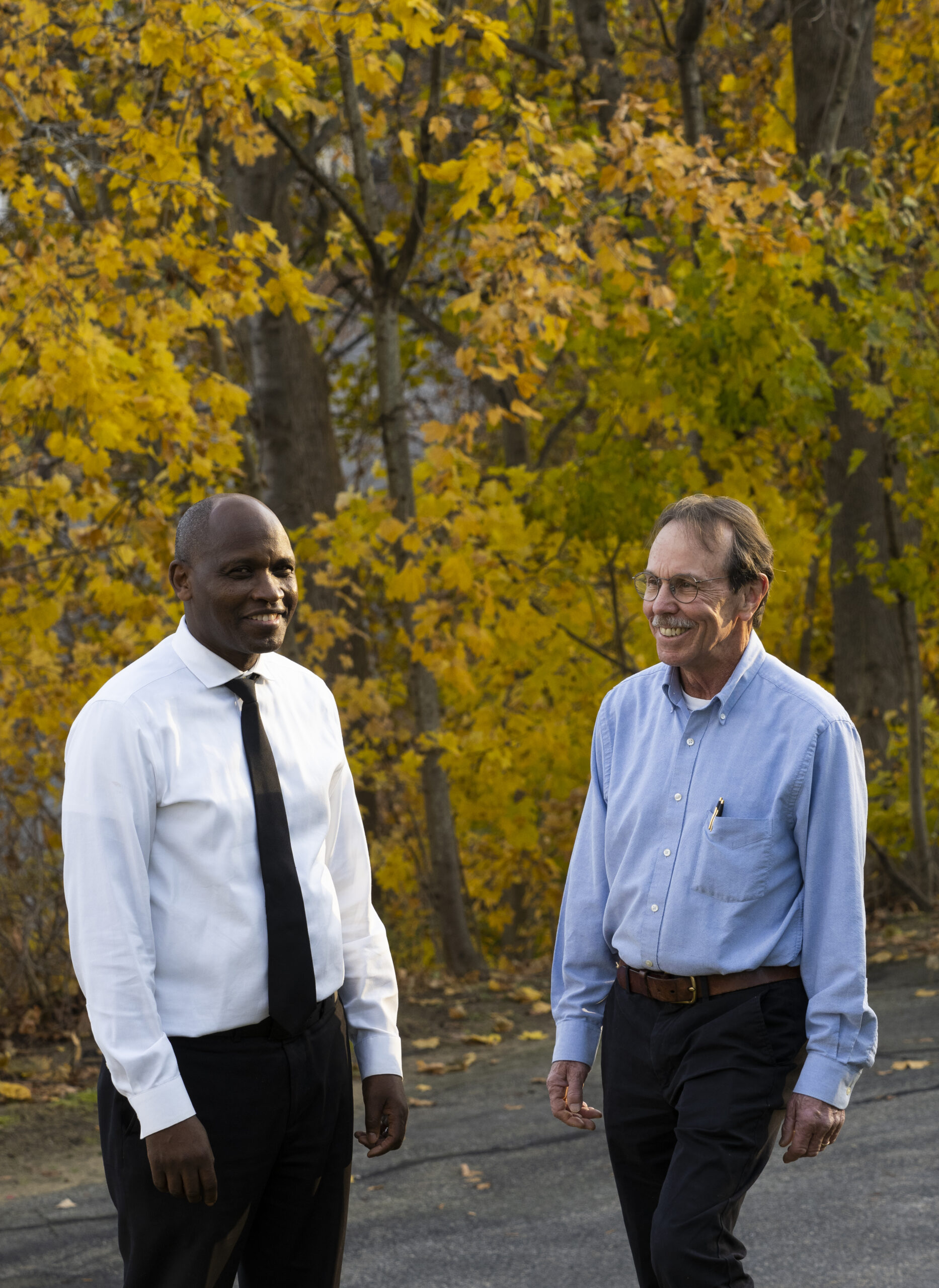 Clement Kigugu was on an airplane in the winter of 2006, preparing to land in the United States for the very first time when he realized just how challenging the language barrier was going to be.

Kigugu, who was on his way to the U.S. from Rwanda as an asylum seeker, spoke French, Kinyarwanda, Swahili, Kirundi and Lingala, but no English. When the flight attendant handed him a form to fill out with his future U.S. address, he could only look at the paper in confusion. When the plane landed at the D.C. airport, the confusion only grew.

“I had thought it was only the flight attendant who didn’t understand French, but it seemed the whole airport didn’t as well,” Kigugu said, addressing an audience of nearly 200 people at the Concord Chamber of Commerce 102nd Annual Meeting gala in early November this year. “I thought the American people had conspired to pull a prank on me as a welcome to America. I had no idea how to ask for help. The only words I knew were ‘good morning’ and ‘how are you.’”

Today, Kigugu is the founder and executive director of Overcomers Refugee Services, a resource center for Concord-area refugees and immigrants, that provides them with practical support, education and cultural orientation. They assist newcomers with applications for food stamps, Medicaid and housing, with resumé building and job interview prep. They also offer cultural orientation and conflict-resolution for people who fled countries torn apart by violence. 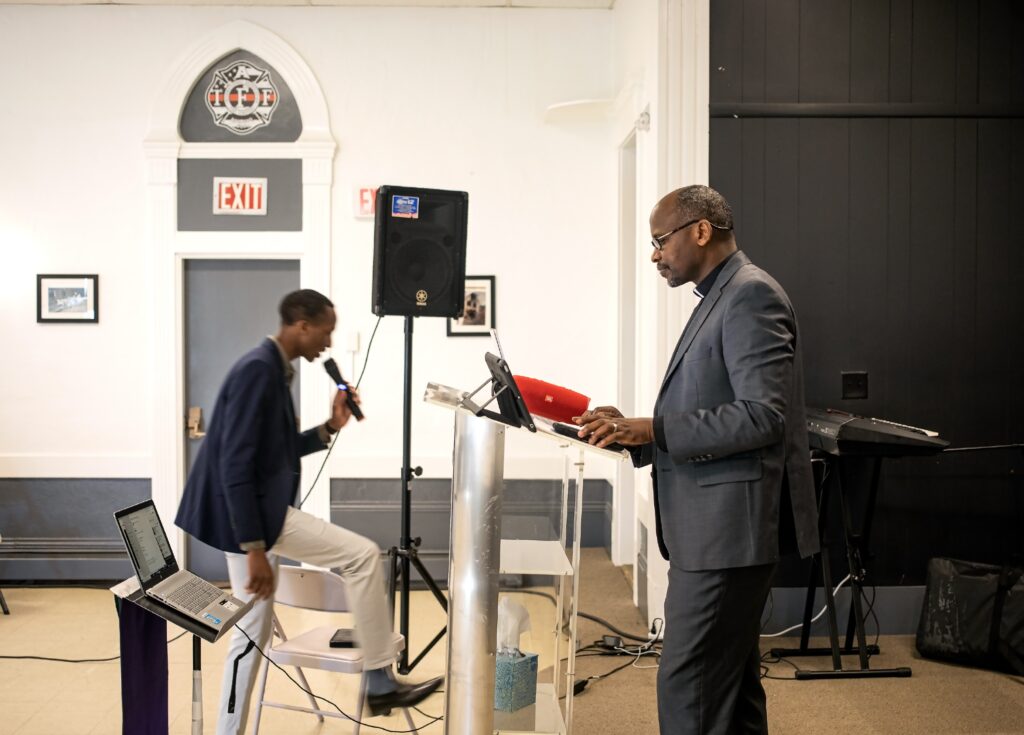 Pastor Clement Kigugu looks over his sermon as Alex Muyoboke works on the system before his video streaming to his constituants on Sunday, March 22, 2020 at the International Association of Fire Fighters building in Concord.

Kigugu already had a college degree and had a job running a non-profit that aided victims of genocide, war, and HIV in Rwanda, so the language barrier when he first arrived in the U.S. felt like a huge career setback.

“It’s putting you back again. The job, you start again from zero. You have to start learning the language, you have to have other people to help you while you know that you used to help other people,” Kigugu said. “That’s the real challenge, not only physically but also psychologically and emotionally, it really touched my life.”

Kigugu credits much of his success to Second Start, a Concord alternative education organization that offers English language programs for adults, and the organization’s long-serving executive director, Jim Snodgrass.

Snodgrass, who recently retired from Second Start after 47 years, was named 2021 Citizen of the Year at the Chamber of Commerce gala. Kigugu spoke at the event about how Second Start gave him the English language skills he needed to be successful in New Hampshire, and the care that Snodgrass showed in wanting him to succeed. 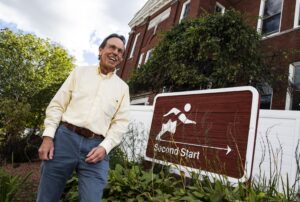 “Jim is someone who is very near and dear to me,” Kigugu told the audience. “He continuously inspires me not to look down on myself but to maintain courage and self confidence. He took me to different places to speak, building my public speaking skills….Jim, thank you for your support and always believing in me.”

For Snodgrass, establishing English language programs and helping new Americans learn to operate an automobile on New England roads was a way of giving people the skills to start their new lives in the U.S.

“You underestimate the language barrier,” Snodgrass said. “I mean if you can’t speak the language, you really do feel like a middle-schooler or elementary-schooler, you got to kind of depend on everybody else. That’s why I think trying to develop the language skills is a critical piece. I also think that driving is a critical piece, which is why we have the driving school.”

The number of English Language Learners at Second Start has grown exponentially over the last decade, and now make up the majority of the organization’s student population. When the school first launched in the 1970s, Snodgrass said, the ESL population consisted of a few students from Korea and Greece. In the 1990s the Balkan wars brought more refugees from Southeast Europe, and in 2001 the ESL population at the school almost doubled. Now, many of Second Start’s ESL learners are from central-African countries and Bhutan. Snodgrass led the creation of the New American Driving School in 2018, to serve the large population of new Americans who don’t have U.S. driving licenses.

Snodgrass met Kigugu when he first arrived at Second Start as a student.

“I just saw him progress, really working hard on his English,” Snodgrass said. “I’m not sure I would have the ability to do that, so I admire that tremendously in him. And he’s always been a giving soul. I don’t know how to phrase it, but he’s for helping people. And I am too.”

On a recent Friday morning, Kigugu gazed around the sunny third-floor classroom of the Second Start building on Knight Street – the same room where he took his first-ever English language class. The tables were arranged in a U shape, and he pointed out the central back-row chair he used to sit in.

“When I saw the class for the first time it was a good experience for me, because when I met with other people from different places, who also struggled with the English like me,” Kigugu said, “it gave me courage.” 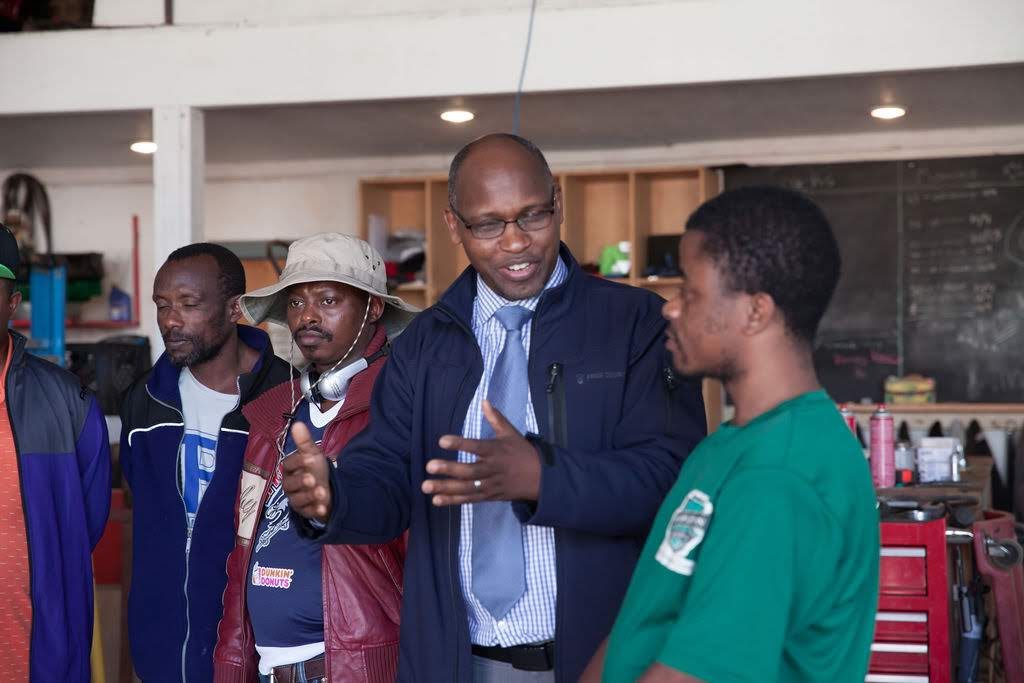 Clement Kigugu, the executive director of Overcomers Refugee Services, provides guidance and assistance to members of the community.

Kigugu worked long hours in the early years, holding down two jobs at Concord Litho and Walmart, while also attending Second Start. When his wife and their six children joined him in the U.S. in 2008, balancing the responsibilities became tricky and he continued his studies at home with a volunteer tutor.

“I am a strong person due to the circumstance I pass through,” Kigugu said. “From all the things that I went through, it helps me to be more strong. It’s very, very stressful. But I was very strong to overcome.”

Snodgrass began inviting Kigugu to speak at local events like Rotary Club gatherings, where he spoke about his experience with Second Start. For Kigugu, it was a chance to network, to improve his English and public speaking skills – but says he viewed it as a chance to promote Second Start and give back to the organization that helped him.

Kigugu became a medical interpreter, then a caseworker, an employment specialist, a church pastor and ultimately founded Overcomers Refugee Services in 2013 when he saw the high need for services among new Americans. The organization now serves about 243 families.

“It’s daunting for people to come here and not know how anything works,” Snodgrass said, “And he’s been able to connect them with services, develop understandings about how it works in the United States, from applying for aid for certain things, or what you’re eligible for, to completing paperwork that you need. I think he’s provided a significant service.”

At Overcomers Refugee Services, Kigugu says, they follow the rule of three ‘E’s’ when thinking about how to serve their demographic: educate, empower and engage. 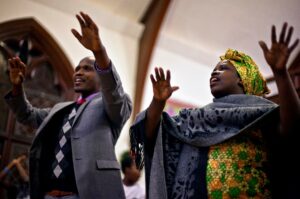 Pastor Clement Kigugu and his wife Esperance sing at the Christmas eve service of the Overcomers Church of God held at the United Baptist Church on Fayette Street in Concord. The service lasted until the early morning of Christmas day.
(GEOFF FORESTER / Monitor staff)

“Our goal is really to educate people, to teach them how to fish, so that way they can fish themselves and kind of keep receiving what we give them, but they can also do by themselves and help other people who come after them,” Kigugu said. “Like the Second Start did, to teach me English, so then also I can impact other people’s life.”

For Kigugu, who now sits on the Board of Directors at Second Start, it’s important that the families they serve feel the same way he does about paying it forward.

“I love to be part of the City of Concord and to feel like this is my home, and I have to contribute, I have to have to give back to what I receive,” Kigugu said. “To do that, I also need my community to really feel that way.