Setting Her Own Style

by Eileen O’grady | In Print 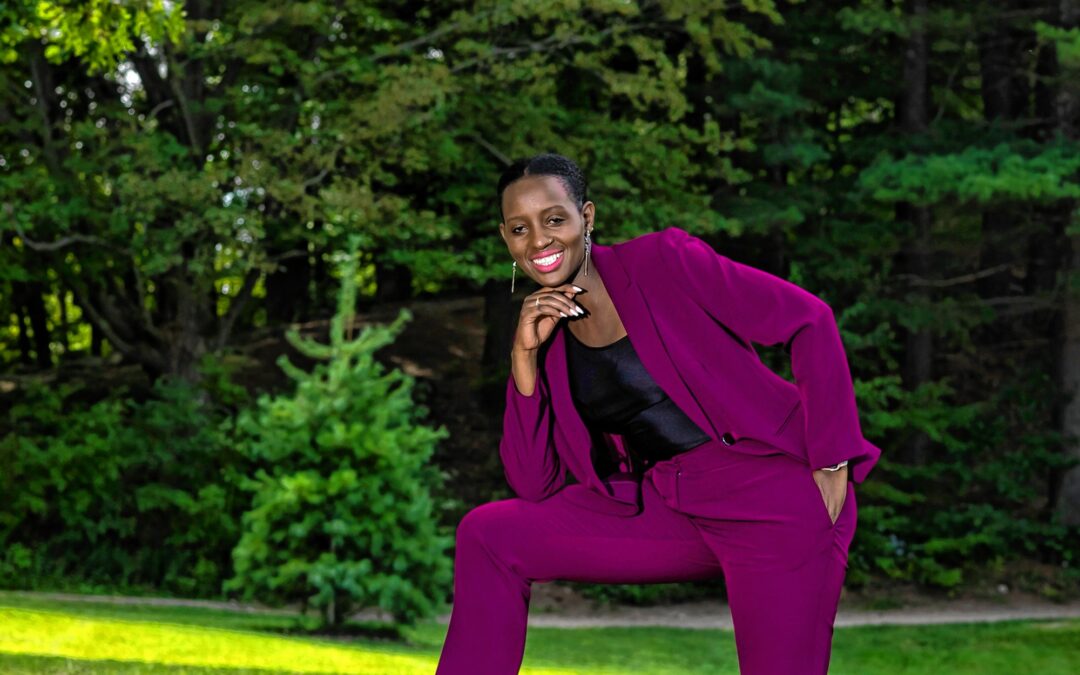 The first time Emelyne Adios wore kitenge fabric in a runway show, she fell in love.

The New Hampshire fashion designer, who was in her early 20s at the time and working as a model in Burundi, was assigned to wear a jacket made from the vibrant African print fabric at an event that showcased international fashion. She couldn’t get enough of the outfit.

“I looked so good,” Adios said. “You know, when you have that confidence I had never had in my life. I just fell in love with kitenge, with the fabric.”

Adios begged the designer, a Kenyan woman, to let her buy the outfit she had worn in the show, but it was far out of her price range. The disappointment was acute, but it got her thinking.

“What if I can make that outfit for myself?” Adios said. “I can do that and walk in my own clothes.”

Adios, now 30, is a New Hampshire fashion designer and health care worker who runs her own small clothing business, Style by Emelyne. Her modern designs, made with bright kitenge fabrics, have been featured locally in shows at the Concord Multicultural Festival and the Organization for Refugee and Immigrant Success gala. 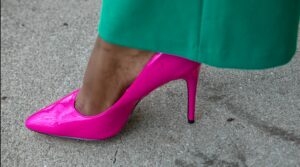 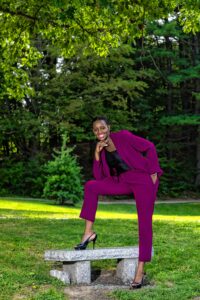 “I’ve always loved fashion, I love color,” Adios said. “I think it’s who we are. As long as you’re comfortable with what you’re wearing and you feel good inside, I don’t know if I was someone who cares much about what people think. At the end of the day, do I feel confident? Do I feel happy inside?”

Growing up in Burundi, Adios was a self-described “tall kid” who at 6’1” played basketball at her family’s suggestion but always dreamed of being a fashion model – a plan her father wasn’t initially convinced would be a reputable profession for her.

Itching to chase her dreams, 15-year-old Adios feigned illness one weekend to avoid a family visit to her grandparents, put on her best church outfit and took a bus to a model casting. Although she said she was so nervous she could barely walk straight in the audition, her daring paid off. She was one of 10 girls chosen out of 189 applicants and got signed to her first modeling agency, Agence Esther – much to her younger sister’s envy. Her father got on board with the idea after learning that the agency valued academics and upstanding behavior.

Adios went on to model for fashion shows and ad campaigns in Burundi and Uganda. Filled with creative inspiration after her first experience modeling kitenge, Adios taught herself how to sew from watching YouTube videos. It took her weeks, but when she finished that first project she said she had a smile on her face.

Adios says her fascination with using kitenge in her designs comes from its long tradition of everyday use by women in Burundi, who have historically used the inexpensive and easily-accessible textile for everything from hair wraps to baby slings and even reusable menstrual pads.

“This fabric is just so much more, especially for women,” Adios said. “If we can have one fabric that they use for all of this, we are not poor.”

Adios, who sews her designs out of her Manchester home, says in an era of fast fashion it’s hard to make some customers understand that handmade items cost more because of the time and labor associated with them.

“People don’t know how much we put [into] making handmade clothes,” Adios said. “They don’t really know it takes a lot of time to put all the pieces together.”

In her own wardrobe, Adios values quality over quantity and says she would rather buy one unique and interesting piece she loves than an armful of generic fast-fashion clothing. 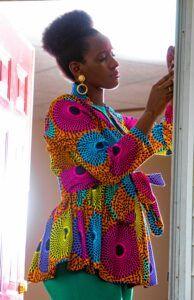 “To have a lot of clothes is good, if I can afford them,” Adios said. “But when you wear those pieces, let’s say you’re going to work, knowing that your coworker is going to look at you and say ‘you look so good.’ But do you look good to you? Is that you?”

Since coming to New Hampshire in 2014, Adios has modeled jeans for a Massachusetts company and organized a fashion show in Maine as a fundraiser for Uganda. Her designs have been featured at New Hampshire Fashion Week, the 2018 Black New England Conference at UNH and in an exhibition at the Sarah Orne Jewett House museum in South Berwick, Maine.

Although she is living in Manchester, Adios feels most at home in Concord, where she often works. In the early years of living in New Hampshire, when she felt homesick for Burundi, she would often go to White Park to walk or relax by the pond.

“I love everything here,” Adios said. “I used to just watch the water. It would make me feel calm, like I am somewhere where I belong.”

While striving to grow her business, Adios has been working as a medical interpreter with Language Bank, including at Concord Hospital and the Department of Health and Human Services in Concord. Adios, who speaks five languages, wants to use her skills to help people who face a communication barrier when accessing treatment.

“I don’t want to see my people struggling at the hospital,” Adios said. She is a big advocate for mental health, and tries to encourage the new Americans she works with to take care of their mental health as well as they would their physical health.

At the height of the COVID-19 pandemic, when health care workers were in high demand, Adios became a nursing home aide in Durham and Goffstown. Although Adios has asthma and was afraid for her own life at times, her thoughts were focused on the vulnerable people who needed her help. Adios remembered one particularly difficult overnight shift where she was the only one on the floor due to short staffing, her asthma aggravated by the disinfecting chemicals and only a plastic bag to wear, due to a PPE shortage.

“I’m like, ‘I am going to sit here for eight hours in this plastic,’” Adios recalled. “I felt like I was going to die, it was the middle of the night, and I started crying. I was like, ‘I am the only one here, and if I go home, nobody is going to help these people.’ So I was like, ‘you know what? I’m not dead yet.’”

As the virus ravaged her nursing home, Adios said she would leave work not knowing if she would return to find a patient’s bed empty. Unable to give hugs or provide much comfort after patients were moved to the COVID-19 unit, Adios began exchanging written notes with one older patient, a lady who had a routine of telling Adios she loved her every night.

“One night I went there I found out she is gone,” Adios said. “I stopped going there. It was just killing me. I got attached to people so quick. And COVID was quick.”

Adios’s passion for helping others permeates every part of her life. Adios sponsors the education of seven orphan children back in Burundi, who all call her “mom.” The oldest is now in college.

She has also started an initiative to raise money for pregnant, unmarried girls in Burundi, so they can pursue their education and support themselves and their children instead of being forced to enter into unwanted or unsafe marriages.

“I don’t want anybody to give up because they don’t have this help,” Adios said. “If I am going to be the one who believes they can be something, I want to do it.”

In Concord, has she organized a “pack a purse” drive to collect purses filled with essentials like toiletries and other essentials for homeless women. She also mentors New American girls and started a mentorship program for adults in Manchester, walking in the park and providing company.

Adios says she is looking forward to collaborating with other designers and putting on more fashion shows here in New Hampshire, so she can see more people wear her clothes. Adios likes her shows to be diverse, with models of all sizes and ages including moms and kids.

“We don’t all have to be the same size or have the same style, as long as you’re comfortable,” Adios said. “For me the beauty is our differences – that we all just be there, get together and we make it fun.”

Although friends occasionally encourage Adios to move to New York or Los Angeles, where there is more fashion activity, Adios says she’d rather stay here and work to build New Hampshire’s fashion scene.

Adios’s fashions are available for  purchase on her website, www.EmelyneAdios.com along with links to donate to her  causes. u