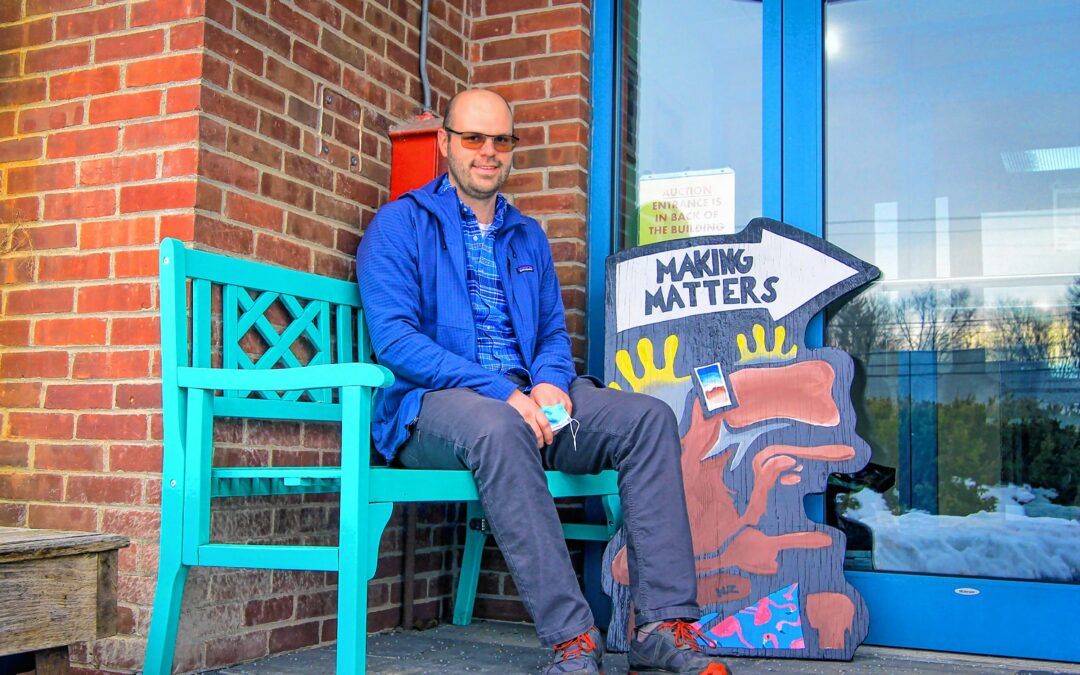 Last February, Making Matters NH opened its doors in Concord, aiming to be a makerspace “for the community, by the community,” according to its president Jared Reynolds.

The coronavirus pandemic set them back somewhat; barely a month after opening, the makerspace had to shut down events until the beginning of June. Despite that, Reynolds said, the makerspace is going strong and they are more eager than ever to welcome new makers to the space.

The makerspace provides community access to expensive equipment for personal professional DIY projects. Additionally, Reynolds said, the goal is to provide a collaborative environment for like-minded people to interact and hone their skills.

“Each makerspace is a little different,” Reynolds said, adding that this one “is a bit mixed” between arts and business. The space hosts events for small businesses and has an entrepreneurship focus while also catering to the Concord art scene.

It also allows local businesses and artists to rent office and work space within the makerspace, in an effort to provide affordable places to do work.

Reynolds said the makerspace currently has eight artists and small businesses working out of the space, with room for more.

People don’t have to be local artists or business-owners to take advantage of the space, though, with memberships open to everybody. “Anyone can become a member of the space,” Reynolds said, and people “of all experience levels” are welcome.

“When you become a member, you join a community, so people are open to mentor or teach,” Reynolds said. “It’s a whole range of people” in the space, he said, and “the goal is to make it inclusive and welcoming regardless of their background or experience.”

If becoming a member is too daunting at first, however, there are other options, Reynolds said. The makerspace offers a variety of classes, which are open to anybody, member or non-member. They encompass topics from jewelry-making to woodworking to a 3D-printing beginner’s course that started recently.

“We’re always trying to find ways to make them more accessible,” Reynolds said, including methods like offering scholarships for the classes. The makerspace is “always willing to work with people on how to make the space accessible and ensure the community can use it.”

The most important objective is to “try to introduce new people to making so they can try making their own projects,” Reynolds said.

A good first making experience, according to Reynolds, would be a beginner’s woodworking class, specifically one where the objective is to construct a box.

Reynolds said this is a good starter project because the result is not only small but requires “all of the different types of cuts,” so first-time makers get experience with many different pieces of equipment.

“It’s a doable project for someone to take on, learn those skills and decide if they want to take on a bigger project,” said Reynolds.

Another way to get involved in the makerspace as a beginner is to simply explore the space through an open house. While these events had to be put on pause for some time due to the pandemic, they’re back now, with mask requirements and social distancing rules in place. Reynolds said that people can come, “see what we have to offer, ask questions,” and “see some of our equipment in action.”

According to Reynolds, the idea of creating a makerspace in Concord started circulating in early 2018, when he and other members of the Making Matters NH team “started talking about getting a makerspace started in Concord, and looking at what that would involve, how we could fund it, what the community would want in a space.”

Reynolds himself became interested in the makerspace due to his past experience with similar community-based efforts, working in community health in rural Alaska and as a volunteer for the Peace Corps in Morocco. Reynolds said that through these experiences he saw the “vital role of citizen participation” in “creating successful communities,” which is what Making Matters NH strives to bring to Concord.

Reynolds said that he and a group of interested community members had a number of meetings about getting the makerspace up and running. It took months of concerted volunteer effort, but eventually, the group received funding and found a place for the makerspace to call home.

“It became more real and concrete when were actually able to find that physical space,” Reynolds said.

The funding came from a few different avenues, including from the United States Department of Agriculture and the Capital Regional Development Council. Some of that funding made it possible for Making Matters UNH to find its permanent physical space, but a lot of it went and continues to go toward the makerspace’s tools.

“The tough part is finding funding to buy equipment,” Reynolds said, although the makerspace is still receiving funding for various new projects and procurement of new equipment. “We’re definitely still looking for funding,” Reynolds added, funding that will go toward buying things like a long-arm quilting machine, which Reynolds said was “unaffordable” for people to buy on their own. Another round of USDA funding is currently slated to go toward a new classroom, conference room, and space for fine art.

The Making Matters NH makerspace is “low-barrier,” Reynolds said. “if you’ve never been in a woodshop or touched a piece of equipment, we want those individuals to come and try it out.”

The makerspace has open houses on every second and fourth Monday of the month from 6-8 p.m. for interested individuals. For more information, visit their website or email info@makingmattersnh.org. u