QA – Even amid all the uncertainty, Mark Ciborowski continues to move ahead with his vision for Concord

by John Mattes | Community, In Print 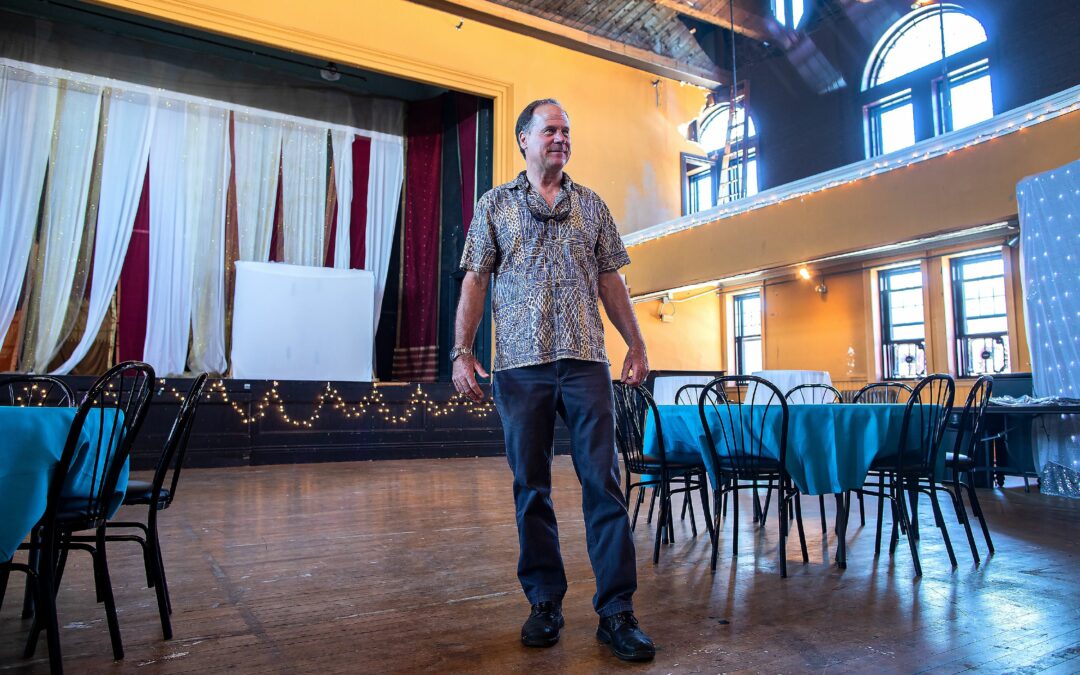 Mark Ciborowski and his family were the subjects of one of the first articles in the premiere issue of Around Concord
magazine in the winter of 2007-2008. His family has been developing real estate in the Concord area since the mid-1960s. As part of our 50th Issue Celebration, John Mattes caught up with Ciborowski downtown at one of his landmark buildings, Phenix Hall on Main Street.

John Mattes: How many properties do you own now in Concord?

Mark Ciborowski: Myself and my family own 14 properties of which we’re kind of going through a transition now. My grandfather, Jacob, started buying the properties in the mid-1960s. I came to Concord just before 1980 and started working with my grandfather in real estate, and kinda took over. It was really his dream that I would come to Concord and some day work with him. And through fate, the fate mainly being a car accident that brought me here to help him out (during his recovery), that it came to be. I guess the accident was a blessing in disguise because I don’t know what would have happened. But it brought me here and it’s been a great journey, and the journey continues. And Concord has come so far since the first issue (of Around Concord). We’ve also had the Main Street Project, which was an overwhelming success and transformation of downtown. You used to come downtown on a weekend, Saturday or Sunday, and it was pretty dead. Spaces were pretty much empty with not a lot happening. You come downtown on a Saturday or Sunday now, all the spaces are full. People are out walking about. It’s a very walkable, enjoyable downtown. Obviously now we have a very challenging time with COVID. And we’re all trying to hang on and get through to the other side of this pandemic, which is hurting, businesses, families, people. Very challenging.

JM: No question. But one of the bright spots downtown is where we’re standing right now, Phenix Hall. Could you give us a little bit of its history?

MC: Yes, absolutely. It was originally built in 1855. Abraham Lincoln spoke here on March 1, 1860. Gave a rousing speech to the big issues of the day. He was contemplating a run for the presidency at that time. He gave a speech to a packed house about the pending civil war, slavery. It was a few months after speaking here that he actually declared his candidacy and went on to become the 16th president of the United States. And ironically, Edwin Wilkes Booth, the brother of John Wilkes Booth, who assassinated President Lincoln, was a Shakespearean Vaudeville actor, and he performed here. So, Lincoln spoke here and the brother of the guy who shot Lincoln performed here. So, the history of this room is incredible. If these walls could talk! Unfortunately, in 1893 there was a large fire in the building here that pretty much gutted the interior. It was rebuilt pretty much entirely from what we can tell. And then in 1912 Teddy Roosevelt spoke on this stage. Presidential speeches, big parties, big dances, big public gatherings, weddings, funerals, you name it. This is where the community gathered for about a hundred years until I believe it was 1956 when the upper floors of the Phenix Hotel (now CVS Pharmacy) burnt off and there was a walkway over Phenix Avenue that went with it and cut off access to the building at that time. And the building went silent, or dormant, until the mid-1960s when my grandfather bought it. In 1973 he put in this elevator and the stairwell that’s here now. But there’s still only one good means of egress and no lobby, and he really didn’t have any plans to utilize the space after the renovations that he did do. Now I’m hoping to carry the Renaissance of Main Street to the next level. I think Phenix Hall renovated would be an incredibly vibrant nighttime attraction. Nightlife is something that would add a quality of life for the residents, even for economic development, when a family or a business considers moving to Concord I think they look at amenities like this. And I think a renovated Phenix Hall would be of amenities that really moves the needle and makes Concord an even more desirable place. It’s already an extremely desirable place. And it would be another plus in the column. And it will complement the Capitol Center for the Arts and the Red River Theatres. We have some great institutions downtown now already. This will be a little bit different, more of a nightclub feel. There will always be live music when it’s open. It’ll be a full restaurant, so that you can sit down, have a meal and hear some nice background music during dinnertime. And then after dinner, have full bands. You could sit in the balcony or sit at an incredible Brunswick bar (50-plus feet long) that’s going to be a statement piece in the room. But I also see it being used for other events, for political events. I want to bring presidential politics back. It has this perfect town hall feel to it. I could see presidential primary debates happening here. Certainly, at the very least, it could be a place for candidates to give their stump speeches.

I think it’ll be yet another reason for people to come downtown, add that much more vibrancy, that much more nightlife, which helps the area restaurants, the area stores. It helps commerce in that way. And I see this as just the first step of a very, very ambitious project. Step Two is to tear down the CVS building and put a new five-story building there, and on that building I want to have a living roof deck with trees and plants and have an incredible rooftop venue. So, whether you want rooftop dining, or rooftop weddings or other parties, you’d have a spectacular rooftop venue. And if you’re having a big event and the weather doesn’t cooperate, you could always have Phenix Hall as your fall back place. So, I think the two together will be a very powerful combination of venue spaces.

CVS right now is what we call a gap tooth. It’s a gap in the skyline. So we want to get that back up to the four- or five-story height and fill that hole in the city street, as well as add to the tax base to the city, the rooftop deck. And at the same time CVS when I redo that I want to have some basement retail, so that we’d have a B-level Main Street down on Low Avenue. A lot of cities like Portsmouth and Portland have their own back alleys that are like restaurant rows. And in the North End right now we have Chuck’s Barber Shop and Tandy’s. And unfortunately Eagle Square Deli was a victim of the COVID, but I’m sure we’ll have another restaurant go in there, so there will be three restaurants in the North End. In the South End we have Angelina’s, Revival and Cheers. So we’ve already got three restaurants on each end and if we upgrade Low Avenue with a few more retail shops and restaurants, that could be a nice vibrant B-level Main Street. And Storrs Street is going through a whole transformation right now with Starbuck’s and the Club 110 that’s going to go in there. … We’ve got some big presence right now on Storrs Street. You’ve got Hermanos Restaurant, you’ve got Cheers, you’ve got Concord Craft Brewery. So, I think that Main Street has always been very linear north and south. We’ve been long and skinny. If we can get a little wider, and if we can step up Low Avenue to be more vibrant with a lot more pedestrian activity and then bring up Storrs Street as well it will really get downtown that more balanced feel with more variety.

JM: One of the things you discussed in the original issue was the Riverfront and wondering if that could turn into a public park area, getting rid of the shopping plaza. That’s not part of the plan now, right?

MC: It’s not part of the plan right now. There have been numerous subgroups, committees and plans. Way back when they were doing improvements to Exit 13 of I-93 there was talk of maybe moving the highway to other side of the river. But now, with all the improvements they’ve made to Exit 13 it’s my understanding is that’s completely off the table right now. There’s been talk about putting the highway lower for a stretch to make for more park and walking area down by the river.

MC: Yeah, exactly, a Mini-Dig instead of a Boston Big Dig. That would be incredible. I don’t know whether it happens. Of course, we’ve talked about pedestrian walkway bridges over the river to the nice farmland, and the other trails right along the other side of the Merrimack River and that section’s going in now.

JM: What’s the greater vision? When you spoke to us the first time in the first issue, it was a lot about keeping the architecture of the 1850s downtown. Are people still talking about that? Is that one of the reasons you want to redo Phenix Hall?

MC: Yes, well, I want to do it for many reasons. I feel I’m a steward of this historic site. … We’re fortunate that we have some of our 1880s buildings that are still intact, so Concord’s architecture is beautiful. In all of my properties and renovations I strive to maintain and restore that architecture, I love that period of architecture. I think the craftsmanship is incredible. It adds to the charm and beauty of what Concord is.

JM: We talked just a little bit about how long (the Phenix Hall) project was going to take.

MC: We certainly had planned to have it under construction by now. Certainly, Covid set the schedule back on a lot of things, this included. There are still some hurdles to be worked out. I would like to break ground in the spring and . . . then be open by the spring of ’22. It would be a great boost for the downtown post-pandemic. Hopefully there will be a day once again when people can get together and congregate again, and be in a place and raise a glass and eat, drink and be merry.

There are still a few challenges that I need to work out with the city. Access to and through the alley way and use of the alley way. Those are certainly key to being able to move forward. But we’re working hard and soon it will be here..

JM: We can’t wait for those days to be back.