Big taste in a small town

by By Tim O’sullivan | Food & Drink, In Print 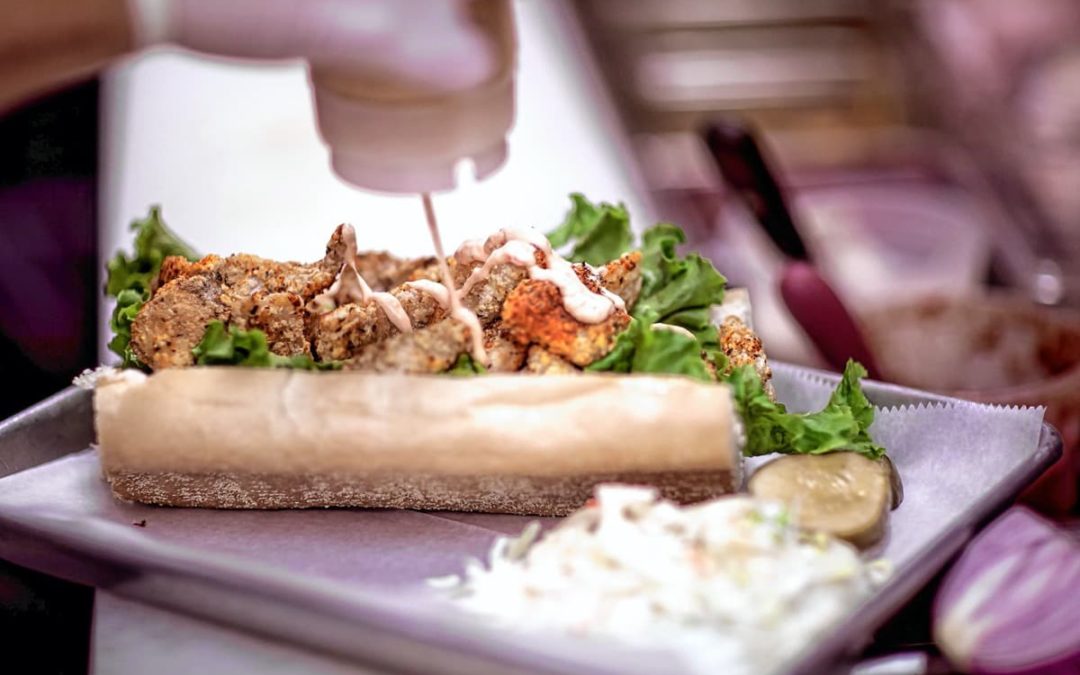 After driving 20 minutes north of Concord, through the woods of Salisbury and into Andover, you might not expect to find a lunch spot that serves a Vietnamese-style Bahn Mi sandwich with 12-hour roasted pulled pork and liverwurst. Or a Po Boy Sub with crispy fried Creole cod and pickled red onions. Or an award-winning chef who has drawn attention from the national media.

But that’s exactly what you’ll find at The Kitchen Andover.

“When you get a turkey club from us, we roast the turkey, we hand slice it, it’s roasted shallot mayonnaise, we do fried tomatoes and we use fried pork belly instead of the bacon,” said Michael Prete, the chef/owner at The Kitchen Andover.

Prete, 50, grew up in New Jersey but spent his summers at Lake Winnipesaukee. He eventually moved to New Hampshire in 1987 and began working in restaurants, and later as a private chef, in the Seacoast region. In 2011, he and former business partner Matt Greco opened the original The Kitchen in Portsmouth.

“We were going to open a burger restaurant, but the place we found had been a sandwich shop for like 27 years, it was called Celebrity Sandwich, so we thought, let’s do a sandwich shop, but just take it to another level, so that’s what we did,” Prete said.

The next level lunch was a hit. New Hampshire Magazine named it Best Seacoast Restaurant in 2017 and Prete won the People’s Choice Best Chef award from TASTE of the Seacoast in 2018. When regulars began asking for catering, Prete and Grecco said yes and started Portsmouth Catering Co., which has won six straight TASTE People’s Choice Caterer of the Year awards, from 2014 to 2019.

Word eventually spread beyond the Seacoast and The Kitchen was featured on the Food Network’s popular show “Diners, Drive-ins and Dives.” Being on the show was great exposure for the restaurant and Prete, who has a T-shirt signed by the show’s host, Guy Fieri, displayed on a wall at The Kitchen Andover. It also gave him a peak behind the television curtain.

“The crew was in our restaurant for three days and the first day I walk in and there’s a guy ironing (Fieri’s) button-down shirt, and another guy brought in this giant juice machine and he’s juicing (Fieri’s) juice and then this truck pulls up and they offload the red car (a 1967 Camaro Fieri drives in most episodes) and push it into a parking spot and start waxing the crap out of it,” Prete said. “And then all of a sudden it’s, ‘Ok, everybody, he’s coming, everybody be ready, he’s coming.’

“So, he comes in and it’s like (Prete pretends to plays a trumpet), but during those three days he was only there for like three hours, so it’s a lot of smoke and mirrors.”

Prete had a similar experience with Fox’s reality competition show “Hell’s Kitchen” back in 2006. The network flew him to New York and Los Angeles for interviews, but eventually Prete changed his mind about wanting to be on the show. He would have to spend more than two months away from his wife and newborn son, and he was worried about the “smoke and mirrors” side of things he later saw with “Diners, Drive-ins and Dives.”

“I was reading the contract and it said things like, they could use a shot of any of your facial expressions with any conversation, or take something you said and use it with something else,” Prete said. “And then I found out they have remote controls to shut off ovens and stuff like that, so no matter how well you’re doing they can make you look bad, so I was worried about all that and just decided to back out.”

Out to the country

Prete moved to Salisbury in June 2018 with his wife, Stephanie, and their three boys – 14-year-old Colby, who washed dishes at The Kitchen, 13-year-old Marcus and 8-year-old Noah. Just a few months later, Prete (amicably) parted ways with Greco, sold his share of The Kitchen in Portsmouth and moved Portsmouth Catering Co. into a space at the Bear Hollow Trading Post in Andover. As catering season began to wind down in the fall, Prete decided to transform the front part of his space at the Trading Post into a sandwich shop, and The Kitchen Andover opened in December 2018.

The sandwich shop did decent business its first year, but in a strange turn the coronavirus pandemic has actually led to more customers.

After the initial stay-at-home orders in March, Prete pivoted and turned The Kitchen Andover into a make-shift grocery store. He cut his bulk orders of chicken and beef into smaller packages and sold them for almost no profit. He and Stephanie, who runs the front of The Kitchen Andover, sold masks, toilet paper, flour, beans and anything else they had and the community needed.

“It was gangbusters, and the biggest thing was the appreciation from everybody. It was like we were the best thing since sliced Wonder Bread, and we were happy to be giving back to the community, and then that all worked out for us,” Prete explained. “I think we got labeled as, ‘the Portsmouth people,’ or people thought our food was too fancy. But once they came in here and tried it, they liked it, and then they kept coming back.

While COVID may have helped Prete’s restaurant business, it decimated the catering business, which was always the primary source of income in his financial plan. He had 28 events scheduled for this catering season, but 22 of them were postponed or canceled. And of the six that did happen, only one ended up being more than 100 people.

Prete moved most of his big 2020 events to 2021, so his weekend schedule for next year is pretty packed, but he’s still looking for clients that need catering this year or next year. It can be a small event in the middle of the week, a dinner at home for two, stocking your fridge for a weekend party or anything else that needs creative, fresh and delicious food options made on site – Prete has mobile wood fired grills, chargrills, frialators and whatever else he needs to bring his kitchen to you.

“With what’s going on right now, I’ll do whatever,” Prete said. “If you want me to come to your house and grill hot dogs, I’ll grill hot dogs.”

Asking Prete to grill dogs would probably be a waste of his talent and your money. Unless, of course, you ask him for his own take on the hot dog, and then you’ll probably get the kind of fresh and innovative food that feels unexpected in Andover but tastes just right after that first bite. u