For the love of cheese at Brookford Farm in Canterbury

by Alyssa Dandrea | In Print 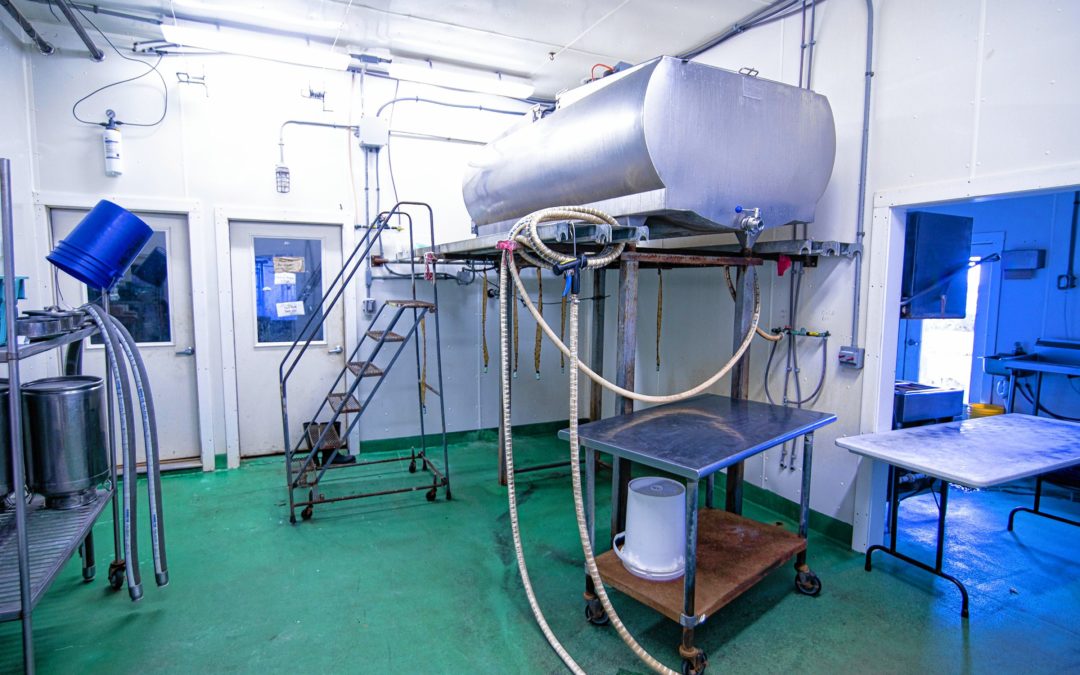 This semi-hard cheese teases the palate with the sweet taste of gouda but its smooth and creamy texture takes it up a notch. Just when it feels familiar, recognizable even, this favorite Brookford Farm cheese surprises with a balanced yet sharp finish.

“Dudley’s Dance,” as it’s called, is in many ways an ode to the town of Canterbury and its residents, who years ago supported husband and wife, Luke and Catarina Mahoney, as they set out to find a permanent home for their first-generation farm in the Merrimack River valley. More specifically, the one-of-a-kind cheese is named after Dudley Laufman, a Canterbury resident, dance caller and musician who will forever be linked to the tradition of contra and barn dances in New England, appropriately coined “Dudley Dances.”

For the Mahoneys’ family-owned farm, the coveted seasonal Dudley cheese and the new varieties crafted since help tell the story of sustainable and wholesome food practices that aim to enrich the land so it can continue to provide for generations to come.

“Our products are unique to this place, to the grass we grow, the cows we raise and to the people who work here,” said Catarina Mahoney, farm owner and creamery manager. “No one else can copy exactly what we do. Maybe they can make another cheddar but it’s going to have a different taste and texture.”

Brookford Farm uses organic farming practices that provide for a variety of 100% grass-fed dairy products, which includes cheeses made from both raw and pasteurized milk. The farm’s on-site creamery, built from the ground up under the Mahoneys’ direction, turns out approximately 25,000 pounds of cheese each year from cheddar to feta to blue cheese and cottage cheese.

The Mahoneys first experimented and educated themselves about the art of cheesemaking after realizing they needed to preserve excess milk produced by their large herd, composed mainly of Jersey and Normande cattle.

Catarina Mahoney wasn’t a cheesemaker when her family moved to New Hampshire from Germany in the mid-2000s so she set out to learn everything she could about the process, including by attending an artisanal cheesemakers’ program at the University of Vermont. She also studied up on making blue cheese – her husband’s favorite – and networked with others in the small farms and cheese-making communities.

“There is a lot of nervousness in the beginning,” she said. “You think, ‘Is it going to work out?’ and ‘What is going to come of this?’ It’s important not to give up.”

“It can be a rewarding process, especially having your hands in the milk and knowing what it could turn into,” she added.

The heart of the cheese is the milk, which on the Brookford Farm can change with the season. Because the cows are 100% grass-fed, there are more variables to contend with but sometimes that spontaneity can be fun and leads to unexpected results like “Dudley’s Dance” cheese.

“It was a mistake, and a good mistake at that,” Catarina Mahoney said. “Then we tried to recreate it. Well, that took a little while to figure out.”

For the artisan cheesemaker, the craft is about working close to nature and playing with what she provides at that moment or in that season.

“For farms that have corn-fed cattle or bring the same rations or type of food to their cows each day, there is a greater sense of consistency and predictability,” Catarina Mahoney explained. “Our process is harder but more rewarding.”

Soft cheeses like mozzarella have a higher moisture content and therefore a shorter shelf life; whereas harder cheeses like cheddar are not as creamy and can store for much longer.

On a recent day at the farm, a cheese vat began to mix 260 gallons of milk with cultures and protein particles, which together formed the basis of gouda. Within hours, the cheese took its shape, allowing an on-staff artisan to section it off for future storage in a nearby aging room. When ready, the cheese is sold at farmers markets and at the Brookford Farm’s own store on site.

With the continued support of the Merrimack County community, the Mahoneys hope that their business will continue to grow and that their boys will one day take the helm.

“The more people we can encourage to learn about the local environment and the need to support our local farmers, the more prosperous we’ll be together,” Catarina Mahoney said. “That is the only future for our dairy farms.” u