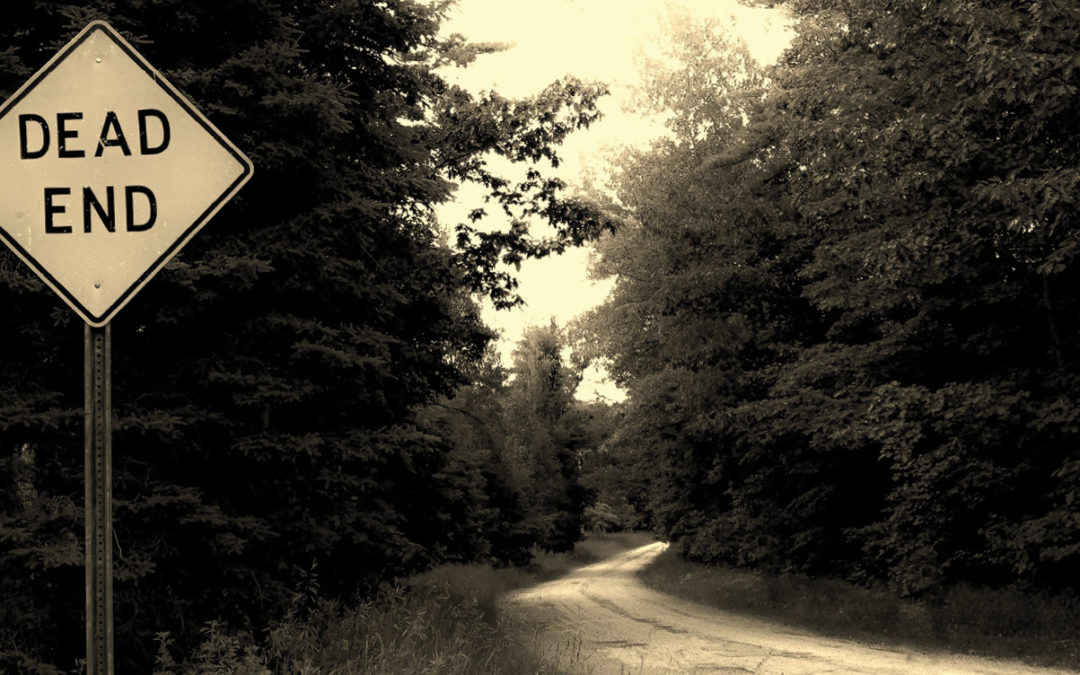 Several roads spiral outward from the village that Lydia calls home. Most days, she and Tom would choose one for their morning walk, but not today.

Tom says he’s going to rake the leaves instead. It’s not much of a job in their small yard with only a few maples, but Tom equates it with exercise. Lydia agrees it is.

When Lydia selects the road for today’s walk, she’ll be sure to tell Tom. She does this when she walks alone. Not that she feels vulnerable or is fearful, but because she promised Alice, her sister. Fear is Alice’s department. She leaves the TV on night and day. Even when she’s not watching it, the machine spits out images and sounds of destruction, natural and manmade disasters, murderers and marauders on the loose.

Lydia has spoken directly to Alice about her penchant for watching and repeating horror stories. “Too much television,” she’s told her. “Too much crazy stuff they call news. Why watch that crap? How can you start every day with it and not have it seep into your mind, into every thought? Like malignant cells, if you give these fears room, they fester.”

Lydia doesn’t want Alice’s fears tagging along on her walk.

She prefers to examine the brook, to watch and listen to the water, to believe she can feel how smooth the stones are beneath the steady current, enhanced by recent rains.

She wishes Tom would come with her. Not for safety, but to help identify a bird whose song she hears but cannot spot among the trees. The most she can do alone is scan the roadside, try to find out where the call is coming from, and catch a glimpse even though the slanted fall sun may make it cast no more than a shadow.

“Old School Road,” Lydia says to Tom, patting his shoulder as she walks by him toward the door. He nods from his recliner, says he’s waiting a bit for the sun to finish drying the leaves. “Enjoy, Lydie,” he adds.

She knows he will close his eyes the minute she leaves, and that that minute may expand to a half hour. But that’s okay, too. They are getting old, have grown old together, and each respects the other’s need to rest when they feel it.

Her sister would not approve of the road that Lydia has chosen. Alice has warned her that less-traveled roads are the least protected places she can walk. “Too few houses,” she says. “You should take a gun.”

Lydia laughs. “A gun? Geez, Alice. When did you become a card-carrying member of the NRA?”

“Don’t be snarky,” Alice replies. “There’s been a prison break. Two guys; armed and dangerous.” Lydia thinks that Alice even sounds like the newscasters forecasting doom.

Alice rambles on as though Lydia asked for more information. “Even if they aren’t in the area now, they may be headed this way from Massachusetts.” She spits out the name with a disgusted sound, as though it is an entire state filled with criminals, robbers, murderers, and insane people who will grab poor, unsuspecting Lydia from a New Hampshire back road, dump her in their trunk, and deposit her dead in some gravel bank or riverbed. They might even dismember her.

Of course, Alice finds enough gruesome violence in the world to justify her fear.

A while ago—though to Alice each story of violent death is always a recent event—the police plucked a torsoless head from the water as it floated and bumped its way down the Merrimack River. Or was it a headless torso? Alice gets a little mixed up with her descriptions. When Alice feels unheard, she brings up this grisly bit of information, which creates a visual that Lydia finds difficult to expel from her mind.

“But I’m old,” Lydia says. “Nobody’s going to bother some old lady out for a stroll.”

At that, Alice says a clipped goodbye.

On Old School Road, the only remaining dirt road in her town, Lydia climbs a small hill then follows the winding lane as it runs along the brook she swam in as a child. Both road and brook meander along the easiest path through the forest.

Lydia can see the tumbling water and listen to its soothing sound. The still verdant smell of plant life between road and brook enchants her. There are ferns and a few late flowers, weeds really, all on the verge of turning to dust like the fallen leaves, which are brilliant this year. Deer flies are blessedly absent, and the sky looks like a child, ignorant of clouds, colored it.

Unlike many of the district’s far-flung schools, her old school was neither torn down or turned into condos and stands shakily about a half mile up the road. Its roof is mostly open to the sky and the clapboards are in rough shape, their paint is history.

Lydia stands in the middle of the narrow road facing the aged school. Like the roof, the front two doors—one meant for boys and the other for girls—have fallen or been bashed in and she remembers climbing the steps leading to the girls’ side so long ago.

She likes places that pulse with memory, and today—since she is alone and not in any hurry—she takes a lengthy pause in front of the building. Here Lydia is easily transported to her past. She may be standing on this dirt road in the 21st century, but she is quite lost in the past. It’s the ’50s. Recess. She is playing games: tag, baseball, dodgeball. She and her young friends are running, leaping, laughing.

It takes her a minute to return to the present when a noise intrudes on her reverie. A car? Odd for Old School Road, which dead ends. Or, to be more exact, turns into a Class 6 road that beavers have dammed up, rendering it impassable even by foot traffic.

No. Not a car. Too loud. Too much chug and chuff. A bad muffler, maybe. A truck, no doubt.

A battered and dirty red Ford pickup emerges around a corner near the school in a cloud of dust. Lydia steps off the road suddenly fearful that they won’t see her and might run over her. But she has nothing to fear there. For they have seen her—two men—the driver braking fast.

Unbidden, her sister’s voice chatters in her head. Escapees? Heading her way? Maybe. No, of course not. How silly to be afraid, to let that voice rule her life the way it rules her sister’s. But here they are, two men slowing way down, giving her a look that she can’t read amid the dust, but they are staring. They drive on, slowly now, and Lydia realizes she’s been holding her breath. She lets it out with a whoosh. She turns and heads back toward the village.

But their disappearance is temporary. There is no place to go. They will turn around and come back to her. If she were on any of the other village roads she could do what they say to do—walk purposefully, as though she has a destination. Or, she could walk up a driveway as though she were visiting. Better yet, as though she were home. But she is on Old School Road and there is nowhere to go. No driveways, no houses, no haven.

She turns and runs toward what is left of the school, darts down the bank and then behind the building to hide. She’s used to walking, but the run depletes her, and her breath comes in deep, heavy gulps. She is afraid. Bent over, hands on her knees, taking ragged breaths, she admits to the fear.

The truck returns—she hears its engine race along the rough roadway. It stops in front of the school. Frantically, Lydia searches the woods behind her. Would it be safer there or just farther from help?

As the doors slam, one after the other, she flattens herself against the back of the building. Never a fan of horror films, she realizes this is her own scary movie. If they find her, what will she do? What will they do? Put a boot against her back, a knife to her throat? Throw her, tied up and bleeding, beneath a smeary window in the extended cab? When they find her somewhere, oh, anywhere . . . how will her sister’s grief mingle with her justification that something bad would happen?

Lydia clings to her old school as if it can save her. She hears them talking, but the words are muffled, her ears incapable of sorting it out. Almost in unison the doors slam, the engine revs, and the truck drives off. Lydia lets her body slide along the school wall to the ground.

When her limbs again belong to her, she rises with the help of the building, hand over hand up the rough boards. Lydia starts back toward the village. The dust has subsided, the woods are still deep and colorful, the brook still plays about the rocks. A swallowtail butterfly zips past her, yellow like the sun. The road is quiet, almost pleasant again. Has the world returned to normal?

She begins to rationalize her experience. “I probably overreacted,” she thinks. “They were just guys in a truck. Perhaps something was wrong with the vehicle.” She thinks of the careless way the men drove. The bumpy road. The sound of the muffler. “Maybe it came loose?” But Lydia is still anxious and takes quick steps on shaky legs.

As she nears her village, her heart rate settles as do her thoughts. Should she tell Tom? She’s not sure, but if she does, she decides to portray it lightly, a bit of a titter, nothing more. She’ll laugh at herself for allowing her sister’s fear to become her own.

She hears it before she rounds the last corner down the hill to the village. The blare, the scale-breaking wail of an ambulance. She begins to run. There’s a stitch in her side, but she must get home. It is now a compulsion. Home!

The sound stops, but not the lights, which pulse their colors against a pensive sky. The ambulance is at her house. The pain in her side threatens to stop her, but she pushes on to the corner and the patch of lawn, her chest heaving, aching, darkness closing in but not before she grasps the tableau in front of her.

Rake and wheelbarrow, a neighbor standing there.

Tom, on the ground.

Two paramedics kneeling and leaning over him.