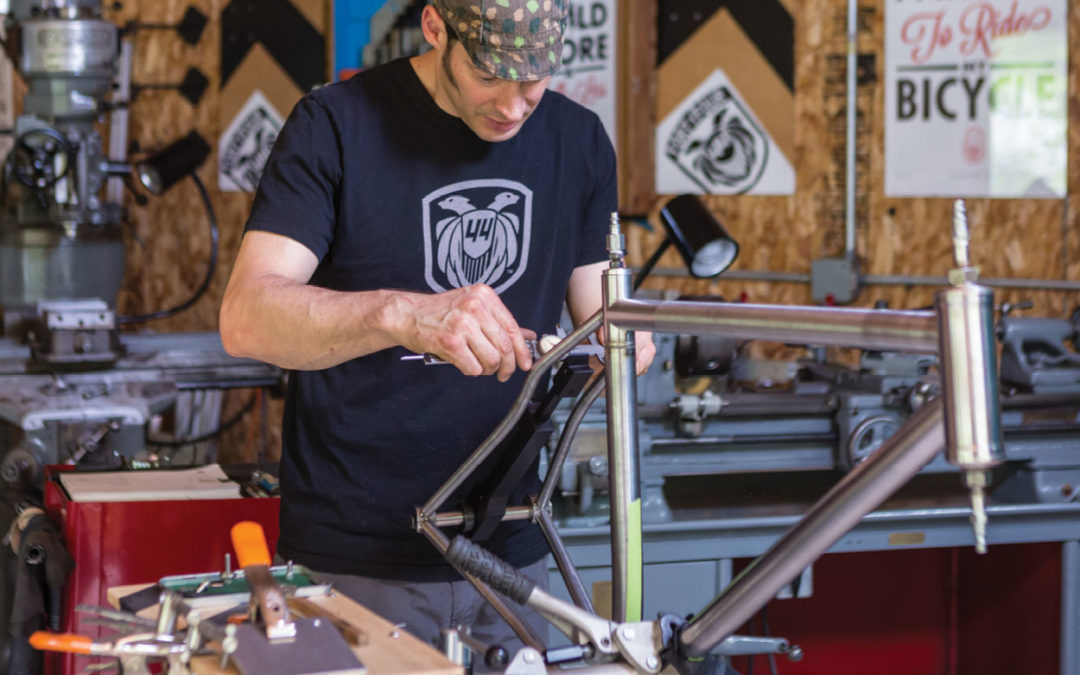 Kristofer Henry’s ideal business client is someone for whom biking plays a significant role in life.
“Someone who’s been riding for 15 or 20 years,” he says. “And has owned 10 or 15 bikes.” He pauses and laughs. “Someone whose ideal number of bikes to own is N plus one: N being the number of bikes currently owned.”
You guessed it. Kris sells bikes. But not just any bikes.

The owner and founder of a company called 44 Bikes based in Lyndeboro, Kris sells custom-built bicycles; generally, bikes whose primary purpose is to ride on dirt. And not just any cyclist seeks out a custom-built bicycle frame. The biking community is small, yet vast. Tight-knit, yet far-reaching. The cyclists that find Kris are like Randy “Shoogs” Larrison of Long Island.
Shoogs, an avid cyclist, met Kris at the Hampshire 100 (now the Crotched Mountain Hundred) where Kris brought tools and a pop-up tent (and of course a few bikes) to support riders at the event. “He handed me a beer,” says Kris. “We talked forever.” And now Shoogs rides 44 Bikes.

“Kris cares about bikes,” says Shoogs. “He cares about the client/builder relationship.” Every 44 Bike comes with purpose, care, and thought. All 44 Bikes are designed, built, tested — and loved — by Kris.

Development of a Bike Builder

Kris got interested in cycling at the ripe old age of four and it wasn’t something he needed to think much about. “I just took off,” he says, adding, “I remember telephone poles.” That is, his parents would allow him to ride or play as far as the nearest telephone pole on his brick-house-lined street in East Greenville, Pennsylvania. As he grew and matured, they would extend the boundary by another pole and then another. “I’ll always remember my first solo bike trip around the block,” he says. “Biking for me has always been a pathway to more elbow room, space, and freedom.”

Family played a central role in the development of his interests and talents. His parents encouraged him to build and draw (“My Trapper Keeper was filled with sketches of bikes,” he says). His maternal grandmother lived locally on former farmland, and there he developed an interest in riding on dirt.

Meanwhile, he never really knew his maternal grandfather, but they shared a bond. “He passed away when I was young,” Kris says. His grandfather was a self-employed TIG welder who kept a meticulous workshop in his garage. At family gatherings, the young Kris inevitably gravitated from the crowd to the workshop where he explored his grandfather’s tools. “My connection to him is through his tools and his workshop and stories from my grandmother,” he says.
As Kris grew, his grandmother and others began to observe characteristics in Kris that he shared with his grandfather. Kris became a TIG welder. He works for himself. He likes to do things a certain way. “He liked things in order,” says Kris, who doesn’t know how people can stand messy workspaces. “A clean shop is a friendly shop.”

Maybe it was with his grandfather in mind that Kris, originally enrolled at Pennsylvania State University as a declared biology major, also signed up for a freshman course in jewelry and light metals. (He eventually earned his degree in the latter.) As an undergrad, he says, “I asked the question ‘Who am I?’” Part of that answer was that he was deeply inquisitive and introspective, and he continued to explore his interests.
He interned with a goldsmith. He learned to TIG weld at a machine shop near campus. In his course research he discovered Peter Skubic, a German jeweler with a scope of skills and practice that went way beyond jewelry. “Many of the artists I studied had mixed backgrounds,” he says.

This led to another discovery: His true field of interest was industrial design. Unfortunately, it wasn’t offered at Penn State. So, he graduated with his undergraduate degree, but 200 (unanswered) cover letters and resumes later, he decided to enroll at Rhode Island School of Design in Providence as an undergrad transfer student. “I needed the redo at RISD to finally get down to honing my skills,” he says of his second bachelor’s degree.

Kris puts great thought into everything he does. He came out of RISD and landed jobs designing shoes at Reebok and then Converse. “RISD was so hands on — sketch, design, refine, build, rebuild, TIG welders — and I went straight to sitting in front of a computer all day,” he says. He decided to quit the corporate life and strike out on his own by starting a graphic design company. The goal of his design firm? To one day be able to build bikes.
This might sound funny: Dive into one career in order to start another. “DIY is strong in my generation,” Kris says, referring to Generation X’s proclivity to do things oneself and on one’s own terms.

Kris didn’t want to be beholden to an investor to get started. He had worked in bike shops, and he didn’t want to work in another. He was trained in welding, design, and metals. Graphic design had a low front-end investment, it was gratifying-enough work, and he had some skills. He wanted to build a business and be his own boss. And at the same time, he wanted to experiment with bike designs on the side.

A side story (although Kris probably considers it a central story!) is that he met his future wife Lynn while at RISD. “We landed in New Hampshire by sheer luck,” he says. Lynn’s twin sister landed a job in New Hampshire. “Did you know that when you marry a twin, you sort of marry both twins?” he asks. Wanting to live near her sister, Lynn and Kris relocated to Lyndeboro to a house on a dirt road with land, a dilapidated horse barn in back, and close proximity to a network of bike trails.
As his design business began to flourish, Kris’ thoughts turned toward bike building. New England is home to some pioneers in the custom frame industry and many of them stem from the same few companies. Fat City dissolved to spawn Merlin Bikes, Independent Fabrication, and others; meanwhile legendary bike builder Richard Sachs served as a mentor and inspiration to many custom builders.

Kris decided to seek out another guru, Ted Wojcik of Plaistow (not far from Lyndeboro), and they worked a trade. “I did some graphic design and rebranding work for him,” Kris explains. “He let me come to his shop on Fridays and ask questions.” Ted, who has been building bikes for over three decades, was generous with advice and tips. He was impressed with Kris’ abilities and finally gave him a final piece of advice: “He told me I really ought to start up my own shop,” Kris says.

At that point, Kris had been building bikes for a few years. He had a name for his shop: The 44 in 44 Bikes comes from the number on his high school football jersey, the same number his father wore playing on the same team at the same school. Now, with all he had learned, he only needed one thing to start a shop. And that was a shop.

He set his sights on a colossal do-it-yourself project: the horse barn in his yard. By himself, he mucked out the barn; added windows, walls, and doors; and started working on 44 Bikes. As he went, he continued building out the shop as he figured out how it should flow.
Richard Sachs once said it takes 100 bikes for a custom builder to truly get a firm grasp on his craft. “Sure enough, at around my 97th bike, light bulbs started going off,” Kris says. “My body and brain had done things enough that they started acting intuitively.” Just as an old high school football coach made him practice football situations over and over (and over and over) to facilitate reacting without thinking, suddenly he found his hands moving instinctually. He had arrived.
These days, Kris gets up and does a couple hours of graphic design work for the small number of longtime clients he’s held on to. Then it’s out to the shop to design, refine, build, and detail.

Although bike building is a solitary activity, Kris involves his clients. “There was so much communication,” says Shoogs, who owns two of Kris’ bikes, a Marauder (“A classic New England hardtail mountain bike,” says Kris) and a Huntsman (“A do-everything road bike”). “There are horror stories about dealing with custom builders. Kris really cares about involving the client and answering all their stupid questions.”

Bottom line: Kris Henry of 44 Bikes cares. He cares about who he is, how he lives, and how he works. The means is as important as the result. “Bike clients are coming to me with genuine interest and a shared passion,” he says. He uses local products and U.S.-manufactured parts whenever possible. “It’s important to give back to your community and ask if we can do it here. I value being proud of your country and origin without being nationalistic.”
Although he didn’t come up through one of the traditional New England custom bike bloodlines, he is proud to be part of the community of New England custom builders. “We have a certain determination and stick-to-it-iveness,” he says. “I want to see things through and do it my way, even if I have to fail the first time through.” Fortunately for Kris, and for passionate cyclists in frames custom built for them, 44 Bikes is sticking to it.