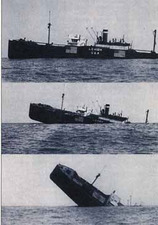 Most Americans consider Pearl Harbor Day as commemorating the start of World War II, but for the U.S. Merchant Marine, the war started long before. On Oct. 9, 1939, a U.S. ship was commandeered in the mid-Atlantic by the German pocket battleship Deutschland.

The unarmed SS City of Flint, clearly marked as neutral, was carrying general cargo from New York to Great Britain when, with the Deutschland’s guns trained on her, she was ordered to stop. The Nazis decided lubricating oil in her holds was “contraband” and put on a “prize crew” which took the ship via a circuitous route to Norway. Norwegian commandos eventually freed the ship and crew. Within two weeks, the United States ordered many ships reflagged to support our allies while skirting neutrality laws.

The first U.S. ship sunk during WWII was the SS City of Rayville which struck a German-laid mine off Australia on Nov. 9, 1940, killing one mariner.

The toll of men and ships continued with attacks on the SS Charles Pratt, Robin Moor, Steel Seafarer, I.C. White, Lehigh, Astral and Sagadahoc. Americans saw dramatic photographs of the Lehigh’s sinking taken by her crew in Life magazine.

On Dec. 7, 1941, the SS Cynthia Olson, chartered to the U.S. Army Transport Service, was torpedoed by a Japanese submarine. Her crew of 33 merchant marines and two Army men went down with the ship.

The SS President Harrison, which just had evacuated a contingent of U.S. Marines from Shanghai, China, to Manila, was ordered by the U.S. Navy to evacuate Marines from Beijing. On Dec. 7, 1941, a Japanese cruiser trapped the President Harrison at the mouth of the Yangtze River below Shanghai. The captain ran the ship aground at full speed. Her crew of 167 was among the first of 604 mariners held as prisoners of war.

The merchant marine suffered its own “Pearl Harbor” at Bari, Italy, on Dec. 2,1943. A German air attack sank 17 Allied merchant ships in the harbor with a loss of more than 1,000 lives. The SS John Harvey, which carried a secret cargo of 100 tons of mustard-gas bombs, was one of five U.S. ships destroyed that day. Many mariners, Navy personnel and civilians died from the effects of poison gas.

During the invasion of Mindoro in the Philippine Islands, more mariners lost their lives than did members of all the other armed services combined. Among them were the entire crews of the Liberty ships SS Lewis L. Dyche and SS John Burke who died when Japanese kamikaze suicide planes vaporized their ammunition-loaded ships.

According to Lt. Gen. Alexander A. Vandegrift, Marine Corps commandant, the merchant marine participated in every landing operation by the U.S. Marine Corps from Guadalcanal to Iwo Jima, suffering the highest casualty rate of any service during World War II, with 1 in 29 killed in action.

Merchant mariners were on the front lines the moment their ships left U.S. ports, subject to attack by submarines, surface raiders, mines, bombers, kamikazes and land-based artillery. At least 8,651 mariners were killed at sea, and an estimated 11,000 were wounded. Of those killed, 84 percent were listed as “missing in action.” About 1,500 ships of various sizes were sunk.

It took 15 tons of supplies to support one soldier for one year at the front. During 1945, the merchant marine delivered 17 million pounds of cargo every hour, including ammunition, airplanes, aviation fuel, amphibious craft, PT boats, explosives, tanks, jeeps, trucks, gasoline, medicines, locomotives and food.

Mariners remained in war zones long after the fighting troops came home to enjoy the benefits of the GI Bill. In September 1946, a mine set by German saboteurs damaged the USAT Edmund B. Alexander. She was one of 48 U.S. ships sunk or damaged by mines after V-J Day.

Mariners delivered the goods when and where needed in every theater of operations and across every ocean in the biggest, most difficult and most dangerous job ever undertaken, according to President Franklin Roosevelt.

Mariners were the first to go and the last to return.