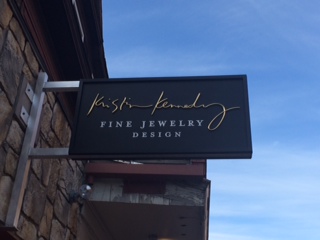 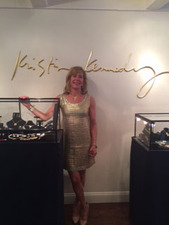 Kristen has been making jewelry her entire life but when she moved here in 2000, she began selling herbrcarefully crafted pieces locally. After a major increase in demand, Ms. Kennedybrmoved out of her basement and opened up shop on Warren Street in Concord tobraccommodate her loyal customers.

Kristen doesn’t make your average run of the mill pieces. Allbrher jewelry is carefully crafted by hand in her workshop and inspired by naturebrand its organic element, as she enjoys the sculpting involved in it’s creation.

All pieces she crafts began as an intricate wax mold that she then fine tunesbrto make them extraordinary and unique. Kristen explained that the South SeabrPearls are particular stones she enjoys working with because of their organicbrshape. The Multicolored sapphires are also intriguing due to the array ofbrcolors they provide. “I love the clashing colors of opals too” she mentionedbrwhile describing all of the beautiful stones she works with.

The time put into each piece is lengthy and depends on thebrspecific design, but can take six to eight hours to complete but she challengesbrherself every season to create new and interesting designs and believes that isbrwhat makes her work special. Her new shop, located at 30A Warren Street, isbropen to all who wish to stop by and talk shop. Just make sure to ask her aboutbrher personalized wedding rings for those couples looking for a truly uniquebrring.

Ms. Kennedy has also been featured in the New HampshirebrChronicle.