Self Made in New Hampshire 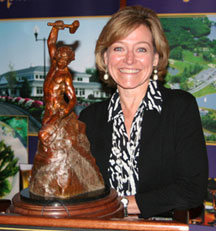 Dr. Deborah A. Osgood of Knowledge Institute in Exeter was named the winner of the first Self Made in New Hampshire award on Thursday, June 16. The celebration gala took place at Brookstone Event Center in Derry.

“The essence of being self made is finding yourself and your purpose in life,” said Osgood, who was nominated for the award by her husband, Dr. William R. Osgood. “If you’re able to find your purpose, you can help make a difference around you.”

Osgood worked her way through all of her post-high school education—bachelor’s,  master’s, and doctorate degrees—while working full time. She created Knowledge Institute to help other small businesses across the country with government and nonprofit business assistance programs. She serves on Gov. John Lynch’s Economic Development Advisory Committee and on the U.S. Small Business Administration Regulatory Fairness Board. She also helped pilot a program where she served as a mentor to businesswomen in Iraq.

“Deborah is an outstanding choice for the inaugural winner of the Self Made in New Hampshire award,” said Eric Brooks, of Brooks Properties, which presented the event, and one of the judges for the award. “She embodies exactly what being ‘self made’ is all about. I am proud that Brooks Properties can honor her with this award, which she so greatly deserves.”

Hatch dedicated her life to better residential facilities for the elderly. At 88, she now lives in the retirement community she spent years of her life trying to make happen. Simoneau overcame personal and family struggles and tragedy to put himself through law school. He now often works pro bono to help victims of domestic violence get restraining orders.

Self Made in New Hampshire is presented by Brooks Properties, sponsored by Pentucket Bank, and produced by LTD Company. For more information, visit SelfMadeInNH.com. Nominations for the 2012 award will be accepted starting in January 2012.