Creature comforts: Michelle Lovely shares a special connection with an assortment of animals 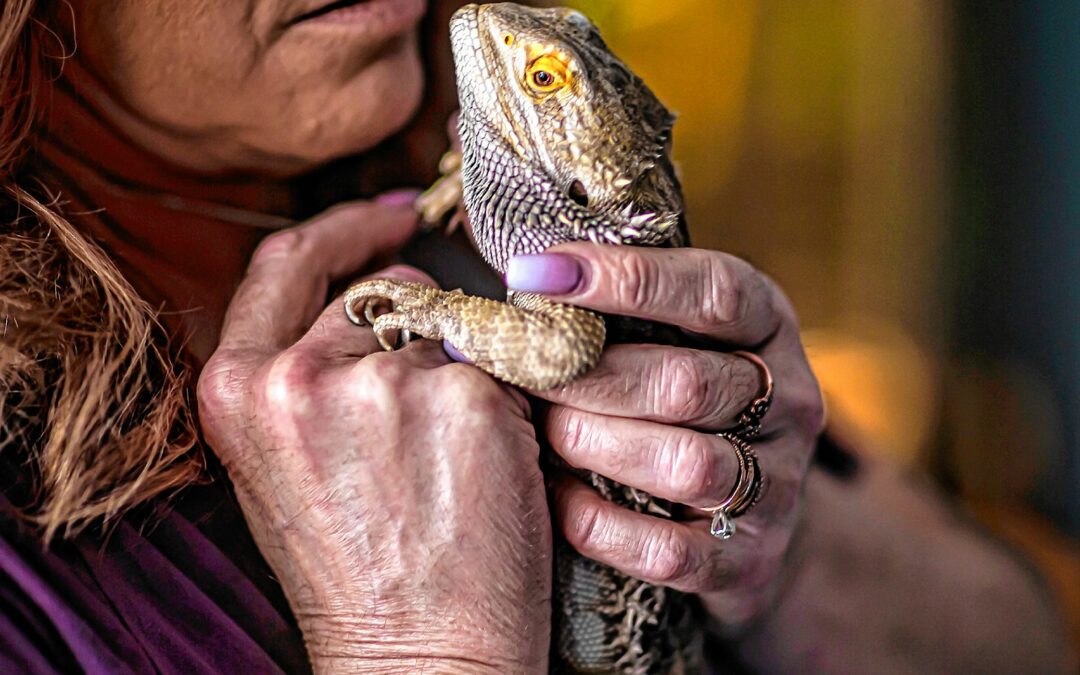 The first thing you notice when entering Michelle Lovely’s home is a bubbling, 75-gallon saltwater tank filled with fish. Then, you’ll see four cats scamper by. Eventually, you’ll be introduced to seven other animals. 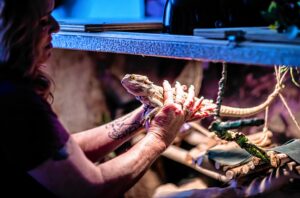 Michelle Lovely holds her Bearded Dragon that she takes everywhere.

The current occupants of Michelle Lovely’s house are as follows: one dog, four cats, one bearded dragon, several fish, four frogs, one gecko, a chameleon, and one 17-year-old boy. Her office, also known as the “reptile room,” houses the gecko, frogs named after characters in “Vampire Diaries,” and a bearded dragon who accompanies Lovely to the store in a baby sling. The kitchen has multiple tanks for fish. The rest of the animals roam free.

Despite her impressive collection of domesticated animals, Lovely is perhaps most well known for her relationship with animals outside the confines of her quaint home in Concord. During the spring and summer, Lovely posts videos of her hand-feeding hummingbirds on her back porch.

Her posts are reminiscent of a Disney movie. The four-inch birds fly right up to Lovely, sit on her finger, and sip sugar water. A Facebook group in which she posts videos of her encounters with wildlife has amassed more than 700 followers of regular watchers. At Petsmart, where Lovely has worked since the pandemic made her home childcare business untenable, she is recognized so often by customers that her supervisors call her their “local celebrity.”

“There will be customers that will come in and say ‘that’s the hummingbird lady,’ ” she said. “I say ‘what gave it away, the big hair?” 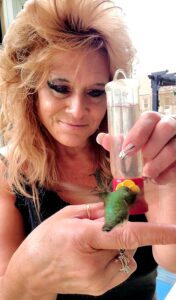 Michelle Lovely with one of her hummingbirds. The current occupants of Michelle Lovelyâs house are as follows: one dog, four cats, one bearded dragon, several fish, four frogs, one gecko, a chameleon, and one 17-year-old boy. Her office, also known as the âreptile room,â houses the gecko, frogs named after characters in Vampire Diaries, and a bearded dragon who accompanies Lovely to the store in a baby sling. The kitchen has multiple tanks for fish. The rest of the animals roam free.

Her fascination with backyard animals started in 2011 when she noticed the tiny birds zipping inches from her face. She brought all of her outdoor flowers inside and decided to test how close the birds would come.

She sits, barely breathing or blinking, while the tiny birds perch on her handmade feeders. During hummingbird season, she’ll feed the birds every day, even if the weather dictates that she stand under an umbrella— hummingbirds actually need more food during rainstorms because they burn more energy flapping wet wings, she explained.

She has also developed a knack for interacting with the chipmunk that hibernates near her house, whom she named Stanley. Lovely spends hours setting up elaborate sets on a vinyl backdrop and lures Stanley in with strategically placed nuts.

In one of the sets, Stanley is atop a toy boat as a news helicopter circles above. In another, he is peaking his head out of a pumpkin while surrounded by fall foliage.

Lovely also figured out a way to get Stanley to interact with the props with expertly laid peanut butter. Photos of Stanley show him playing the saxophone and a harmonica. 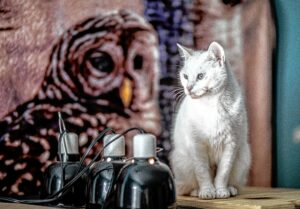 One of Michelle Lovelys four cats under the watchful eye of painted owl in her North State Street home in Concord.

Lovely loves almost all animals (“the only good spider for me is a dead one”) but hummingbirds have a special place in her heart. Quite literally, she has a hummingbird tattooed on the skin right above her heart.

She loves that the delicate and largely unsocial birds would put their trust in a mammal many times their size. She remembered last summer, when a mother bird she named Miss Bella, led her two babies to the feeder Lovely was holding. The babies, with their plumage still growing in, flew up with their tiny feathers coiffed into a Mohawk.

“They really do help with stress,” she said. “I go out and feed my hummingbirds and it’s just like, everything goes away.”

Pour four cups of hot water into a container with two cups of sugar.

Shake the mixture until the sugar has dissolved.

Keep the sugar water refrigerated for 24 hours, then add to a hummingbird feeder.

Extra tips: Avoid using the red-dyed mixtures sold at pet stores. Lovely says red coloring on the ports are enough to attract the birds. Also, regularly check the mixture to ensure it has not grown mold or attracted ants.