For this Concord business, a smooth transition to a new venture 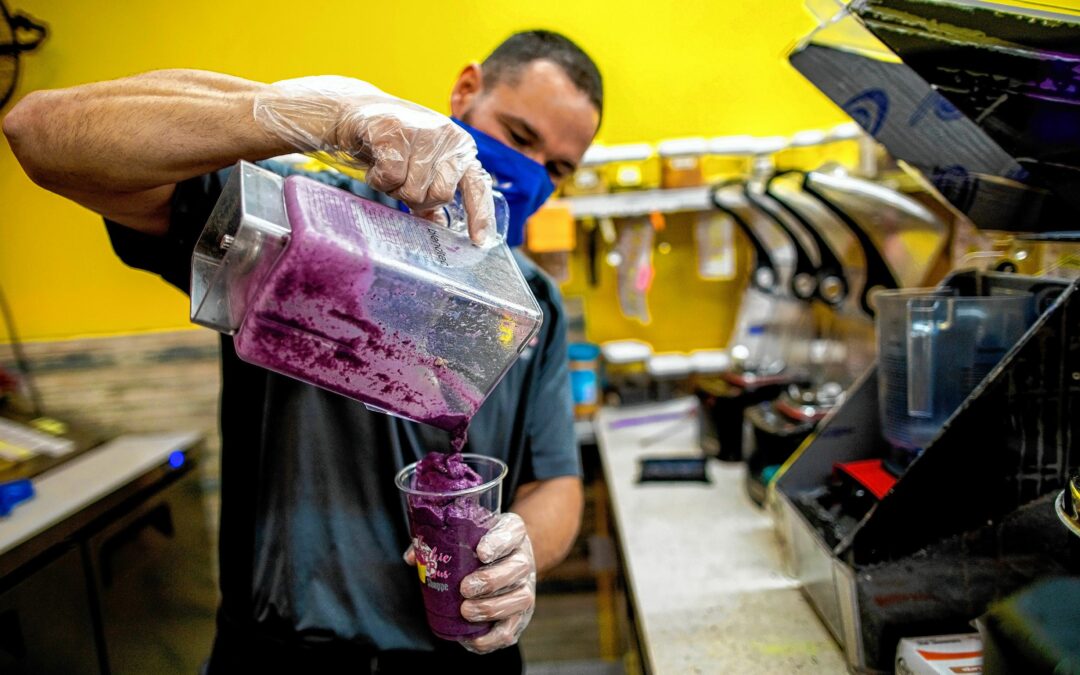 You never know where life will lead.

Sometimes, it takes you into your boss’s office, where your life changes.

Just ask Josh Philbrick. One day, he was in the construction business working for his father, managing subcontractors and crews, maintaining schedules, doing what was part of his family DNA.

And on a subsequent day, at nearly 40 years old, Philbrick was giving his two-week notice and chasing a dream, blending and mixing things like a mad scientist in his laboratory, searching for the right formula in his new and somewhat unrelated career path:

“I was smoothing all the time,” said Philbrick, yet another new local business owner trying to build something during the pandemic. “It’s a great way to open the day, but it was a passing thought.”

Then, it was more.

He’s lived in Pembroke for five years. He opened Smoothie Bus Shoppe in Concord last June, once the COVID-19 quarantine was lifted. He had opened his first shop on Elm Street in Manchester nearly two years ago.

The Smoothie Bus is a real piece to his business model, a seasonal ride, March through October, delivering pre-ordered smoothies in an old ice cream truck that’s gutted, with new floors and a blinding sunshine-yellow paint job. He has two in his fleet, and they surfaced before his storefronts did.

During the pre-coronavirus days of 2018 and ’19, Philbrick gladly recalled long shifts working at Southern New Hampshire University on Commercial Street in Manchester. The bus rolled in each Friday that first season. Philbrick said he sold 250 smoothies there in 2018, then again in ’19. He said sometimes there was a two-hour wait. He also made regular stops at business parking lots, serving a minimum order of five smoothies.

But COVID-19 sort of stopped that program in its tracks. Workers stayed home and quarantined last summer, the peak season for mobile smoothie sales. Lunchtime smoothie bashes dried up, and that took a huge bite from Philbrick’s financial plan.

“We ran one bus this year,” Philbrick said. “It was a lot slower than usual.”

Philbrick says walk-in business is good, quick in, quick out, and in fact he’s hoping to one day expand. Meanwhile, he never saw any of this coming. Not really. Not at first.

But it must have been tucked away somewhere. Philbrick worked for his dad’s construction company in high school, learning about remodeling during summer breaks. He did construction in the Granite State and Florida, where he was a project superintendent for a custom home builder in Tampa.

He studied informational technology and architectural engineering in college, but over-seeing a construction site was his forte. He met his wife, Sonya, in Florida, and she was the one who convinced her husband to think about blending fruity things, not concrete, after the couple settled in Pembroke five years ago.

“She asked, ‘Why don’t we open a smoothie place,’ ” Philbrick said. “That was it. I pondered it for a bit and said sure, why not, and I went online and looked at vehicles and I saw this old ice cream truck out of Pennsylvania and my dad got it and brought it back and we made it into the Smoothie Bus.”

He did the paperwork, satisfied the health inspector, filled in all the blanks to launch his idea. Driving something that looked like it came straight from the 1960s, he took his bus to area car dealerships and introduced his new product. Sales were great. That was on a Friday.

He’s since added a transit bus from Massachusetts to his smoothie magical mystery tour.  He said he missed the construction business, but only to a point.

“Somewhat,” he said. “I enjoy what I do now, though. I don’t miss the schedules, but I miss the work and the guys I worked with. I enjoy working with my hands, but I knew that on-site construction was not the career path I wanted.”

Making smoothies for a line of smoothie lovers means hard work.  “It’s fast-paced,” Philbrick said, “but construction is fast-paced, so it was not a hard transition for me.”

The biggest transition is the smoothie itself. Or how it’s made now, by a professional, not an amateur, and how it tastes now, with its fancy, unending flavors.

“We always made our own smoothies,” Philbrick said. “It was a mix of whatever was in the refrigerator. Bananas, apples, oranges, toss them in and then drink it.”

He’s experimented with different mixtures, searching for the elusive smoothie that brings a July 4 fireworks celebration to your mouth. As well as a smile.

Philbrick’s favorite flavor is peanut butter power. He’s sipped a lot of them, and others, too.

“We created all of these after that first summer,” Philbrick said. “Narrowing it down, we had to figure out which combination would give you the best flavor. We had to taste them to make sure.

“I did not want another smoothie for a while after that. I’d had  enough.” u