QA – Kris Blomback, general manager at Pats Peak Ski Resort in Henniker, facing a season like no other

by Around Concord | In Print, Sports & Rec 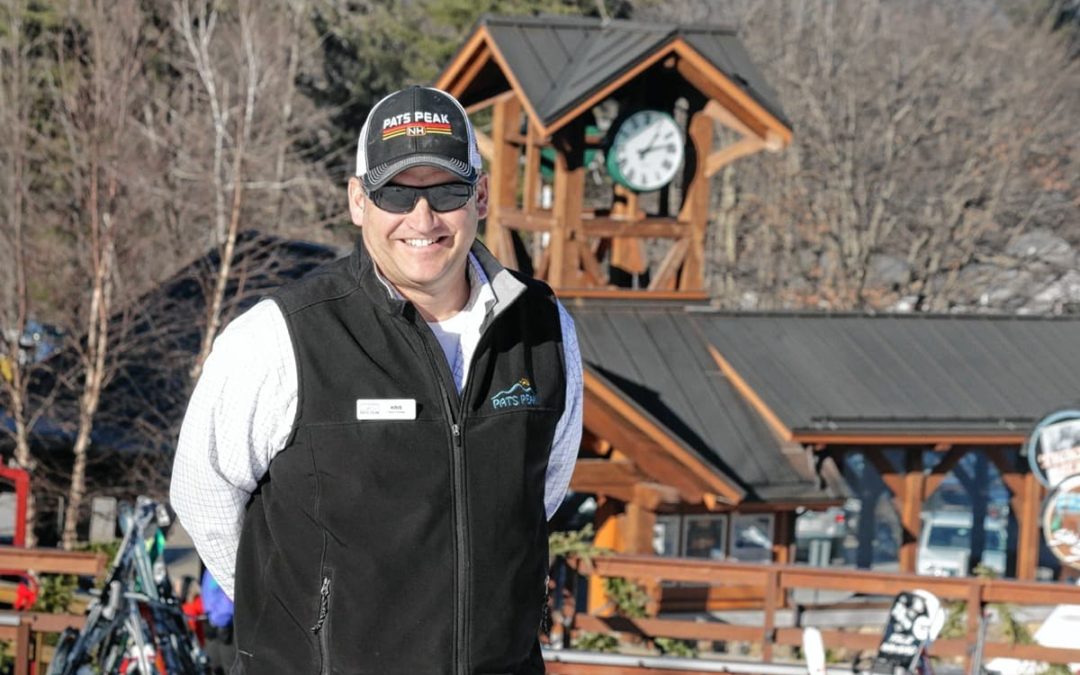 Pats Peak opened for business Jan. 5, 1963, and Kris Blomback has been with them more than half the years since. “We are the longest [-held] and largest continually owned by the same family ski area in all of northern New England,” says Blomback, who lives in “the big city of Henniker” with his wife Jennifer and daughter Halle. John Mattes visited with him as he prepared for the new ski season with its myriad COVID-19 challenges.

John Mattes: I’ve done some research on you, Kris. By my math this September marks 29 years for you at Pats Peak. Is this your dream job?

KB: No, especially with independent ski areas. There aren’t that many of us left out here. The corporate world has scooped up most of them. The family that controls the ski area here has always been about quality, and about putting out the best product every day. I remember a funny anecdotal story from when I was interviewing for the job and I asked them what the snow-making budget was, and they looked at me like I had three heads. They said, “There is no snowmaking budget. If the skiing is poor, you make snow. If the skiing is good, you don’t make snow.” Good old Yankee ingenuity. Sometimes I think we’ve engineered this business to death. Or a lot of businesses. But just good old common sense and frugality in running a first-class operation.

JM: That’s fantastic. Now, what time do you normally start the ski season? Do you think of it as mid-November, beginning of November? And will that be the same this year?

KB: So, anytime after the first or second week in November we’ll start making snow in earnest. A lot of times if it’s real early in the month we’ll let it pile up so that there’s less surface area to melt. Because we are in New England and being 60 miles from the Atlantic Ocean the maritime environment has a significant impact on running a ski area in New England. This has never been for the faint of heart. There were many years at the beginning of Pats Peak when they didn’t open until the first or second week of January because there just wasn’t any snow.

JM: Those years had to be tough. And I hate to jump right into COVID, but I’m going to: What percent of the season was lost to COVID last year in your mind?

KB: The best analogy we can come up with is the ski season last year ended as if we hit a jersey barrier doing 30 MPH. [Laughs] We had 100 percent of our terrain open. The skiing was excellent. We had great crowds. And then we stopped. It had a significant financial impact on us because we were right in the middle of a season pass campaign and the last few weeks of ski season are fairly profitable for us. And then the bleed-over effect was that we had to cancel a number of weddings. We do a tremendous number of weddings in the off-season, and we had to cancel those and refund those as well.

JM: Did any of those weddings re-book? And did they take place either last month or this month?

KB: We’ve done a handful of weddings. We’re abiding by the governor’s order of keeping the social distancing compliance for the number [of people] at weddings that we can hold. So we’ve been doing a number of weddings of under a hundred. We’ve done, I think, about five so far. The nice weather allows the crowds to spill out onto the deck and keeps everybody safely distant. In terms of weddings per se overall, we moved a lot of them to 2021. We did have a few cancellations, which resulted in refunds. But a lot of them rescheduled to later ’20 and next year as well. And we’ve even had a few push out two years.

JM: What sort of measures, in addition to just the regular regulations imposed by the governor, what sort of special things have you done at the resort to accommodate for COVID?

KB: Well, it starts with protection of employees and our staff. We will not be successful in any way shape or form unless our staff feels comfortable coming into our facility every day. So, we have stockpiled tons of personal protective equipment. We have outlined multiple scenarios that we are designing around. So, for instance, here’s a simple thing. And we are going to be outlining this to the public soon. Traditionally, here in New England, you buy a season pass and then you come into the office, you get your picture taken, and then we print out your pass and you go about your skiing. Well there’s a touchpoint in there that you want to engineer out of the situation – walking into an office. So thankfully the technology has come a long way so that these days all our season pass holders can upload their photos. And because it’s only August we have plenty of time to get that pass produced, printed and mailed to them. So that all of a sudden it takes thousands of people right out of our main office and we do it safely. That’s just one example of things we’re doing. We have a number of other protocols. You name any other part of our operation and COVID has touched upon it.

JM: Can you estimate what impact it will have on your restaurant business on a percentage basis?

KB: It’s a little hard to say what that will be doing because we think we’re being about as proactive as we can be. So, for instance, in our restaurant operation we’re installing a to-go window, so that if people want to eat outside they don’t even have to go into our lodge. We are implementing technology in which you can place an order through your smartphone, which prints a receipt to the kitchen, the kitchen prepares it, and it’s ready for pickup at the take-out window, and you have yourself a nice picnic lunch. Or, you could have lunch out in the parking lot. So we’ve really invested very heavily in technology to achieve a lot of these results. Thankfully, our technology partners, our third parties, if you will, are the R&D division of skiing. They’ve spent millions of dollars to implement these technologies so that we can operate as safely as possible.

So to answer the question directly about what it’s going to do, I actually think we’ll do just fine. The sport of skiing is fantastic. You’re outdoors, you’re having a grand old time and you’re socially distant. And if the experience is anything like what happened to mountain biking and biking this past summer, I’d say we’re going to have a great year.

JM: Can you estimate percentage-wise, compared to last year, what your season pass sales will be?

KB: Our season pass sales are right on target of where they need to be. Our guests are very understanding. It’s presented a few different solutions for us. A lot of people have bought season passes because they’re like, hey, you know, we’re gonna be cramped up in a house all winter because of schools. Some schools in session, some schools out of session. So we think we’re going to see a good part of the population playing outdoors.

JM: Let’s hope so. It makes all the sense in the world. It’s a lot like golf because you have your own social distancing built into the activity.

KB: Sure. We’ve got over 300 acres here that you can ski on. We have six chairlifts and four other surface lifts. You’re out in the environment. It’s usually pretty windy. It’s cold. You’re riding in an open chairlift. We have tremendous uphill capacity. We have tremendous downhill capacity. And we’re just taking steps to mitigate bathroom usage and things like that. We’re going to be bringing in some portable, wedding-quality bathrooms, so that if people don’t want to go into the lodge, they could just use these facilities as well. We’re doing a bunch of stuff like that. We’ve watched a lot of other industries and we’re basically stealing the best ideas from all of them.

JM: Has there been any reduction in staff due to the influence of last year?

JM: Do you guys have a slogan, or a credo, that you use inside, looking forward to the season?

KB: I know that a lot of people have a lot of questions about the upcoming ski season. But rest assured our ski area along with every other ski area is developing a plan A, B, C, and D for each possible scenario. So we’re very confident that there will be skiing. It may look a little different, but you’re gonna be out enjoying the slopes whether you’re skiing, cross-country skiing or snow-tubing, you’re going to be out there on the ski slopes. And the ski slopes are working very diligently to provide as safe as possible an opportunity for all those concerned. We’re spending many, many thousands of dollars on every aspect of our operation to make it enjoyable and safe. u