BACK  on the GREEN 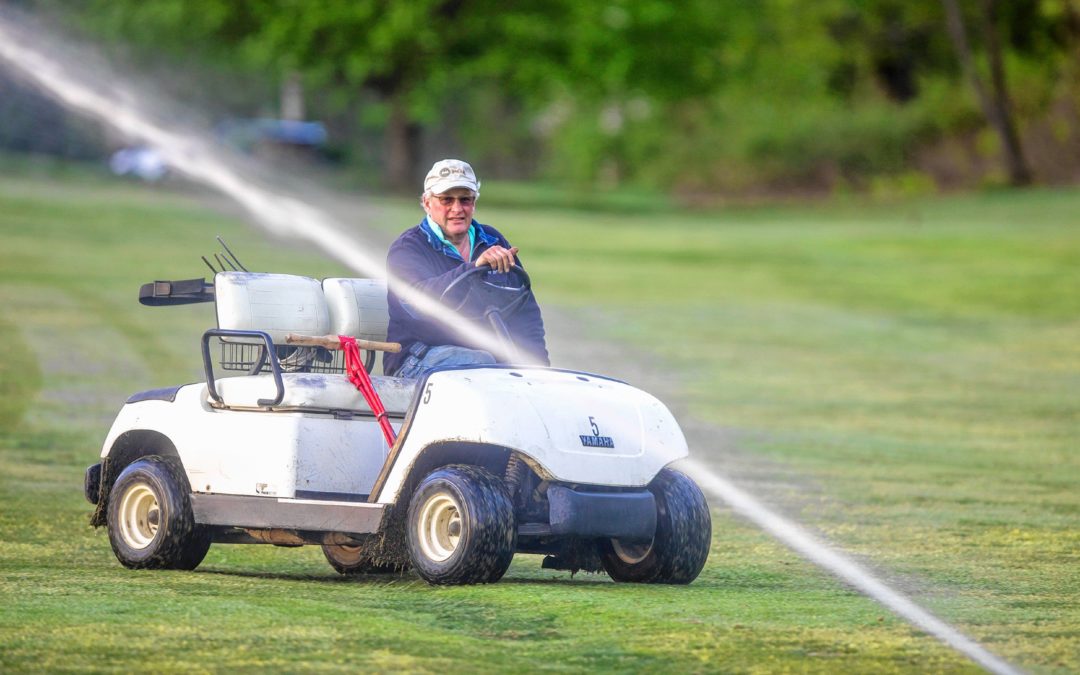 Bob White was born in Vermont in 1955, but that same year his parents, Stan and Ruth, moved to Hopkinton after they bought Duston Country Club from Ruth’s cousin, Artie Duston.

“My first memories are probably being on the putting green,” White said, “and I can remember riding on the tractor that pulled the gang mower, but if you did that now they’d put you in jail.”

His parents offered to sell the country club to White when he was 18, but, “I said no way, I don’t want to be married to that place,” White recalls with a laugh. He soon regretted that decision, and when the opportunity arose to buy the nine-hole course in 1983, White and his brother, David White, put together an offer and got back in the family business.

David left after a couple of years, but Bob and his wife, Maureen, still own and operate Duston, and they still live on the course in the 1812-built brick cape house where Bob and his three siblings were raised.

“We’ve made some great friends running this place for the last 36 years,” Bob said. “We become very fond of our members and our regulars, and that’s one of the best parts about it. … I also tell people I have the best office in the world. I get out there and I get to watch the sunrise. It’s very peaceful out there most of the time.”

It was certainly peaceful back in the 1920s when Artie Duston bought the property. It was 120 acres of farm back then, but when the only golf course in Hopkinton closed, Duston saw a business opportunity.

“He realized there was some potential, so he built the course in the ’20s using horses and a borrowed steam bulldozer. I think that’s what it was called,” White said. “I’ve got a picture of it and it looked pretty archaic.”

Duston also built clay tennis courts on the site as well as a restaurant, The Tea Room, that attracted non-golfing travelers because, at the time, the property was at the intersection of Routes 202 and 127 (the roads were later moved). The tennis courts didn’t last long, but The Tea Room was still operating when Stan and Ruth White bought the course from Duston in 1955.

Bob said he started working on the course when he was 12 or 13 – raking sand traps, mowing the grass, watering and helping his dad with any other manual labor that needed to get done. Duston lived just up the street, so he still helped out when he could, and Ruth White took care of the books and the kids – Bob and Dave and their sisters Carrie and Judy, who also helped out around the golf course.

After Bob decided against buying the country club, he kept working outside, taking care of maintenance and landscaping at Elm Brook and Clough State Parks and multiple local cemeteries. His parents sold the country club in 1976, and in 1983 his father found out the new owners were looking to sell it themselves.

“I had been kicking myself for turning it down back then, so when the opportunity came to buy it, I jumped at it,” White said.

He and Maureen began updating the country club when they took it over in 1983, building new tee boxes, sprucing up the buildings and upgrading the irrigation system. Their three children – Jared, Nathan and Bethany – all worked on the course as kids, just like their father. Once they were all off to college, Maureen began a career as a nurse, but she never stopped working at the golf course.

“She comes home now and she usually gets right to work on the books,” Bob said of Maureen. “She deals with a lot of other things, too, besides the books, like purchasing and lining up the help, so she really has a full load.”

Duston, like all golf courses in the state, country and world, faced extra challenges this spring due to the coronavirus. The course, like every one in New Hampshire, was closed until May 11. The Whites were able to survive the loss of April revenue because they have owned the country club for so long, but they were still concerned about their financial situation because so many of their bills are due in the spring, and they were unsure when they might be able to open until Gov. Chris Sununu announced the opening date on May 1.

They had to install a service window, but other than that, White said getting the course up to code for the new coronavirus guidelines that were also announced on May 1 was not difficult. And he and Maureen feel like the guidelines will keep everyone safe, as long as they are followed.

“Most people have been good about following the rules and staying six feet apart,” White said. “Sometimes they forget and get too close, but then you see them back right away. We did have one group who wanted to sit on our patio and have some beers and we told them we’re not doing that right now and they got a little upset, but we’ll get through that.”

Nothing is imminent, but the Whites are thinking about selling. They’ve offered it to their children, but it looks like Duston Country Club may leave the family again.

“They’re smarter than we were,” Bob said with a chuckle. “They decided they like the solitude of not owning this place.” u