by Around Concord | Arts, In Print 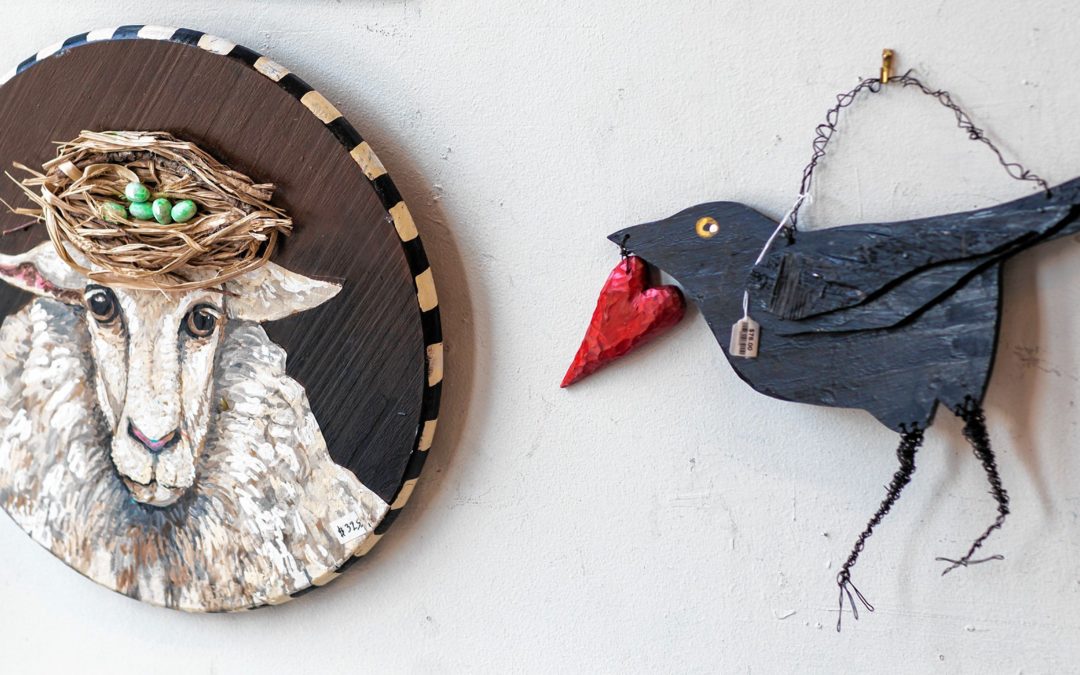 Story and Photos By DANA WORMALD

Jim Lambert’s folk art is whimsical. His entrance into the League of New Hampshire Craftsmen Gallery in downtown Concord on the first truly spring-like day of the year is anything but.

The Hillsborough artist, 73, is awkwardly carrying an armload of new pieces – old wood made colorful and timeless – that would soon be set out for sale. And he has to use the bathroom. Both are perfectly legitimate reasons to hurry past a waiting party of three with a curt nod instead of the near-universal hello-with-a-smile.

After a few minutes he emerges from the back of the store, and hellos are exchanged again followed by some re-introductions. Still no smile. Minutes later, on a sunny sidewalk that feels much warmer than the reported 50 degrees, he sits in a folding chair and earnestly answers questions for nearly an hour about his work and the many people who collect it. He doesn’t smile – and even his chuckles are delivered deadpan.

To be clear, there’s nothing wrong with any of that; stoicism is a New England pastime. It’s odd only because Lambert’s work, from notion to creation, is utterly playful. The old lady wearing a fox-head stole and holding a “Wash Your Hands” sign, the mermaid in a fishbowl, the hopping bunny adorned with yellow flowers – these are pieces that even while thought-provoking are instantly, joyfully recognizable. They are made to catch eyes – and smiles.

But most of what you’ve just read about Jim Lambert and his work is wrong, as he himself will tell you. Sometimes our perceptions of art, and the artist, are exactly backward.

“I’m not that serious of a person,” Lambert said, “but I see my work as being very serious.”

On both counts, he’s right. There is warmth and humor in his stolid demeanor and mastery in his art, which stays true to traditional folk art in its execution and use of scrap materials. The proof is hanging on the walls of the gallery at 36 Main Street, where only “the best of the best” who have “met the League’s rigorous standards of creativity, innovation and technical expertise” are given space. It is a welcoming room of wall-to-wall treasure.

Janine Lep, the gregarious manager of the gallery, is an artist too – a painter and jewelry maker mainly but not only. “I art,” she says, the noun-to-verb transformation serving as her favorite way of describing people for whom the act of creating isn’t so much a hobby as how they live.

While the League’s headquarters, located at the other end of downtown on South Main, feels like a museum (and a beautiful museum at that), Lep’s gallery on North Main is more of a bewitching middle space between creation and exhibition. Thomas Weston’s wooden spoons are on display in both spaces, for example, but only at the gallery do you fully feel the utility underlying the artistry. At headquarters, the spoons are gentrified, stripped of their spoon-ness and recast as objects longing to be encased and protected from all manner of stews and slurries.

That’s not to say the gallery is a place for gift-shop knickknacks. The items on display are produced by people at the peak of their craft. But unlike at a museum, the experience here is more tactile than contemplative. Visitors are meant to pick up Weston’s spoons, to flip through Rick Stockwell’s photographs, to touch the silky pottery of Evan Williams and Grace Pejouhy. They are meant to fall in love with an object and take it home forever.

Many gallery visitors over the decade or so that Lambert’s work has been on display there have done just that, and sometimes those pieces reach unexpected heights. One of Lambert’s popular suns was purchased in Littleton and found its way to the CBS This Morning show; other pieces are now part of former president Bill Clinton’s private folk art collection.

Concord developer Steve Duprey is among the local collectors of Lambert’s work, a growing demographic that seems to be a source of constant amazement for the artist.

“This woman (went) into this very animated conversation about where she has the sun in her kitchen, and that every morning when she comes downstairs she’ll see the sun and how much it means to her,” Lambert said. “. . . It’s almost like the woman had a religious experience.”

“I just stand there in awe and I’m going, my God, it was just plywood and paint.”

Lambert knows it’s more than that. He knows that art at this level is infinitely more than the materials used. What he doesn’t know, what no artist can ever truly know, is how meaningful a piece might become to someone else. And he’s grateful.

“I’m still amazed at how people react to my work.”

There is no smile on his face as he says this, but it spreads wide in his voice. And it’s there in the downtown gallery, embedded in the grain of every piece he creates. u