by Eric Pinder | In Print 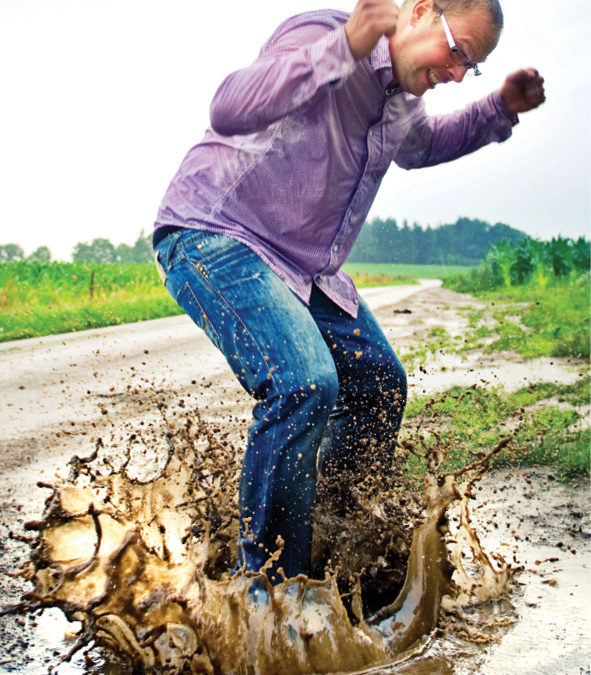 It’s too bad I don’t have a lab coat, a monocle, or cartoonish Einstein hair because I began class on Tuesday morning with a mysterious experiment. One student tells me, “You’re like a mad scientist running tests on us.”

Without telling them why, I lead a dozen college students like the Pied Piper down the hall, past the school’s office assistant, who blinks at us in surprise, and out into the cool spring air. A slate-gray sky arcs overhead. Puddles dot the parking lot.

Such outdoor excursions normally raise no eyebrows in a class called Literary Landscapes, but when I steer everyone toward the library instead of the trail, the students start to murmur. Something strange is up. Usually our feet have left the pavement by now.

I pick a good spot at the edge of the parking lot and hold up a hand. “Does anyone have the urge to do something?” I ask. “Right here, right now?”

“Yes!” declares dark-haired Danni. He grins and reaches down into the snowbank beside the last parked car. His friend Heather, bundled up in a jacket and hat, hops back in alarm. “Don’t you throw that snowball!”

Danni’s grin widens. He cocks his elbow like a pitcher, and Heather flinches, but it’s a balk. He tosses the snowball into the puddle at my feet instead. The water is so shallow the impact barely splashes.

“Any other urges?” I ask. The puddle, not the snowbank, is what I’d hoped they’d notice. They stare at me as if I’m crazy. Time for a hint. “If you were five,” I say, “what would you want to do right now?” Heather gestures toward the puddle. “I’d jump in that. But not now, because I’d have to wear wet clothes for six hours.”

Two other students do stomp on the snow mound to clean the spring mud off their shoes, but that’s stomping for a utilitarian purpose rather than for fun, so it doesn’t count. No one indulges in a good puddle stomp. Not even me. Hence my experiment: At what age do puddles cease to attract us? I want to find out.

Younger kids know what to do with a good puddle. Not long ago, in the rainy autumn, two four-year-olds walking home from preschool in a nearby town stopped and splashed so long in a big puddle that their slurping, squishing boots were soon filled to the brims. “We had to take their boots off and pour them out,” one mom told me, “and then they wanted their boots back on so they could go jump in the puddle again.” Okay, that’s two data points collected.

So far, my experiment has provided evidence that the allure of puddles disappears sometime after age four and before age 19, the age of the youngest test subject in my non-puddle-jumping class. When a puddle no longer attracts your feet like a magnet, is that the moment you officially grow up? I wonder. Further research is required. National Science Foundation, please send more funding. And, well, rain.

Since not one of my college-age and up test subjects care to get their feet wet on this cold spring day, it’s time to stop asking when we lose the impulse to puddle jump and start asking why.

“Why is this fun when we’re kids?” I ask the class.

“Because we’re dumb,” Amber says, folding her arms. “Or maybe when we’re letting our parents dress us, it doesn’t matter. But now we’re old and have to dress ourselves.”

Next to her, Stephanie smiles and adds, “I recently realized the best part of driving in this weather is you can drive on the side of the road through the big puddles.”

Ah, perhaps that’s the answer. We do still love to play in puddles all our lives; we just hate doing laundry. So, we’ve traded our galoshes for cars.

Sounds like a workable hypothesis to me. Next rainstorm I’ll force myself to stomp in a big puddle and see if it makes me feel like a kid again. If not, I’ll know my theory about puddles is, well, all wet.