A Parent’s Final Act of Love 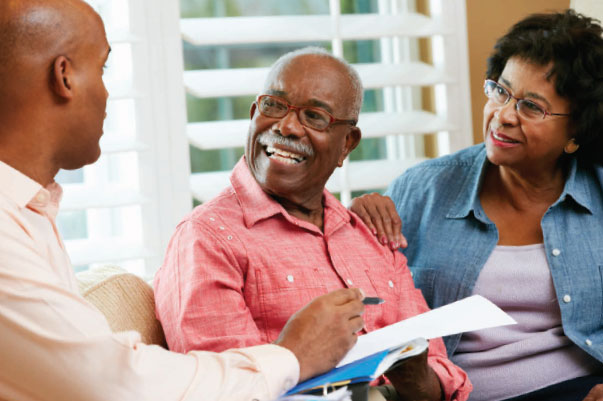 Jane Concordian was an organized woman. She paid her bills on time. She maintained her tax records in a properly labeled ﬁle cabinet, and she balanced her checkbook every month. As Jane got older, she began to recognize her own mortality, so she did the responsible thing and signed a Last Will and Testament, leaving all her assets to her three be-loved daughters.

Hers were modest assets, consisting of a home on Pleas-ant Street, two bank accounts, and an IRA she had saved over the years. Jane was tech savvy and frugal, so she downloaded a simple will from a reliable online source and signed it at her local bank. The tellers were happy to serve as witnesses, and they put Jane at ease by joking about how she was going to outlive them all. Years later, Jane’s health declined. Her eldest daughter, Anne, lived close by and was willing to help. She visited her mother every day and helped with shopping, appointments, and the checkbook. Jane’s two other daughters lived in Flor-ida and couldn’t visit as much as they would have liked.

When Jane passed away, her daughters sat down together to put their mother’s affairs in order. They knew their mother had signed a will years ago, so they expected everything would be simple. Unfortunately, that was not the case. Jane’s daughters soon learned a difﬁcult lesson about estate planning.

The two bank accounts went to Anne, to the exclusion of her siblings. The probate process tied up the house for a year and a half before the family could sell it to pay bills. Much to everyone’s surprise, the IRA went to Jane’s brother rather than her children. What remained was distributed among the sisters, who no longer speak to one another. What went wrong?

A WILL IS NOT AN ESTATE PLAN

Estate planning is the preparation of legal documents to ensure that a trusted person can manage your assets and your health care in the event of your death or incapac-ity. Most estate plans include a Durable Power of Attorney, an Advance Directive for Health Care, a Last Will and Testament, and a Revocable Trust.

The proper designation of beneﬁciaries under retirement plans and insurance is also important. All these documents need to work together. Sound estate planning includes having a professional review your ﬁnancial and family situation to make recommendations about how to structure things. Jane’s ﬁrst mistake was thinking that the will would be sufﬁcient and that she didn’t need the help of a professional.

THE RISK OF JOINT OWNERSHIP

It is possible to own an asset as joint ten-ants with rights of survivorship with another person. In that arrangement, when one owner dies, the survivor becomes the sole owner. This works well for married couples but often creates problems—sometimes painful and difﬁcult to resolve—for parents and children.

Jane made the mistake of titling her bank accounts so that she owned them jointly with Anne. This allowed Anne to write checks for Jane during her lifetime. How-ever, Anne also became the sole owner of the accounts after Jane’s death, effectively thwarting the language in Anne’s will stating that all assets should go to her daughters equally.

Anne could have shared the bank ac-counts with her sisters but opted not to because she felt the estate should compensate her for the work she did for her mother while her siblings were in Florida. This is a common scenario for families in which one sibling bears most of the burden of caring for a parent. Using a Durable Power of Attorney or a Revocable Trust could have avoided this situation.

THE IMPORTANCE OF BENEFICIARY DESIGNATIONS

Certain assets (such as IRAs and life insurance) pass automatically to the designated beneﬁciary when the owner dies. Too often, people name a beneﬁciary when they ﬁrst create the account and then forget to update it. In Jane’s case, she named her brother as the beneﬁciary of her IRA years ago when her children were small. Her mistake was failing to review the beneﬁciary designation and thinking that her will would cover things such as this.

When a person dies owning assets titled in his or her own name (like Jane’s house), may have to be sold to pay bills of the estate if there are insufﬁcient funds to do so. If Jane’s bank accounts had been available to the estate (i.e., not jointly owned with Anne), the house might not have had to be sold. If Jane had understood the lengthy probate process that her daughters would face, she might have explored the use of a Revocable Trust instead.

THE SELECTION OF AN EXECUTOR

An executor is an individual named in a will to handle the probate process. In Jane’s case, she made the mistake of nam-ing all three of her daughters to serve as coexecutors. Many parents believe this is a fair thing to do. However, the difﬁculty with coexecutors is that reasonable minds can disagree. Jane’s daughters had differ-ent ideas about which real estate agent to hire and what the sale price of the house should be. These kinds of decisions can weigh heavily on siblings, and disagreements often result in hurt feelings and even litigation. Choosing one person to serve as executor is generally more efﬁcient and promotes family harmony.

Estate planning is rarely as simple as we would like it to be. Even for an individual like Jane Concordian with modest assets and a desire to treat her children equally, there is work to be done. The best course of action is to seek the assistance of a professional to ensure that your wishes will be carried out properly.