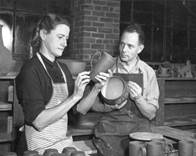 The creative partnership of Mary & Edwin Scheier transformed the world of pottery, evolving studio pottery from everyday craft to fine art. The Portsmouth Historical Society/Discover Portsmouth is celebrating the Scheier’s work in an exhibition running April 30 to October 2 at the Academy Gallery on 10 Middle Street in downtown Portsmouth, NH. In an adjacent gallery will also be a retrospective exhibition of fine art and craft made by other artists and craftspeople of that time: members of the New Hampshire Art Association and League of NH Craftsmen. There will be a VIP reception for both exhibitions on April 30 at 4:30 pm and a general public reception to follow at 5:30 pm. The exhibition is open seven days a week from 10 am to 5 pm.

The Scheirs: A Creative Partnership

Edwin (1911-2008) and Mary (1908-2007) Scheier were struggling Depression-era artists in Virginia. Essentially self-taught, they made functional pottery and small sculptures out of local clays that they found and dug themselves. David Campbell, the director of the League of NH Craftsmen (1938-42 and 1945-62), learned about the Scheiers and convinced them to move to New Hampshire. Campbell found Ed a teaching position in the arts department at the University of New Hampshire (UNH). From 1940 to 1960, Ed taught and Mary served as an artist-in- residence, sometimes creating up to 200 pieces a day.

The couple became celebrated, winning national craft awards year after year, and seeing their work collected by major museums. They were part of the post war, modernist experimental movement, which pushed the limits of utility and art and stressed the benefit of the hand made. For close to 25 years, they lived, worked, and taught in New Hampshire and were active members of the League of NH Craftsmen and the New Hampshire Art Association. They generated an impressive body of work, contributing to the state’s rich craft heritage. Mary did most of the throwing, producing utilitarian, thin-walled, and elegant vessels with simple, luminescent glazes. Ed’s emphasis was on creating sculptural vessels with imaginative surface decoration, such as imagery of fertility goddesses or creation stories.

In 1968, Ed and Mary retired from pottery and lived in Oaxaca, Mexico. Ten years later, they moved to Green Valley, Arizona, where Ed returned to the potter’s wheel to produce some of his greatest works. In 2003, the Scheiers were designated Lotte Jacobi Living Treasures at the New Hampshire Governors Arts Awards, and in 2009, they received the League of NH Craftsmen’s prestigious Lifetime Achievement Award.

The Edwin & Mary Scheier:  Mid-Century Modern NH Artists exhibition includes examples of Scheier art from 10 institutions and private collections. The focus is on the mid-century years, from the late 1930s to the late 1960s, when Mary and Ed worked in New Hampshire, as well as their later work from Mexico and Arizona. Pieces will be set in the context of mid-century modern décor.

As a complement to the Scheier exhibition, the NHAA and LNHC retrospective exhibition features the work of many of the Scheier’s contemporaries. More than 100 paintings, prints, and pieces of fine craft made by artists and craftspeople from the 1930s to the 1970s are on display. This exhibition runs fromApril 30 to September 28. Several major pieces in this exhibition are on loan from the League of New Hampshire Craftsmen’s Permanent Collection. Both organizations were formed during the Depression era with state support to help artists and craftspeople make a living making fine art and craft. The League is 83 years old and the NHAA is celebrating its 75th anniversary this year.

About the Portsmouth Historical Society

The Portsmouth Historical Society is a nonprofit organization that operates a museum and visitor center in downtown Portsmouth, publishes books, manages the Black Heritage Trail and advocates for historic preservation. We tell Portsmouth stories and our mission is to provide a central city location where, in cooperation with other groups, we can introduce, interpret, and stimulate the study of Portsmouth history. For more information, visit portsmouthhistory.org or call 603-436-8433.

The League of NH Craftsmen is a non-profit, craft education organization. Its mission is to encourage, nurture and promote the creation, use and preservation of fine contemporary and traditional craft through the inspiration and education of artists and the broader community. The League represents the signature of excellence in fine craft, through the work of its juried members, and its rigorous standards for self-expression, vision, and quality craftsmanship. The

About the NH Art Association

New Hampshire Art Association is a non-profit professional art association founded in 1940. It consists of over 450 members of painters, photographers, watercolorists, printmakers, and other fine artists living and working primarily in New Hampshire, Massachusetts, Maine, and Vermont. The Association engages visual artists and the public at large through a passionate and energetic agenda of artist support and exhibitions, community outreach and education. These programs nurture creative expression and stimulate dialogue, thereby enriching contemporary culture and community spirit. The New Hampshire Art Association is one of the oldest statewide art associations in the country.

For more information about the Edwin & Mary Scheier and the NHAA/LNHC Retrospective exhibitions, call 603-436-8433 or visit portsmouthhistory.org.