Brooms and stones: The art of curling finds traction in Plymouth 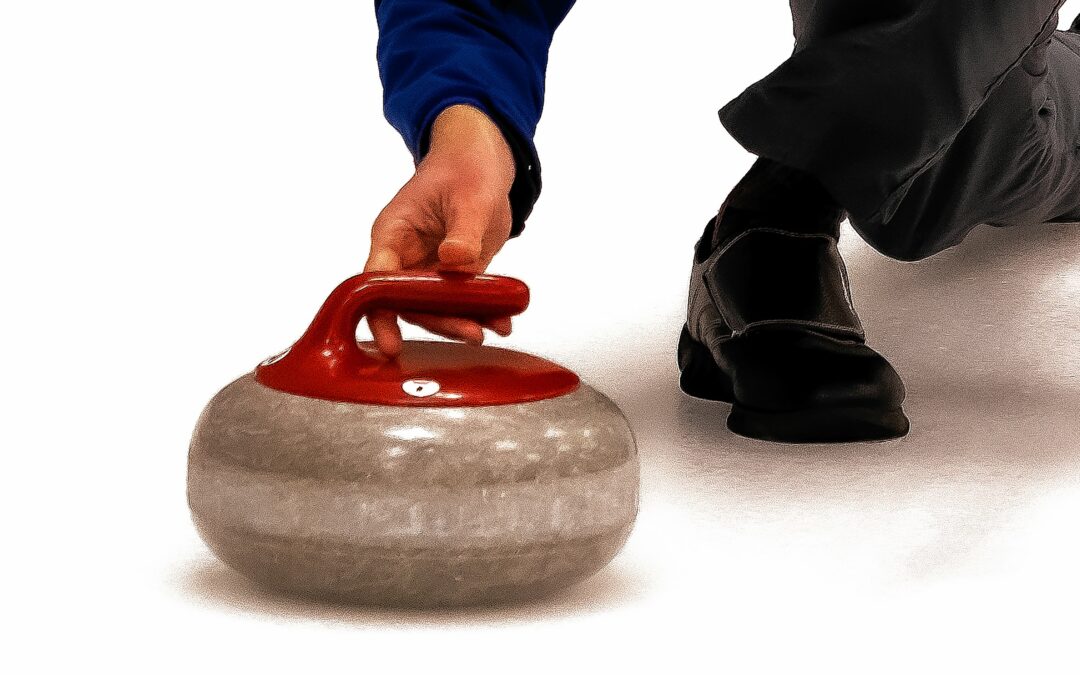 It’s early October, one of the prime times of the year for sports fans: football season is underway, the MLB postseason is about to begin and basketball and hockey seasons are on the horizon. But at the ice rink at Plymouth State University, 32 men and women, ranging in age from their 20s to their 60s slide across the ice lightly tossing stones, ferociously sweeping the frozen surface and loudly calling out directions.

Chris Strahler pushes a stone during a curling match at Plymouth State University this past October.

For seven weeks from late-August through mid-October, Plymouth State University hosts its curling league – prior experience not required.
It all started back in 2014. Dave Gyger, the arena manager, wanted to find something that would fill what they call the “shoulder seasons” – the fall and spring when the ice isn’t needed for hockey. He’d first been introduced to curling in the late ’90s.

“It was the most fun I’d ever had on the ice,” he said. “I said if I ever got into another rink that we had available ice to do this, I would love to start it.”

Gyger began working at Plymouth State in 2012; two years in, he decided to try to follow through on that goal. Public interest in curling had spiked during the 2014 Olympics in Sochi, Russia, even though neither the men’s nor women’s U.S. curling teams fared well.

“I went to my supervisor, and I said, ‘I’d like to start this program.’ At the time, she supported it, and the university bought the equipment, and we put it out there,” Gyger said. “Our very first Learn to Curl, we had over 250 people come through the door, so it was an immediate success. It was amazing.”

Brendon Hoch, a Plymouth resident, was one of the early newcomers.

“They bought stones for the arena. I’d seen it in the Olympics and thought, ‘Hey, I’ll try it and see how it goes,’” he said. “And I’ve been doing it ever since.”

Gyger still holds free Learn to Curl sessions twice a year as a way of introducing people to the sport. Those events have helped build up the league’s popularity to where it is now.

Linda Levy, from Holderness, also started curling at Plymouth State when the rink opened for curling eight years ago. Now, she’ll be teaching her first curling sessions this coming spring.

“We’re all pretty novice-ish when you compare us to the Olympians,” she said. “But you catch on pretty quickly if you’re willing to pay attention to the minute details.” 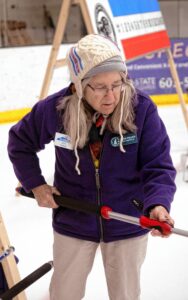 Chris Pollack gets her equipment ready for the curling match at Plymouth State University.

Contrary to other rinks that are used exclusively for curling, Gyger and his team have the unique challenge of maintaining the ice for hockey and skating as well. That requires some additional maintenance.

Scott Shedd, the rink’s assistant manager, said for hockey, they’ll usually just smooth out the ice with the Zamboni. For curling, they’ll start prepping the ice at 4:30 for a 6 a.m. curling session. That includes using the Zamboni, but also dry cutting the ice (scraping the ice without water) and making sure each of the four lanes used for matches have even surfaces.

After, they’ll roll the 42-pound stones onto the ice. Made of granite only found at two locations in the world – Ailsa Craig, a Scottish island, and Trefor, a village on the coast of Wales – it’s not the kind of granite you’d make your kitchen countertops out of. It’s a non-porous granite, meaning it won’t absorb water and won’t shatter into pieces when it makes contact with other stones.

According to Gyger, if the stones are cared for properly, they can last anywhere from 30 to 50 years. So once Plymouth State bought them, they were committed to running the program for the long haul.

Gyger and Shedd store the stones in a bin connected to the ice rink so they’re kept cold at all times; if they become too warm, they’d melt the carefully-manicured ice. They also provide the players brooms and grippers to help the curlers maintain their balance on the ice because they don’t wear skates.

The Plymouth curling league is unique because usually, Gyger said, people form a club first, and then they’ll find an arena to rent for sessions. In this case, the Plymouth State ice arena already has the equipment and organizes the matches for people to come curl.

The rink has become so well-regarded that the Grand National Curling Club – the largest curling organization in the United States – has hosted three arena championships at Plymouth.

“I think that just kind of confirms that we are able to put out a good product, as far as an ice arena surface to curl on,” Gyger said. “We hosted it back in June, and we had teams from Atlanta, New Jersey, Massachusetts, Vermont – all the New England states – the Carolinas. So people have heard that we have a good product and want to come up and curl with us. Pretty humbling to know that we’re doing such a great job.”

During matches, curlers navigate across the ice, some bundled up like they’re outside in mid-January, while others dress more lightly. The ice itself is kept at 18 to 21℉, while the rink is a balmy 45 to 55℉.
Kevin Hilbrunner stands out most noticeably, wearing a Hawaiian shirt over long sleeves. He started curling in 2020 at a Learn to Curl right before the COVID-19 pandemic. Even though things subsequently shut down, he’d gotten enough of a taste to know he loved the sport.

“[I] just watched all kinds of videos and stuff during the pandemic and got hooked even more, understood the strategy more,” he said.

As a veteran with disabilities, Hilbrunner said he particularly appreciates the accessibility of the sport.

“The nice thing with curling is it’s a fully adaptable type of sport, and it’s inclusive, so that’s the one positive thing I like,” he said. “It’s a very positive sport. Everyone shakes their hand in the beginning and in the end. It’s very sportsmanlike.”

‘Curling’s not a real sport, Dad!’ 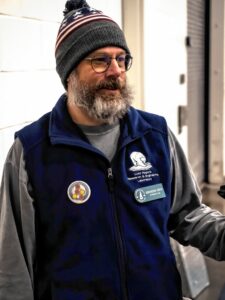 Brendon Hoch, a Plymouth resident, was one of the early newcomers to the rink at Plymouth State University to begin the curling games.

Gyger continues to work to build and expand the program (non-Olympic years tend to see lighter interest). One area of focus has been encouraging Plymouth State students to participate. This includes an eight-week class that the university offers to help students fulfill their physical education requirement.

The hope is that they’ll want to join the wider array of curlers from around the state who come to Plymouth’s ice rink every week because they just love to curl.

“My family teases me a lot because they’re like, ‘Curling’s not a real sport, Dad,’” Hoch, the Plymouth resident, said. “And I tell them: It’s an Olympic sport.”