Mall memories: Kristy and JB Frazier worked at the mall, met at the mall and, eventually, fell in love at the mall

by By Ray Duckler | Family, History, In Print 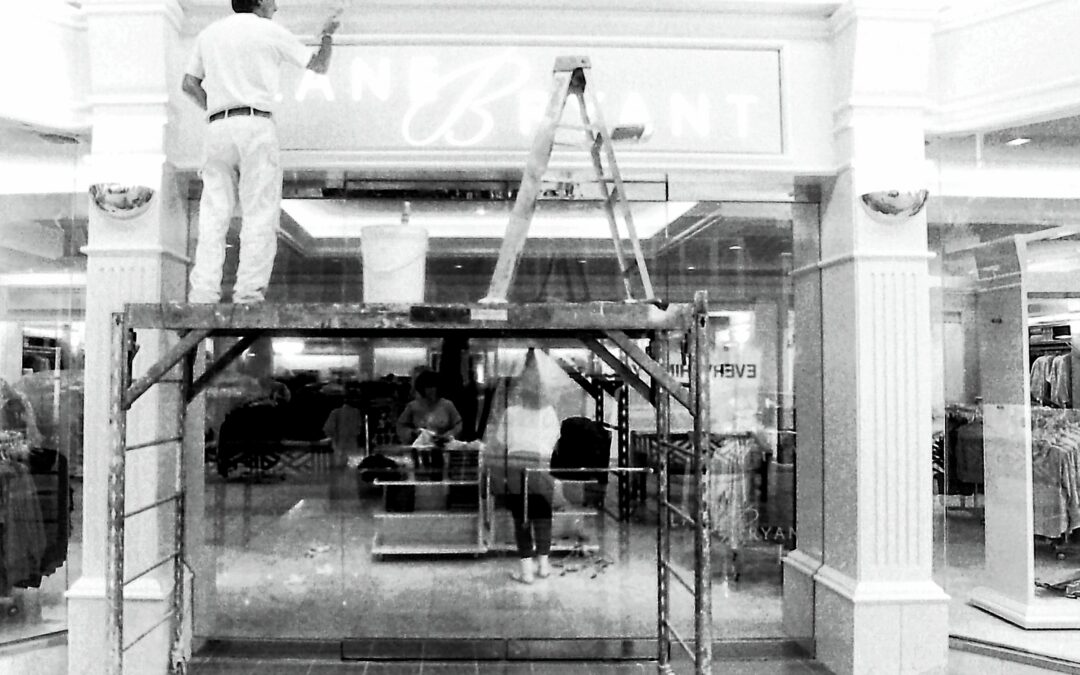 When Steeplegate Mall opened in 1990, it held the promise of being a center of Concord life for decades to come. As the mall winds down, we asked readers to share their memories. Here’s one about how Kristy and JB Frazier worked at the mall, met at the mall and, eventually, fell in love at the mall.

The guy working at Foot Locker thought he had a noisy neighbor.

It had to be the girl next door, his future wife, working at Claire’s Boutique 23 years ago. She had to be the one pounding on his wall, knocking sneaker displays to the ground.

It only made sense. Kristy Daneault was working that shift when the sneakers fell. The two businesses shared a common wall. This was a no brainer.

Who else could it be?

“He thought we were the ones who were banging on the walls,” Kristy said by phone recently. “I told him we have jewelry on pegs on our wall, so I could not be the one who was pounding on the wall. I explained it to him aggressively. Not mean, but I aggressively told him that I wasn’t the one doing it.”

By that time, however, it hardly mattered what Kristy said. JB Frazier was hooked on her, and the Steeplegate Mall, a big hit in the community through the 1990s, had once again provided a service, beyond selling jewelry and athletic footwear.

In this case, at that moment in 1998, JB liked what he saw. And heard. “Somehow, he was smitten by my sass,” Kristy wrote in an email to the Concord Monitor, which publishes this magazine.

Asked how sassy she was, Kristy said in a text, “Enough that I didn’t think it would intrigue him enough to come back.”

She was wrong. While they worked side-by-side, in two separate businesses, JB flirted with Kristy at the Steeplegate Mall over the next week. Kristy responded. Their first date was five days following that mysterious wall-shaking incident, still, to this day, an unsolved mystery.

“He hung out over the next couple of days,” Kristy said. “I had known some of his friends at the mall, but we never laid eyes on each other until that moment. When he asked me out, I figured I’d give it a try.”

There was complexity, though. “I was a child of divorce,” Kristy mentioned, “so I was skeptical and trust was an issue.”

Still, on their first date they went to a place called Chantilly’s – long since closed – on Fort Eddy Road to shoot pool.

“We were just looking for something to do,” Kristy said.

From there, Kristy hit a crossroads in life, the summer after she graduated from Pembroke Academy in 1998: pursue an education, or solidify what she had with JB.

College became her priority. She was going to Rhode Island in the fall, to Johnson and Wales University in Providence.

JB was staying here, in Henniker, working at Foot Locker. “I didn’t make a commitment because I was leaving,” Kristy explained.

Something, however, changed inside her. She realized that there was no need to settle on one path over the other.

Go to college in Rhode Island, she figured, then finish school here, in the Granite State, at New Hampshire Technical Institute and at what was then called Plymouth State College (It’s now Plymouth State University).

And why not continue seeing JB, too?

So that’s what she did.

“I chose to kick it up a notch,” Kristy said. “I said we should be boyfriend and girlfriend. That was the end of July and we spent the whole month of August together. He came to Rhode Island almost every weekend.”

They made the long-distance relationship work. They dated for seven years before marrying in 2005. She’s an education and site manager for Head Start in Franklin. He works for Comcast.

Meanwhile, the mall stores they met at went the way of the T-Rex, dead, extinct, whatever you want to call it. The contrast between the 1990s Steeplegate and today’s is startling.

Parents liked it. They shopped for stuff they needed while their children, the younger ones, raced down the mall’s central wing, flat and long like an airstrip. Or maybe mom or dad joined them for a ride on a soft, motorized elephant.

Teens, or course, felt cool at the mall back then. Actually, pre-teens did as well. They went to Spencer’s, played games in the arcade, ate pizza.

“We grew up going to the mall, and that was what you did,” Kristy remembered. “Shop at all the stores, and and it was so full back then. At the time, it was the place to be.”

Today, she’d never think of dropping off her two daughters at the Steeplegate Mall. “It’s desolate,” Kristy said. “There’s nothing there.”

Her younger daughter recently thought Manchester’s mall was busy and exciting. And it was. It was a shopping center, a restaurant, an amusement park and a meeting spot, all rolled into one.

Sure. Have a slice, or an ice cream cone, or some sweet-and-sour chicken. That’s what it was in the day.

And sometimes, while parents and kids immersed themselves in the mall experience, something else, something special, occurred from time to time, when the world wasn’t watching.

Like the wall between a pair of businesses mysteriously shaking. Hard enough to knock sneakers to the ground.

“I decided to follow him after that,” Kristy said, “and that was the best decision I ever made.”