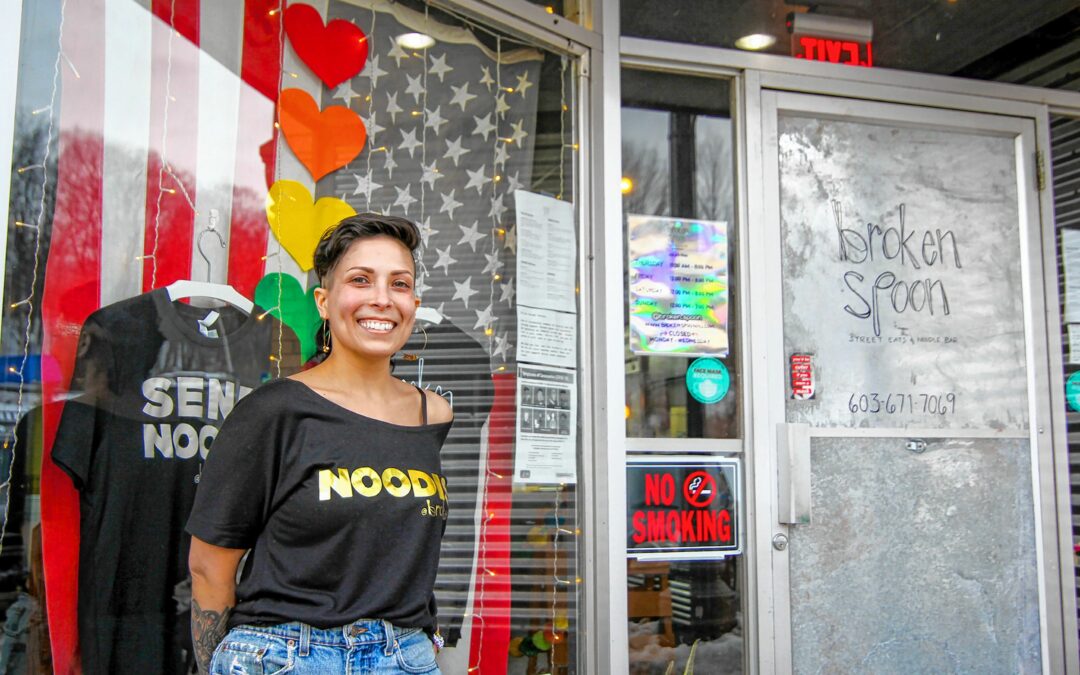 While most of us were hunkered down at home, Miriam Kovacs decided to take a leap of faith and open her dream business, the Broken Spoon in Franklin. The restaurant was born from Kovacs’ Hungarian, Jewish and Sri Lankan roots, which have inspired all of the flavors on the menu, with categories like “Chilled Noodz,” “Steamed Buns (Bao)” and “Skewers.”

“Opening a restaurant is always difficult,” according to Kovacs, who just had to “pull the trigger” despite the economic uncertainty during the pandemic. “If I had opened in February of last year, I’d say this would have been a lot scarier. I just kind of figure it’s something I’ve been working for. And it’s always a chance, it’s always a gamble so I’m just gonna jump right in.”

Kovacs credits her landlord, Jason Grevior, for being instrumental in getting started. His family owns Grevior Furniture in downtown Franklin and he owns the building that houses Broken Spoon.

“He was pivotal in my ability (to) turn my dreams into reality. I had looked at other locations and the pricing was more ‘future of Franklin’ pricing, versus recognizing a young experienced entrepreneur and giving me a space with affordable rent. He not only provided me with an opportunity but he also put Franklin first by providing fair rent,” Kovacs said.

Kovacs said she believes that she wouldn’t have been able to open her restaurant as quickly if she had to open with a dine-in experience. Much of the restaurant is complete, but she still needs tables, a dishwasher and utensils. “When you don’t have deep pockets, it’s very time consuming,” Kovacs said, “So, on that hand COVID has been a little bit of a blessing. And I think also people are tired of the same thing because we’ve been in quarantine for 11 months now. So even just having something new and taking a drive to it I think is a little bit of a blessing as well. I wish I could give everyone a dine-in experience but I guess that kind of just makes it more exciting when that time comes. In the meantime, it has been pretty fun just meeting customers and talking on the phone with them for a couple minutes while taking their order. It’s been nice.”

She really fell in love with noodle bowls when she lived in Philadelphia. When she worked long, grueling hours for little pay as a line cook at Italian restaurant Osteria, she found her love of noodle bowls from living in South Philadelphia next to the Vietnamese area.

After that she moved back to New Jersey, but they didn’t really have any noodle places where she lived in Asbury Park. Kovacs said it was a trendy area so noodles would have fit right in, but without investors it was difficult to build a business from the ground up.

“But that’s where I started,” she said. “I started doing noodle pop ups and working with breweries and doing dinners and things like that. And then I met my husband and ended up moving to New Hampshire, which is good because I really like the community here.”

She said she feels the community in New Hampshire is much more supportive than Asbury Park was and a little less competitive.

Kovacs grew up with a lot of fusion food. Her father is from Hungary, and her mother is from Sri Lanka. She also has three siblings. “So I kind of grew up with fusion food because my mom had to learn so much to feed all of us,” Kovacs explained. “I would go to my aunt’s house and get to eat, you know, what she was cooking. We’re a very food-centric family. So, you know, Sri Lankan cuisine is very unique. My uncle says it’s like a cross between Thai and Malaysian.”

Kovacs’ favorite item on her menu is the “Boca Bun,” a steamed bun made with pork belly, sesame slaw, sliced apple and something she likes to call “sassy mayo,” which is her take on spicy mayo. The Boca Bun is her favorite because it’s named after her dog that passed away. But it’s also her favorite because of the flavors.

In all of her cooking, she puts an emphasis on making healthy broth and tries to source all of her food as locally and humanely as possible, while also maintaining lower prices. She used to work at cancer treatment centers and tried to show patients the healing properties of broth. Kovacs said she aims to support other small businesses around her while providing healthier food to her customers.

“I do believe that what we eat is basically at the root of a lot of our issues in society,” Kovacs said, “I wouldn’t categorize myself as health food so much as food for sustained living.”

As far as healthy food goes, Kovacs said “it’s tough when every meal has like a large wad of noodles in it,” But everything is available to be Keto-diet friendly. She has rice noodles available and tries to use high quality noodles overall. She also uses chicken thighs, marinated with coconut and turmeric so everything has more herbs and spices on it.

She is working on including lettuce wrap options for those who are gluten free or want to eat something a bit more balanced. She said for some diners, a ramen bowl that includes bao can be too much food. So adding an option to swap out the bao for a lettuce wrap would allow “the best of both worlds.”

The inspiration for the name of her restaurant was a mix of her upbringing and her time in culinary school at the Culinary Institute of America. Growing up, she had male cousins who would misbehave and her aunts would playfully smack them with a wooden spoon. They used the same spoons to put all of their love and heart into what they were cooking for dinner. When Kovacs went to culinary school she had a mentor who didn’t allow the students to use rubber spatulas. Kovacs explained that the teacher “insisted everyone use the wooden spoons. It’s an organic material and it transmits energy, versus a synthetic, manmade plastic spatula. So, kind of those two experiences clicked and with a giant bowl, like a hearty bowl of noodles, I just thought the broken spoon was fitting, you know, trying to lift it. It’s just hardiness.”

Kovacs described her up and down relationship with food as a child. While in kindergarten, a teacher told her parents that she needed to lose 5 pounds. This started a messy relationship with food and her body image. She has always loved food, and now she wants to provide people with good food that will help foster healthy relationships with what they put in their bodies. “I like to make everything that I have as healthy as possible with flavor that doesn’t come from fat or oil. You know, it’s like a rich culinary experience without all of that heaviness, so you can enjoy it and not feel terrible,” Kovacs said.

Some of the places that she sources her food from includes Double Jay Farm and Krebs Farm, both in Sanborton; Sunflower Natural Foods in Laconia, Dole & Bailey in Woburn, Mass., and she is working on starting an account with PT Farm, a beef and hog farm in North Haverhill. She sources from these places partly because they are local to the New England area, but she is also mindful that they are all reasonably priced. That allows her to keep prices low for her customers.

Growing up, her family had a ski house in Southern Vermont, so New England was no stranger to her. She lived in Southern Vermont after culinary school and worked at The Inn at Sawmill Farm. She said “it was nice coming up to New Hampshire. It’s just nice to be around legitimate agriculture and closer to the land.”

When she lived in New Jersey, she felt disappointed with seeing tourists come and trash the beaches every weekend. She feels that people in New Hampshire tend to respect the land more.

Her dream for the future is to grow her business and expand and create a bit of a chain, where the menu would be the same in different locations but chefs could create their own specials. She explained that the culinary industry can be brutal.

“It’s hard. It hurts. You work long hours,. You don’t get paid much. It becomes very uninspiring. So I wanted to build this down the line as a restaurant for chefs.” The chefs would run the kitchen and have a standardized routine, but they could also run specials. Kovacs continued, “So there’s still the creative aspect and everything else is kind of already taken care of for them.” She also wants to make sure her workers will have health insurance and an emotionally and mentally safe environment to work in. u