Keeping up the Spirits 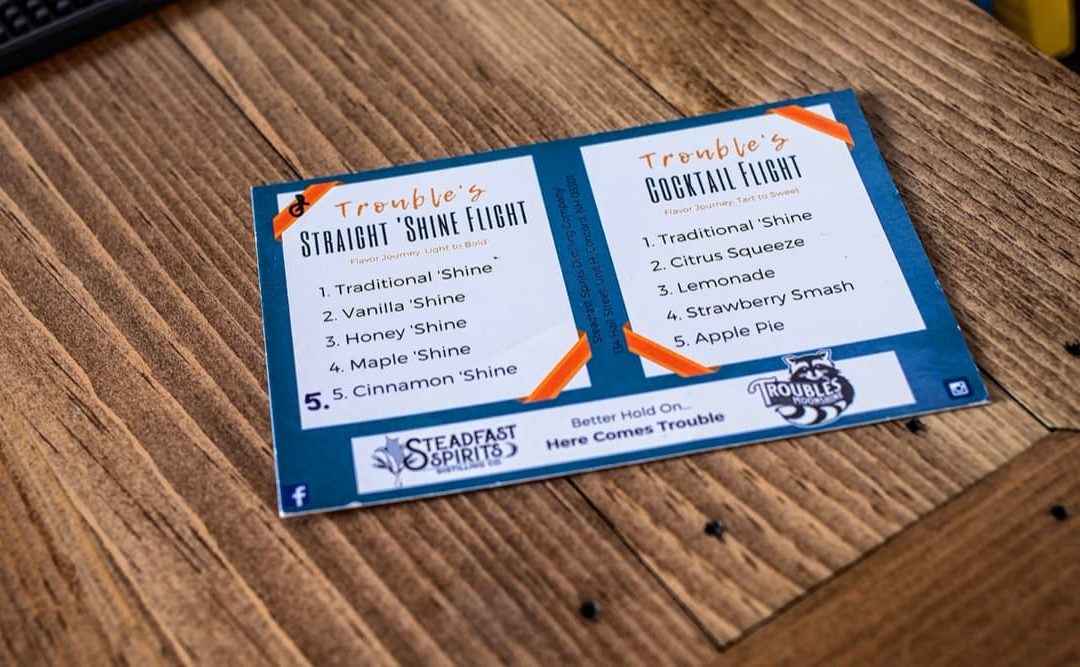 When CJ Lundergan signed a lease on an old Office Depot warehouse two years ago, planning to turn the space into a distillery, he hadn’t included a provision for a global pandemic in his business plan.

Lundergan opened Steadfast Spirits Distillery in Concord this year at the end of January, a month and a half before COVID-19 brought the world to a halt. When Gov. Chris Sununu announced the state’s stay-at-home order on March 27, Lundergan had one major thought: “What the hell do we do?”

Fortunately, Lundergan thrives in situations of uncertainty. As a full-time fireman in the town of Windham, his firehouse schedule allowed him to work on developing Steadfast Spirits during his time off. Lundergan had dreamed of opening his own distillery since his teenage years and starting his own business in a new industry didn’t intimidate him, but getting Steadfast Spirits up and running still proved challenging.

Steadfast Spirits is one of only a handful of craft distilleries in the state and the only one in Concord proper. After developing a business plan with the help of his wife, Lori, a former adjunct instructor at UNH’s business school, Lundergan began turning the warehouse into what it is today.

Lundergan picked up industrial tables, rolling carts, and storage containers that now fill the distillery, which now includes countertops taken out of houses about to be torn down, showing both his ingenuity and his style.

“That’s something I’m proud of, because we spent every dollar that we had to do this. We had to find a way to do it.”

Lundergan’s scrappy mentality may be his business’s greatest asset. Although he never could have planned for a pandemic to upend his business’s first few months, resourcefulness and creativity have allowed him to adapt.

The distilling process Steadfast Spirits uses produces excess alcohol that is perfectly safe, but isn’t up to Lundergan’s exacting standards. “I don’t want to call it a byproduct, because most distillers would use it,” he says. “I just didn’t personally like the flavor in my product, so I didn’t use it for product.”

As a fireman, Lundergan regularly interacts with various police and fire departments, as well as hospital and emergency workers. He recognized an opportunity to do some good while promoting his business by handing out small bottles of hand sanitizer made from the excess alcohol to first responders he met on the job. When COVID-19 began to hit, he knew it was the right thing to do.

Lundergan was waiting for small bottles and labels to arrive when he pulled in to the parking lot one morning and was greeted by a line of people waiting for free hand sanitizer. Lundergan had mentioned to a friend who also works in the distillery business that he was planning to make sanitizer, which inadvertently led to a misleading mention in a news article that Steadfast would be giving away hand sanitizer to the public for free.

The bottles and labels wouldn’t arrive for another two weeks, so Lundergan told the line of people that they could come back later that day for free sanitizer – if they brought their own containers. He scrambled the rest of the morning to get the sanitizer ready for distribution and spent the afternoon filling baby food jars and old milk cartons with the freshly made first batch of Steadfast Spirits hand sanitizer.

Eventually, the bottles and labels arrived, and since then, Lundergan has given a free four-ounce bottle to anyone who stops by the distillery. Steadfast Spirits is also supplying fire and police departments across the state, as well as several state agencies, with sanitizer, selling it to them for only the cost of production. Lundergan estimates he’s given out over 5,000 individual bottles and dozens of bulk containers.

“It’s not our job here to give everybody’s employees free hand sanitizer, but I’m also not doing it to make money,” he says. “I’ve always been proud to say I don’t have to make a million dollars on it. If it benefits everybody, then let’s do it.”

Although Lundergan has been using his own excess alcohol as the base of the sanitizer, the project – and its costs – have rapidly ballooned. As the pandemic slowed supply chains around the world to a crawl, the other ingredients needed for the sanitizer became increasingly hard to come by. Glycerin, which is combined with the alcohol to produce sanitizer, proved to be both hard to come by and expensive. Lundergan paid $600 for his first drum, but by the time he needed to purchase a second, the price had more than doubled to over $1,500.

Lundergan also quickly surpassed his own capacity to produce the ethanol needed to make sanitizer. The Steadfast distillery setup isn’t designed to produce alcohol with a high enough proof to be used for sanitizer in such large quantities, so Lundergan has been supplementing what he is able to make by purchasing alcohol as well. “I can’t make it fast enough,” he said. “None of us can.”

Greg Meeh, founder and owner of Cold Garden Spirits in Canterbury, has felt similar pressure since the pandemic forced the closure of his distillery in March. Meeh, who only sells his products at the distillery itself, was shut down completely for three months, but lifted restrictions have since allowed him to resume outdoor tastings.

Meeh is currently making sanitizer out of what should be used to make bourbon. Pivoting to making hand sanitizer was easier for Meeh than other distillers, thanks to a supply of glycerin left over from Meeh’s work as a special effects designer. Cold Garden has donated sanitizer to Concord Hospital, as well as homeless shelters in the Concord area. “The homeless population is really a vulnerable one, so we’re just trying to chip in and do our part,” Meeh says.

Plymouth State University, which welcomed students back to campus in late August called Meeh to ask if he could supply sanitizer. He initially supplied 100 gallons, and they drove to Canterbury to pick up 50 or 60 more gallons before the school year started. Meeh has also hosted “bring your own container” events, giving away sanitizer to the public as he is able to, although it’s been hard to keep up with demand at times.

He resupplies Concord Hospital whenever they’re running low, and Plymouth State wants enough sanitizer to make it through the whole semester. Meeh has also had to supplement his ethanol production with commercial-grade materials, which has forced him to raise prices.

Despite the difficulties of the past few months, Meeh is hoping that the fall leaf season, normally his busiest time of year, will provide a boost to Cold Garden. Lundergan, on the other hand, is still trying to spread the word about Steadfast Spirits.

COVID-19 has made it difficult for Lundergan to expand his business’s reach – some bars are closed, restaurants have reduced capacities, and licensing products for distribution in other states is time-consuming and expensive. It’s even hard to tell whether sales have been good or bad – the numbers are simply too unpredictable. Fortunately, Steadfast’s numbers through the end of May were impressive enough for the New Hampshire Liquor Commission to begin stocking two Steadfast Spirits products in 20 stores around the state.

As Lundergan attempts to plan for his business’s post-COVID future, he expects the sanitizer to remain part of the Steadfast Spirits lineup. Whatever business benefits may come from the increased visibility the bottles provide, Lundergan feels compelled to continue to pay it forward. “I don’t want people to think that this was a sales pitch – it wasn’t,” he says. “It was just the right thing to do.” u