Competitors for decades, the Stephens boys are on the same team

by Ray Duckler | In Print 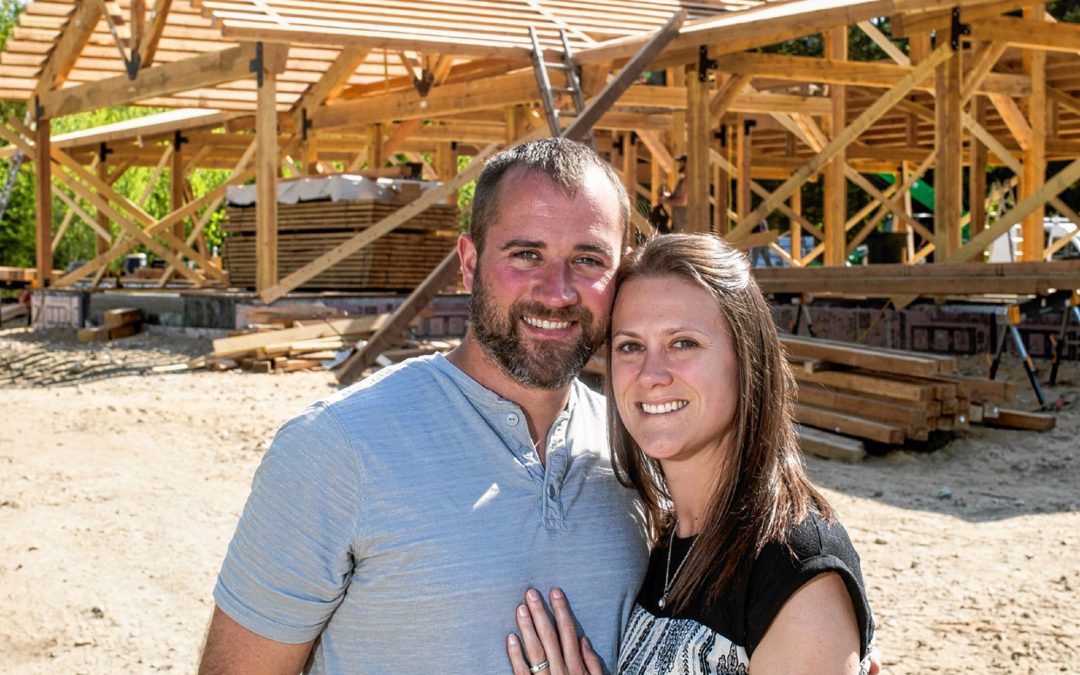 The sibling rivalry, once fierce, has calmed down since the old days in Epping.

Now, instead of beating each other’s brains out in pickup TiddlyWinks, Eric and Justin Stephens are depending on their DNA alliance, now that it’s mature and seasoned.

Their wedding venue, The Barn at Bull Meadow, on Bog Road in Concord, opens this fall, and the brothers, along with Justin’s wife, Jennifer, know team chemistry will be pivotal if they’re to succeed.

“As far as Justin and I competing with one another, it was your standard healthy sibling rivalry, and either because of or perhaps in spite of that, we actually work incredibly well together,” Eric said by email. “Justin is more of the organized, eternally optimistic one, and I tend to be more concerned with contingency plans and reacting to the unexpected.”

The rivalry was expected. You didn’t need a high IQ to predict a pair of brothers, both jocks, might jockey for position in life, on the courts and fields across the sports landscape.

Now, here’s the key ingredient, the fuel to the fire, the spice that gives this sibling rivalry a bit more oomph.

“We both played sports and there was a lot of competition trying to be the best,” Justin said in an interview. “We both played on the same football team in high school and I was the quarterback and I wouldn’t throw him the football.”

That’s reasonable. Have some fun at practice, at the expense of your older brother. Don’t throw him the ball. Good stuff. Practice stuff. Not game stuff. Right?

“I’d throw him the ball, but he was not my first option,” Justin continued. “It was a sibling rivalry, and I wanted all the attention and did not want to share it.”

Honest words, indeed, from brothers who learned about striving to be the best and work ethic while growing up on the family farm. They called it their backyard homestead. They had chickens, pigs, rabbits and turkeys. Their dad worked the farm while holding other jobs. Hot tub repairman. Handyman. Salesman of used exercise bikes.

“We had plenty of stuff to keep us busy,” Eric said, “and that installed our work ethic.”

They went different ways, took different paths. Eric is in his 16th year as a member of the New Hampshire Air National Guard. His bio says he’s a highly respected and decorated air traffic controller and non-commissioned officer.

Meanwhile, Justin has a bachelor of science degree in industrial engineering from the University of Rhode Island. He’s got a master’s of business administration degree from UNH and is a certified project management professional.

About 10 years ago, the boys founded Stephens Brothers Properties and flipped houses.

And while that was going on, Justin was falling in love. He married Jennifer Clarke in 2017. She had built her own career in customer service and event planning.

Leading up to their wedding, Justin, formerly a big, tough quarterback with a chip on his shoulder, realized something: He liked planning weddings.

“It started when we looked at wedding venues for our own,” Justin said. “It sparked an idea in my head, and I liked this and as a family we could potentially own and operate our own. But it was a dream then, and I put nothing in motion to start the process.”

Eric’s sudden deployment to Iraq, his second, forced the couple to postpone their wedding, but as Jenn said by phone, “He was going overseas to serve our country, so it’s not like I could say, ‘No, don’t go’ ”

The wedding idea stayed with Justin after their own marriage. “I mentioned it once or twice to Jenn, but it did not come to fruition until after our wedding,” Justin said.

That’s when Justin, the meticulous brother, gathered his spreadsheets to show his new bride why this was a good idea, why it could work.

“He has converted me into more of a spreadsheet girl,” Jenn said.

Eric liked it too, and didn’t mind investing time and money while continuing to serve in the Guard for at least five more years. Justin and Jenn would be the hands-on, day-to-day people.

They wanted to buy land and renovate something already there, but couldn’t find that, after visiting 40 sites. They chose to build their own barn and bought the land on Bog Road, from the Lassonde family.

The back story, the one people in the area all know, is the one about the patriarch, Harold Lassonde Sr., who lived on the property, in a tiny house with no electricity. Everyone knew him as the ‘Old Man.’

He hand-fed Oreos and Fig Newtons to his 1,500-pound bull. Sometimes the big fella would take a stroll around the neighborhood.

“We had to get a variance from the city,” explained Eric. “We talked to people who had been here for 10 years or more and they would tell stories about how the bull would get loose and ravage their gardens.”

That’s where The Barn at Bull Meadow name came from, and the Lassonde family “were so happy we were paying homage to the land and its sense of history,” Eric said.

The Old Man’s home was torn down, empty for 10 years.

By fall, the build-from-the-ground-up barn will be ready, combining a rustic look with modern touches, such as designated bridal suites and a large outdoor patio area.

Jenn is the nerve center, the face out front, the boss, the one dealing with the MVP of the day, the bride, right up through the service.

“She will carry out the majority of the business relations with customers,” Eric said. “She will be the primary point of contact for events.”

Eric will help when needed, mow the lawn now and then. Like his wife, this will be Justin’s new life.

Then we returned to the old days.

“We are so close in age that we had a rivalry going on, whether sports or anything around the house,” Eric said. “We wrestled and had our fights, but our relationship has gotten stronger as adults working with our business together.”

In other words, in the grown-up world of raising children and financially supporting family, the brother who once played quarterback can no longer ignore the brother who played receiver. He’ll have to throw him the ball.

Outside of work, of course, there’s always room to compete, no matter your age. Recently, the boys drew a target and went shooting.

“See who could get closer to the target,” Eric said. “We were constantly putting up ideas, thinking about what to do next, how to go against each other.”

And then, in an instant, Eric admitted something you never would have heard back in the ’90s. He came clean.

“Justin was always better than me,” Eric said. u