The face of Concord: Work of Tom Devaney looms over downtown

by Ray Duckler | In Print 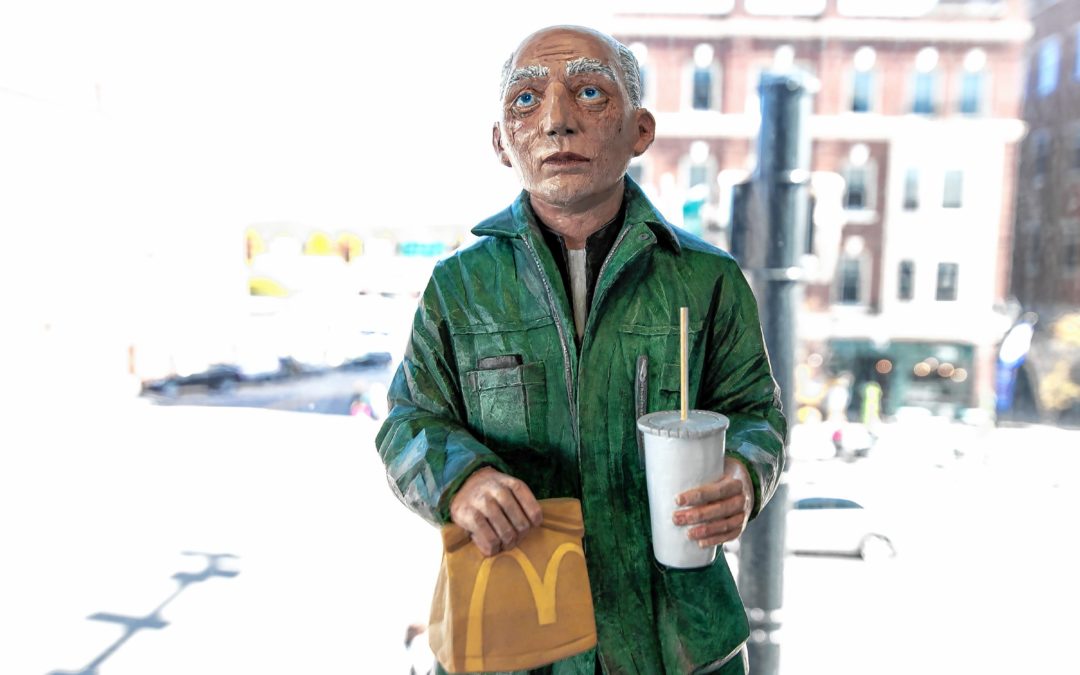 The visual exhibit on the top floor, glowing with life each night at the corner of Pleasant and Main streets, says a lot about artist Tom Devaney.

“The Face of Concord” – Devaney’s replacement last year for that giant eye we all got to know so well – opens a door into what makes this 55-year-old artist from Bow tick, what’s important to him, how he thinks, always wrapped around his sculptures and paintings.

In this case, look up at the windows of Devaney’s studio, high above Pitchfork Records, and you’ll see his friends and real models projected on a massive white background, a homemade stage made of plaster and gauze and steal and burlap. The faces appear on what looks like – once you get up close – the inside of a bowl, carved smooth by Devaney into a concave shape.

This is how Devaney expresses himself. His desire to bring a community together through art, of promoting diversity and communal feelings, of waking up and smelling the coffee.

Or looking up and seeing the faces. With eyes that follow your every move.

“The idea was this was kind of like a mirror that was reflecting back positive values,” Devaney explained. “My intention was to send out a positive, optimistic view, and the idea was that we are all part of this together, so I tried to get different kinds of people to be part of the modeling.”

Devaney’s studio has become a city landmark, strategically located for maximum visibility, that many Concord residents probably never inquire about or visit.

He’s been up there above what is perhaps the busiest portion of the city, the unofficial heartbeat, and his work is gripping and emotional. His forte is sculpting, and his work portraying a woman – naked and skinny – questions popular opinions and images of what sex appeal ought to look like.

He’s got sculpting degrees from the University of Michigan and Boston University. He’s taught art in Boston and New York State, and his work has been displayed there as well.

And he speaks in a gentle, soothing manner, saying just enough to help you understand, yet never rambling on. He lets his work speak for him, boldly, with important subtexts.

Nothing he’s done carries the magic of “The Eyeball,” a projection of a curious eye, looking around, searching, that spoke to Big Brother and the issue of surveillance, a hot topic since Sept. 11. The Eyeball, in different sizes, remained awake for six years.

Now, he shows full faces, smiling, talking, mouthing words to songs, giving you the opportunity to play a guessing game while standing on a street corner.

The most intriguing aspect of Devaney’s new creation locks you in, because the faces and eyes on display follow you, no matter where you move in that downtown area. Devaney said this has nothing to do with black magic or voodoo.

Instead, he said it has to do with the convex shoulders below the concave face. That, somehow, creates an illusion.

“Your brain perceives it as real,” Devaney said.

Plus, it gives you a wider view of Devaney, pointing to an element of his makeup – his humor – that’s easily lost, hidden by his relaxed persona.

He’s got cameras at his studio, meaning he and his wife can use their laptop to see what’s happening outside, when the stars come out.

“People roll out of the bars and can get pretty animated, and if there is something really funny going on we’ll watch,” Devaney said. “You have people running back and forth and kids saying, ‘It’s looking at me,’ and another saying, ‘No, it’s looking at me.’ ”

The faster you move, the faster the head turns, prompting Devaney to say, “People like to drive by in their car and watch the head go Vroom.”

Devaney relayed a story from a few years ago, when “The Eyeball” was center stage. A story about a bunch of late-night partiers who were intrigued that they were being watched.

“A bunch of them were drunk and they didn’t know what was going on,” Devaney said. “They tried to get into the building. I could see them running around, yelling at the eye, but that’s part of the connection, the play back and forth.”

And speaking of The Eyeball, Devaney admitted that that was more popular than his current project.

“There was some sort of connection to the eye; people enjoyed it,” Devaney said. “Yes, I miss the eye a little bit. It might make a comeback one of these days.”

Not anytime soon, however. Devaney said his “Face of Concord” will last until at least the holiday season, and he’s in the planning stages of another project with a fellow local merchant called “We the People.”

“There will be all sorts of people from the community again, but they will be up here in the studio all together,” Devaney said. “So if anyone wants to be part of that next project, feel free to contact me and you can be part of it.”

Then, Devaney summed up his building block for all of his work.