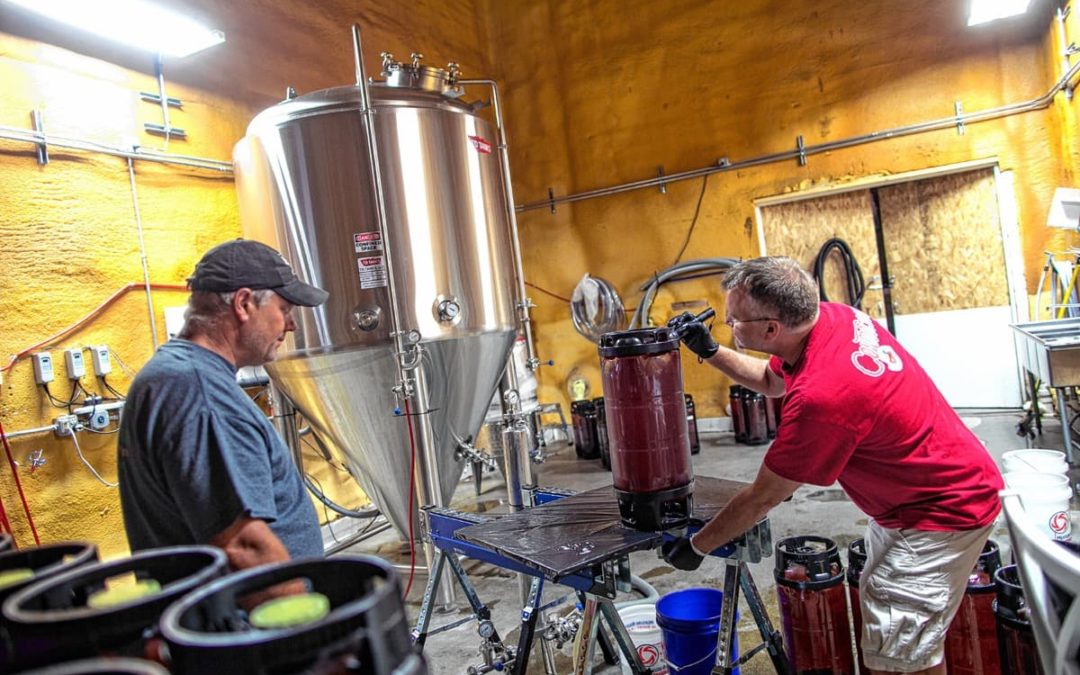 The effort to preserve Gould Hill orchard in Hopkinton is now served in a bottle, keg or can.

High up on the hill with views of nearby Mount Kearsarge and the White Mountains beyond, one of the newest offerings at the orchard is hard cider.

Rows of trees historically packed with McIntosh and Red Delicious apples are being transformed to grow lesser-known varieties, like Golden Russets, Ashmead Kernels, Jonagolds and Yellow Newtown Pippins. Grafting young branches on old trees is a way to bring back forgotten heirloom apples that dotted New England orchards a century ago, back when making hard cider was a Yankee staple. Prohibition changed all that, and apple growers wiped out their cider apples – with higher acids and tannins – in favor of milder varieties that made for good eating and baking.

At the turn of this century, China flooded the apple juice market, which drove down prices and wiped out a huge source of income for local growers. Orchards started going under, their centuries-old trees cut down to make way for houses on some of the most picturesque land in the state.

Gould Hill was no exception. The farm was for sale and in danger of disappearing.

In 2009, Tim and Amy Bassett took over Gould Hill, first leasing the land and trees, then buying it a year later. The couple with three kids had bopped around the Concord area, first living in Henniker, then Dunbarton and finally Hopkinton in 2004. Tim had a farming background and Amy liked to think big, so they decided to take over the beloved orchard atop Gould Hill with the spectacular views.

They immediately set out to grow their business to pay off their mortgage and keep the orchard open to the public.

They planted row after row of blueberries and thousands more apple trees. They offered pick-your-own peaches and converted the barn into a commercial kitchen capable of pumping out pies, cider donuts and other sweet treats.

The cash flow was good in late summer and fall, but revenue was slim the rest of the year.

“We had a couple bad seasons in a row,” Tim Bassett said. “From January to July, it was a constant struggle of, ‘how are we going to do this?’ ”

They were looking for a product that could sell year-round, something different.

In 2015, Tim Bassett incorporated the Contoocook Cider Company with a plan to make hard cider – not like Woodchuck cider that many of us have tried at the bar, but a more artisanal blend, one that captures the local flavor of the orchard.

One of his customers, Mark Strader, was buying lots of fresh cider each year and fermenting it into a crisp, refreshing, slightly carbonated beverage.

Mark and Tim decided to go into business and by the end of 2017 the first bottles of Contoocook Cider were on the shelves.

Despite the stunning views from the orchard’s grounds, Strader’s workspace is abruptly less picturesque. His laboratory and brewhouse is an insulated room that was built years ago for apple storage. It’s great for cider making because it can keep the temperature steady inside during the heat of the summer or cold of the winter. One drawback: no windows.

Such is life for Mark the mad scientist, who’s learned to blend different apple varieties like a culinary Mozart.

Strader started out as a homebrewer, making beer and improving his craft with each batch. Like many alchemists, he started looking for new flavors and decided to try a hard cider. Every fall, cider was everywhere and easy to get, and the end product was tasty as heck.

Once Strader and Bassett got to talking – one man had the know-how and the other had the product – their tasty partnership was formed.

“We take some of the sweet cider he’s got, turn it into hard cider, and you’ve got revenue all year round,” Strader said. “I like to call it weather-proofing his business.”

Amy Bassett was on board, too: the business venture fit into her overall vision of diversifying the orchard to give people more than just a bag of apples when they came up the hill.

“When we bought the farm, we wanted to give people an experience,” Amy said. “We wanted to be part of the community. It’s paid off because people do appreciate us being here.”

But for all the thank-you’s they got for keeping the orchard open, some people in town don’t even know Gould Hill is making its own hard cider.

That’s why Amy has become an ambassador for cider. It’s gluten-free, it’s not too sweet, it’s local, she tells people. When they try it, they love it, she says.

“I think our cider shocks a lot of people, in a good way,” Amy said.

Two of their blends – their Cranberry and Contoocook Blend – were recognized by the Seattle Cider Awards with Double Gold Grand Awards of Excellence.

If you haven’t tried cider, here’s a primer.

By using different varieties of apples – with different sugar contents and acid levels, the cider can take on the characteristics of a fruity beer – think apple lager. With a little extra alcohol, it can be reminiscent of a white wine – think sparkling pinot grigio or try to imagine what apple champagne would taste like.

It can be blended with other New England fruit to take on entirely new flavor profiles and colors. All of Contoocook’s products have between 6.9% and 9% alcohol, but since Contoocook is licensed as a winery, not a brewery, they can conceivably crank up the alcohol content to 24%, but there are no plans in the works for an apple-blueberry port wine, according to the cider masters.

Contoocook offers a blueberry cider, which is sold in bottles. Its cranberry cider is available in cans and growlers. Another offering, Fireside Maple, is blended with 60 gallons of Gould Hill maple syrup, producing a mind-blowing semi-sweet beverage that tastes more mapley than sap when it comes right out of the maple tree. Another blend uses local honey.

And like grapes, each apple variety has its own characteristics, opening a world of single varietals, like the Chestnut Crabapple, which is woody and tannic and offers the boldest flavor in Contoocook’s cider line.

Or they can be used to create infinite blends capable of producing bouquets of flavor – like their award-winning Contoocook Blend, which uses Golden Russet, Yellow Newtown Pippins and Chestnut Crabapples. And as the trees begin producing even more of these heirloom varieties – like the red-fleshed Redfield apple – the options will continue to grow.

Things are going well enough that the orchard has added a second fermenter to potentially double production, but they are wary of getting too big too fast. Quality is their number one goal, they said.

There’s an ethos behind Contoocook Cider Company and Gould Hill Orchards beyond apples and alcohol. Its owners and their brewmaster are producing something from the land where they live and work. They view themselves as business owners and stewards of the land, keeping the orchard grounds open to the public year-round.

One thing that both the business owner and the customers seem to appreciate is the cider’s local roots.

“We’re using our own apples,” Tim Bassett said from inside the wood-lined tasting room. “It’s tree to glass. It literally comes off that press and into our fermenter.”

Strader smiled at the thought.

“I can’t stress enough how fresh that is to have that juice pressed off and into our fermenter in a day,” he said.

But there are still risks, like hail and blight.

“We’re living by Mother Nature out there,” Tim Bassett said.

Generations of families have come to Gould Hill to pick apples, take pictures and make memories. More than anything, the Bassetts say they want to preserve that for generations to come.

“We keep wanting to go further,” Amy said. “We hit our original goals but we definitely want to continue to grow the experience.”

Where to find it

Getting the product onto shelves and into restaurants has been as slow as making the cider itself, but that too is expanding. Locally, it can be found at the Concord Food Co-op, Buffalo Wild Wings and Riverhill Market. In Hopkinton and Contoocook, the cider can be bought at Colonial Village, Everyday Cafe and the Lakehouse Tavern.

Still, one of the best places to try the cider is at the orchard itself, where you can grab a growler and a bag of fresh apples.

The Contoocook Cider tasting room is open weekends year-round with extended days and hours during peak picking season. Stop by Gould Hill Farm and check out these award-winning ciders for yourself. u