Jeanne Gerulskis has her eye in the sky

by Ethan Dewitt | In Print 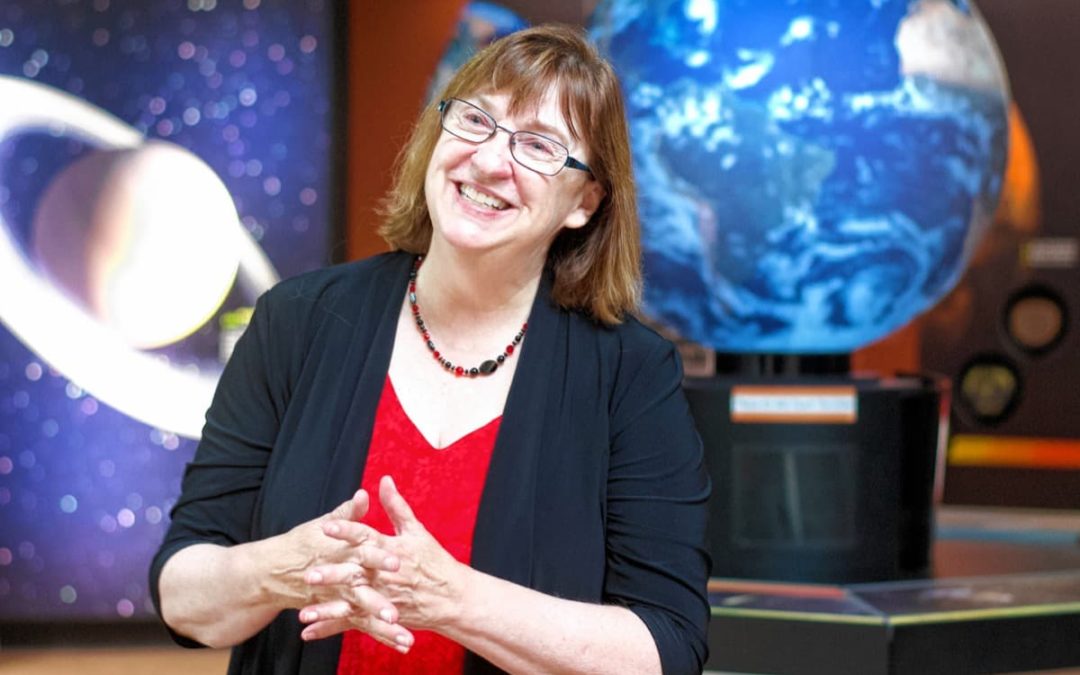 There’s a whooshing sensation to entering the McAuliffe-Shepard Discovery Center – the darkened entranceway, the solemn, close-quarter hallway, and then, all at once, the massive bright atrium with aircraft and space artifacts aplenty. The effect is not unlike taking flight itself. And it’s by design, says Jeanne Gerulskis, the executive director of the Concord center.

But it wasn’t always like that. Twenty-one years ago when Gerulskis first visited, the center was fairly bare-bones – a low-lit walkway focused entirely around one feature: the planetarium.

“I came in from the day I was interviewed, and it was dark,” she said. “And the lights were all broken on the walkway. And we walked in and it was all these blues and grays and a really somber feel to it.”

It’s come a long way. Over two decades, the Discovery Center has grown into a force in central New Hampshire, with a major expansion of space and exhibits, and artifacts added by the year. And Gerulskis has been there at every step.

Gerulskis, a Massachusetts native, attended Williams College. Initially attracted to biology, she eventually switched to economics. But her path was not quite linear. She took three years off before graduating to work at a food education center in Northampton, a position that taught her skills in marketing and communications.

And along the way, she found adventure. A road trip to Alaska with a friend opened her mind. After college, she was back, planting her feet in 1979 in a small town 130 miles south of Anchorage. The weather was frightful, but the lifestyle proved irresistible.

Getting by in small-town Alaska requires no small amount of resourcefulness. “You kind of had to do whatever you could find to do,” Gerulskis said. She tried it all: bartender, rock musician, cab driver, log scaler for timber en route to Japan.

One day, work took her to the Alaska Marine Highway, the ferry system connecting some 3,100 miles of coastline that roads often cannot. That job brought her south to Ketchikan, an island town near the southernmost tip of the state, population 7,200.

She bought a floating house, got married, had a son. She spent her days wrestling with lines for ferries “as big as a cruise ship.” She never had intended to stay.

“I think after all those years of intellectual pursuits, I kind of had something to prove,” Gerulskis said. “Like I wanted to be the tough person who could do all this.”

Somewhere in Ketchikan was a museum. Two of them, in fact.

For Gerulskis, it was a career choice years in the making. She’d spent years of her childhood not avoiding museums but seeking them. Her father, an artist tied to the family soft drink business, had kindled an appreciation for paintings. But Gerulskis leaned toward science and history, and Alaska offered plenty.

From working with native artists to designing a canoe-building workshop, Gerulskis worked her way up the ladder, gaining experience and eventually vaulting to the senior curator of programs for the two museums. One leap of faith and a 3,600-mile road trip later, she found herself in Concord’s darkened planetarium, in 1998, deliberating what to do next. She already had a few ideas.

“I realized we’re going to have to brighten it up. And so we did. We added exhibits all over the place and posters, but there just wasn’t that much room. So we had exhibits on the walls, on the floor and the ceiling, and everywhere we could fit them. But it just wasn’t adequate for what we needed to do.”

Gerulskis knew she wanted to expand the space from a school trip planetarium to a museum of science and space. Getting there was as winding a bureaucratic tale as NASA itself. With the blessing of Gov. Jeanne Shaheen and Sen. John E. Sununu, through earmarks and funding matches and blueprints designed and redesigned, the center finally opened, 10 years later.

Then, as the recession hit, Gerulskis had to keep inventing through a wave of budget cuts.

Gerulskis has learned something through her childhood and decades in the museum business: The successful exhibits aren’t always the ones with the priciest items. More important is that they build an environment to whisk away the kids.

“I think you really need to make a personal connection to want to learn more,” Gerulskis said.

Knowing the details of Alan Shepard’s childhood in Derry or Christa McAuliffe’s wonder at the moon landing is one thing. Putting yourself in their shoes and seeing a path to follow them is something else entirely.

It’s a truth driven home by her experience living with an artistically driven father, one who would encourage his children to draw on the walls when replacing wallpaper.

“When we would see the art in the museums, we felt like it was part of us – we all thought we were artists, too,” she said.

Science is different than art, Gerulskis says. The exhibits must be tactile and immediate. Simple concepts can be difficult to grasp. Basic activities and big visuals are a must.

For that, the center is well equipped. Kids have an 81-square-foot puzzle of the moon, a tire of a space shuttle to climb, display cases of toothpaste and hairbrushes, a space toilet and a new “moon colony” exhibit – launched in July to commemorate the 50th Apollo 11 anniversary.

They can climb into a simulated space shuttle cockpit, remotely control a set of robotics on the moon, and run their fingers across a 3D printout of the craters of the moon.

Or they can sit back and let the planetarium take over, upgraded from the days of slide projectors.

Of course, then there are the legacies of the center’s namesakes. Near the entrance is a wall of chrome, adorned with descriptions of Shepard, the first American in space, and McAuliffe, the teacher chosen among 11,000 applicants for the Challenger trip.

Inside lit cubbies are mementos of the two: a flight book, a magazine. There are quotes from the two for inspiration. But there’s no mention of the tragedy that claimed McAuliffe’s life, and rocked a city.

That’s intentional, Gerulskis says. The center is there to boost the imagination, not burden it. And Christa led her life to lift the next generation. “I touch the future; I teach,” reads her quote on the wall.

Still, Gerulskis feels the legacy of the two every time she walks into work. Especially when she thinks about the place in their honor. “I hope she would love it,” she said of Christa. “Her mother said she would.”

As she speaks, a family wanders by on the way to the atrium, pausing at McAuliffe’s gleaming smile.

But they don’t linger long. There are stars inside, and spaceships. u