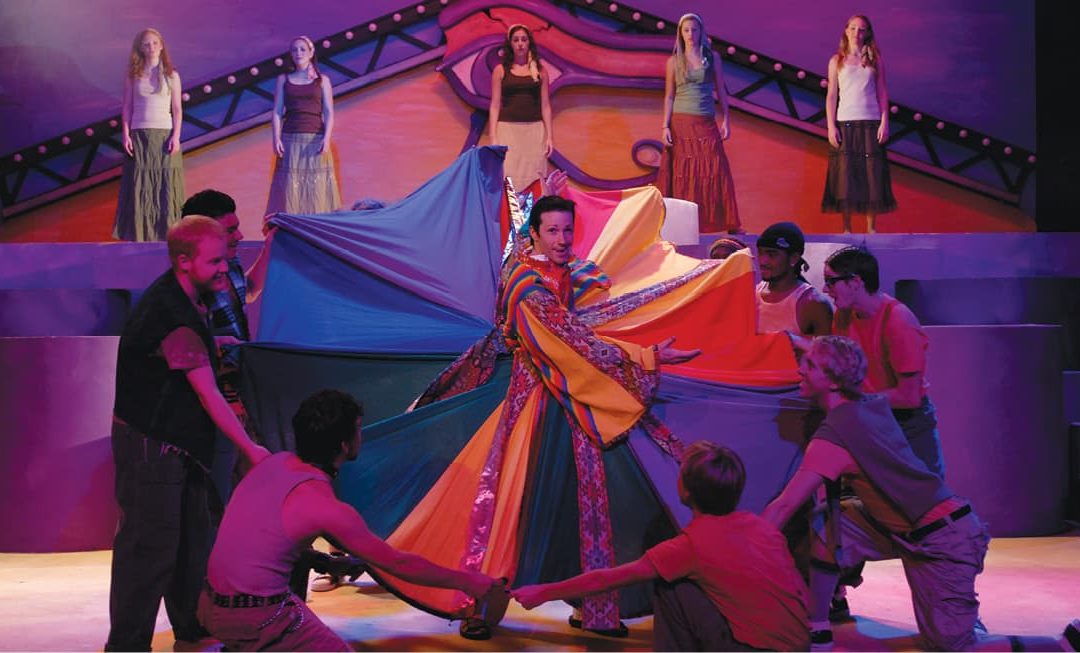 Ever wonder what it’s like to be a professional summer stock actor? We did, too. So, we got in touch with Landon Shaw—an actor, director, playwright, and member of the Actor’s Equity Association with more than 25 years of professional experience—and asked how he got his start and what it’s like.

LANDON: I was born and raised in Chicago and broke into the Chicago theatre scene there and worked for a lot of great companies there. But one of the things you are taught early on—and I am 45—is that the business is always evolving. No matter where you are in your career, it’s key to find a way to work with different theatres and specific directors and artistic directors and playwrights that you are drawn to and appreciate their work. And when you focus on that, you will find that you have more opportunities than holding out for one theatre or a Broadway show and all the rest.

For me it has always been about being a working actor and taking the working piece seriously. With that in mind, I wanted to get into New England because you have a lot of networking, you have a lot of contacts, and theatre as a whole is a lot stronger with an incredible history behind it and connections to theatre even beyond New England. It’s just so wonderfully associated with the theatre community.

I am consistently looking for new markets and directors and new exciting theatre companies and when I came upon the Winnipesauke Playhouse—and have subsequently done tours all along the East Coast—I’ve found there is a great attitude and savvier theatre goers that appreciate actors, directors, playwrights, and companies that are willing to take risks.

I sought it out. It wasn’t something that fell in my lap. I want to be in that area. I want to be where theatre is always evolving.

AROUND CONCORD: And you found all of this in New Hampshire?

LANDON: Yes. Absolutely. Just this past spring at Winnipesauke Playhouse I did a play that was for all intents and purposes making its East Coast debut. I think this is true of everything from the Ogunquit Playhouse to the Winnipesauke Playhouse and all the many regional theatres. Because of their subscription base and audiences and because of the proximity to Broadway and theatre in general, we are able to take real artistic risks, push ourselves, and not be quite so commercial as in other places.

Theatres in New England and New Hampshire are doing new works and taking the classics and asking how they can spin this around and challenge themselves and engage a new audience. So it is attractive to those who want to be challenged and are looking to push themselves and be part of a true artistic expression.

AROUND CONCORD: There must be some downsides.

LANDON: Ultimately for me, number one is that I have to leave my family. I have a wife and a home, and I’m established in the Midwest, and so that’s a dance in itself. Also, I am not a known name in New Hampshire, so I don’t have a network or an audience base that knows me like I do in Chicago or St. Louis. In a sense I’m starting over again. But at the same time, that’s very exciting. I really get to challenge myself and do things I wouldn’t normally get to do.

AROUND CONCORD: Waiting for Godot got its start by being persistent, even being performed in a prison.

LANDON: Yes, absolutely. And in New England you have a lot of great regional theatre companies and there is a nexus of artistic directors, directors, playwrights, producers, and others who are paying attention. You can be seen and appreciated by these people who are working to move this art forward and grow the audience for theatre in general and get to act in specific plays that are first developed in these smaller theatres.

AROUND CONCORD: Is there an anecdote that sums up what it’s like to work summer stock?

LANDON: Mine is that summer stock theatre—no matter how old you are—is, for lack of a better word, like summer camp. Truly. You are put together with a bunch of people with whom you have one thing in common.

This summer I’m going to be put together with a bunch of theatre artists and we are going to live together, eat every meal together, do crazy things together, and ultimately there will be stress. There may be tension and we might get on each other’s nerves, but you become a family very quickly and learn to respect each other very quickly. Each summer when you leave you can’t believe it’s over, even though you may have driven each other crazy. You become this dysfunctional, really fun family at theatre camp.

There is everything you can imagine that comes with the stress of pulling together a fully formed professional theatre production within 13 days. We’re mounting one show and immediately starting rehearsals for the next show, and the minute that show starts we immediately start rehearsals for the next one. At any given time, you have two or three shows in your head. There is no rest or a chance to breathe. You are working nonstop.

AROUND CONCORD: So the stereotype of building car as you drive it is true?

LANDON: Yes. There is definitely some truth to that. But god forbid something happens, as it always does, we are trained professionals and able to plug that hole or fix whatever needs to be fixed. The show must go on is more than just a saying. There’s a lot of truth to it.

AROUND CONCORD: Broadway calls. Do you give up summer camp in New Hampshire for Broadway or stick with it?

LANDON: Honestly, at this stage and where I am in my career, it would have to be something really, really worthwhile. Broadway is nice and I love it and it definitely has its positive aspects, but sometimes the most incredible artistic experience and most powerful show can happen in a church basement with very little lighting and very little set.

Money does not always make for the most artistic masterpiece. Broadway is so about the money that they don’t take a lot of risks. They tend to stay with actors that are known quantities and shows that they feel sure are going to sell tickets. This doesn’t mean there isn’t art happening there, but you can find amazing art being produced in places such as the small theatres in New Hampshire. As much as Broadway is what everybody tries for, I want to be challenged by something and I want something that I find value in and that pushes me.