Find Peace with a Digital Detox 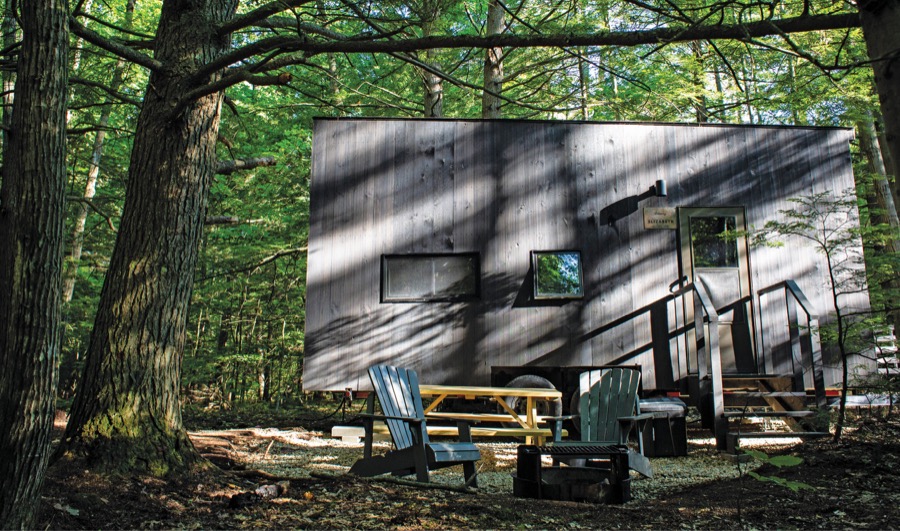 When it comes to determining how close to nature a place is, the dark has always been my barometer. Growing up on the side of a mountain in rural New Hampshire meant making peace with the dark. It was necessary, so I could experience the better parts of rural, nighttime activities: catching fireflies, standing around a bonfire, a midnight game of hide-and-seek, and peering through my dad’s telescope to catch sight of Mars, all required learning to be easy with the dark.

This also meant being at peace with nature after the sun has gone down. One can’t grow up sneaking down to the town beach at night to go swimming without becoming comfortable with how darkness turns the scuffle of a squirrel into a rapidly approaching threat.

To live in a state that is 83 percent forested—as of 2016—was never a chore to me. Indeed, the isolated stretches of trees and rivers and mountains, and the clear view of the stars that comes with them, have become the standard by which any other outdoor experience is measured.

So, when I was asked to spend a night at the Southern New Hampshire–located Boston outpost of Getaway—a company that offers “Simple escapes to tiny cabins nestled in nature” to those living in Boston, Washington, DC, and New York—I wasn’t sure I’d get anything out of it.

The idea behind Getaway is to disconnect from everything—work, the digital-sphere, and of course your cell phone—and just be in nature. The company doesn’t tell you where your outpost is located until you book, a process that is all done online. Even your access code to your cabin is emailed.

When you arrive, your cabin is furnished with beds, a small sitting and cooking area complete with rudimentary cooking and eating utensils, and a bathroom (no mirrors included; those are “analog selfies,” notes a guidebook in your cabin). There’s a firepit outside with a box stocked with firewood.

Getaway offers you coffee, tea, oatmeal, even pasta that, should you choose to use them will be added to your bill after you leave. Truly, you do not have to talk to anyone from the beginning to the end of your stay.

There also isn’t much for you to do. Getaway provides you with a few books, but the goal is to leave all your electronics behind. There’s a cell phone lockbox where you’re encouraged to drop your phone for the duration. If you need something to do, the company notes nearby parks and hiking trails.

But all these things are part and parcel to rural New Hampshire living. “Couldn’t I just pitch a tent in the woods?” I wondered to my coworkers. “Wouldn’t it be the same thing?”

Not quite. Getaway’s cabins are air conditioned as well as air and noise tight. Shutting the door feels like shutting out the world. It’s not glamping—glamorous camping—in any sense of the word. It’s more like the bare necessities already in place for you, no effort required.

But as Liz Frantz, a friend and photographer, and I settled into our cabin for the evening, it dawned on me that the effortlessness of Getaway is one of its perks. “How many things I don’t need,” Socrates said, and that’s one of the ideas Getaway executes well. Sometimes you just need to walk away from the staples of your daily life to reevaluate their place in your world.

The Appeal of Disappearing

Getaway cofounder Jon Staff knows this all too well. Like me, he grew up in nature-by-default in a one-street town in Northern Minnesota whose population he said now hovers around 29. He now lives in New York, and when we spoke on the phone, the sound of police sirens cut through the background cacophony of an urban soundscape.

Pete Davis, a college friend of Jon’s, got the idea to start Getaway after they both realized they were burnt out from working too much. When they discovered tiny houses, Jon said the idea of sticking one in the woods somewhere, sans Wi-Fi, and disappearing appealed to him immensely.

“We want to provide people the time and space to just be, to do nothing and plan nothing” he says. “And to be bored. When was the last time you were really bored? For most of us it was probably childhood. It’s not a pleasant experience, but if you push through it, incredible things start happening.”

I wouldn’t say disconnecting was really about boredom, at least not for me. The moments that stand out are the ones I’ve lived all my life: the joy of getting a small fire to flare to life after a few minutes of feeble flickering, or looking up into a canopy of stars I haven’t been able to see since I moved into the light pollution of Concord almost two years ago, or sitting with my cup of coffee in the early hours, alone, looking out at a wall of greenery with nothing but the sounds of birds.

Those moments were more like meditation than boredom to me. They invoked some peace that only the outdoors can bring. It made me realize how far away my busy life had taken me from the simple joys of being in nature, even though that peace is so much more accessible to me as a New Hampshire resident than a city dweller.

The Choice to Disconnect

Getaway’s website warns that cell service may be spotty, and that Wi-Fi will never be an option. But data was still very much available to me when I first arrived—before I put my phone in the lockbox. And walking around the grounds (clearly located on the bones of a former campground, water and electric hookups still populating empty sites), I spied a few lit phone screens.

I get it, though. It’s easy to forget that rolling over in the morning and checking your phone is a relatively new norm in our society, driven by increasing demands on our time and attention. Social media makes maintaining emotional bonds easy by putting updates and snapshots of people’s lives at our fingertips. Keeping up with the news is unavoidable when headlines and daily briefs are sent to our inbox first thing in the morning.

When technology is a staple of your life, it’s hard to walk away from it. But to really enjoy Getaway means making an active choice to engage with its mission. According to Jon, a good amount of people do just that.

“It is, of course, a choice to disconnect,” he says. “Putting your phone in the lockbox prompts you to put it out of sight and out of mind. People ask us why we don’t let work retreats happen here, why we don’t have Wi-Fi. We want to be the one place in the world where there isn’t a chance to be online.”

And though you might think the Boston outpost would be primarily visited by residents of Massachusetts and other New England states, Jon says that isn’t always the case. “When we first opened our Boston Getaway location, I thought that everyone would be from Boston,” he states. “But then I checked the billing addresses of our first few guests, and a lot of them were actually from rural Southern New Hampshire.

“I remember thinking, ‘Wait a minute, why are they giving us their money?’ I called some of them and they said some version of, ‘I live in the woods, my house is a mess, my kids are annoying me. I just want to focus on me and have some peace and quiet.’”