Angus Boezeman: A Life on the River 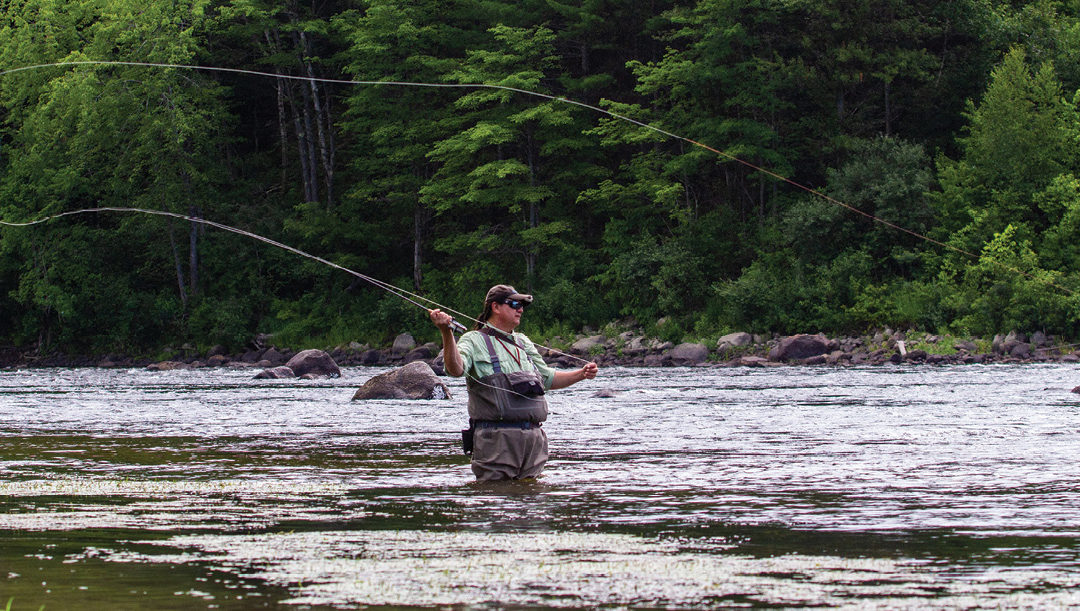 Reading a river and the graceful finesse of casting a fly

Upon first meeting with Angus Boezeman, I told him, “I don’t know a thing about fly-fishing. My family is athletic, but only in sports involving balls: soccer, baseball, basketball, and mainly golf.” Angus chuckled and said his brother is a golfer and has a career with a golf-supply company. Their joke is that they have graphite in common—golf club shafts are made of it, as are high-end fly rods. I was quickly drawn to Angus’ likeable, lighthearted personality.

Angus is a Concord resident who is well-known as a fly fisherman, teacher of the sport, and licensed guide, all of which he has been doing for 30-plus years. His reputation spans not only the state of New Hampshire but also broader fly-fishing circles.

Angus spends most of his fishing time on the Upper Connecticut River in Pittsburg, New Hampshire, but when he takes time to do his own fishing, he heads to Cape Breton, Nova Scotia. “I can’t wait for October. The fall is a special time to fish Atlantic salmon,” he said.

Although “fly fisherman” is the term most often used in conversation, Angus uses “anglers” when referring to the growing group of women taking up the sport. I told him I’d love to learn more about that, and within a couple weeks Angus and I met on a 90-degree July morning at Sewall Falls, a public recreation area in Concord on a scenic stretch of the Merrimack River.

A Bit of Background

Before taking a few casts, Angus and I took a seat at one of the picnic tables. Like any good fly-fishing guide, he had a cooler from which he offered me an ice-cold bottle of water. As he handed me the water, Angus exclaimed, “Look! An eagle.” I turned around just in time to watch this avian fisherman glide upstream.

The area where we sat might have been off limits had the proposed hydroelectric facility become reality back in the 1980s. Angus and many Concord leaders fought the project to preserve the natural watershed. It pleases Angus, too, that Native American artifacts were found, offering evidence that the area was a stopping point for tribes riding the rapids in hand-built canoes.

Angus is passionate about sharing information, and it flows from him like a fountain. When you hear about teachers winning titles of Best Teacher, Angus would fall into that category.

Fly-fishing, he began, was recorded by Confucius in the fifth century BC. In ancient China, fishing was done using pure gold hooks and spun red silk. The sport made its way to Rome and then the rest of Europe where long horse hair was used for the line. The sport finally arrived in the Americas in the 1800s.

While Angus and I sat chatting and watching the river flow by, a man wearing a straw hat and carrying a rod and gear bag came walking out of a trail.

Angus replied, “I’ll be out there later.”

The man said he had tried some nymphs up the river. This type of fly sinks down to the cooler water, where the fish like to idle. “Fly-fishing has a lot to do with insect life,” said Angus. “Trout eat bugs.” As he spoke, he explained the importance of caddis flies, stone flies, and midges to fly-fishing.

While many people take up fly-fishing through family tradition, Angus is completely self-taught. The idea came from a colleague who offered to teach Angus the sport. Angus was interested, but unfortunately his friend moved away. “There were no teachers and places where you could learn. It was not at all like today, where you have guides, books, and YouTube,” Angus said.

Angus first learned to fish with a spinning rod and real, which he described as the way many fishermen get their start. He also said many never get beyond this simple casting technique where a lure is basically tossed and drops where it lands. “It’s like throwing a softball,” he said.

Casting a fly is quite a bit different because the rod is longer, lighter, and far more flexible and the line is heavier and coated in colorful plastic with a weightless fly tied to a thin, tapered, three- to four-foot-long leader. You can’t just toss a fly like you can a lure.

As Angus demonstrated the difference that hot day on the Merrimack River, his casting technique was elegant and graceful. “Finesse is the key,” he emphasized. The ease of his movements, his focus on the line, and the melodic whoosh of the line rhythmically casting back and then forward through the hot air were mesmerizing.

“Try it,” he said as he gently placed the rod handle in my hand. Known to be an anxious learner, I was surprisingly very calm. It took a few attempts and then Angus enthusiastically exclaimed, “Perfect, Kathy.” What a feeling! I loved it.

As I took more casts and Angus explained how to read the river to find where a trout might be lurking, I could see that fly-fishing is something akin to a golfer reading a fairway or green.

Before meeting Angus, I knew nothing about the art of tying flies. Angus shared several boxes of his own flies, which are mostly made of fathers, colorful thread, and other materials. When combined in specific patterns, they become dry flies (which float on the water), wet flies (which float and sink just below the surface), nymphs (these sink), and streamers (which mimic minnows). As he described each fly, he happily remarked, “I have 40 more boxes at home. My wife doesn’t know what to do with me.”

Because Angus is burly, with large hands and fingers, it’s difficult to imagine him tying such minuscule knots. Angus said he just loves doing it. It comes from being detail-oriented, a necessary trait of anglers.

The breadth of Angus’ knowledge is impressive. As a result, his expertise is in high demand by Hippo Press, PBS, NHPR, Trout Unlimited, and Eastern Fly Fishing and other publications. A Japanese television program produced a documentary featuring Angus. For many years, Angus was the subject of the Concord Monitor column, “Anglers’ Journal.”

His secrets are also in demand. In the May/June issue of Eastern Fly Fishing, Angus finally revealed the long-held private details of one of his most famous custom flies. There are thousands of patterns for flies and, for years, fisherman had asked Angus what materials and tying techniques he was using, having heard of his success on the Upper Connecticut River. Finally, Angus told the article’s author, Christophe Perez, “At 60, it might be time to pass it on.”

Angus’ pattern for a UC Scout—ranked among the most productive flies to attract trout and land-locked salmon—is a three-inch-long fish called a pin smelt. It was fascinating to learn that fish know what’s real and what’s not—accurate details like the length of the fly, the color, and even a thread or feathers that float like the wet hairs or wings of a real insect are critical.

When we returned to the subject of women anglers, Angus shared several surprising facts. The first treatise on fly-fishing was written centuries ago by a British nun. Women have always fly-fished, and the trend is growing. During a recent group class, 40 percent were young women. A woman in her 30s recently told Angus she could fill one class with women from her company.

When asked if he sees any differences in abilities, Angus didn’t hesitate to say that fly-fishing is about finesse and timing, traits women bring to the river. “It is great to watch them. Women learn well, are detail-oriented, and can be phenomenal casters. A 100-pound woman can outcast a 250-pound man, all because of technique.”

According to Angus, he has encountered every fly-fishing problem you could imagine. He’s made every mistake in casting, lost his net in the water, slipped and fallen into the river, missed the boat back to a lodge, and had to change a fly and tie a new one by moonlight. But he wouldn’t have it any other way. The challenges continue, and that is the fun of it. And for Angus, it is clearly his passion.

Angus has tried to retire from guiding but can’t seem to give it up. “I just can’t say no. It’s like being in the Mafia,” Angus joked. “Once you are in, you can’t get out.” Angus said his pure joy comes from seeing other people catch a fish or cast a great line. I heard that excitement as he instructed me and held my arm to guide my first casts.

Angus has an 85-year-old client who he has been guiding for 30 years. He also gets great enjoyment from fishing with his five grandchildren. The joy in his face was evident when he talked about how his nine-year-old granddaughter wrote a journal on how she spent her summer vacation; it was about fly-fishing with her grandfather. Angus said his six-year-old grandson wants to move to Pittsburgh someday and asked Angus if he would go with him. Angus answered, “It’s a deal.”

Maybe Angus has a retirement plan after all. However, it’s doubtful that will happen anytime soon.

Steps to Get Started:

Take a class. Many are offered today. New Hampshire Fish and Game (wildlife.state
.nh.us) holds classes two or three times a year, Orvis has the 50/50 On the Water program (5050onthewater.orvis.com), and Becoming an Outdoors Woman (www.nhbow.com) workshops offer beginners the opportunity to learn outdoor skills like fishing.
Consider a private class. Tall Timber Lodge in Pittsburgh (www.talltimber.com) has skilled instructors, including Angus.
Hire a guide. This will help you go from a beginner to a more advanced angler. A guide will be nearby to offer advice and opinions, just like a golf professional.