A Place Born for The Creative Spirit 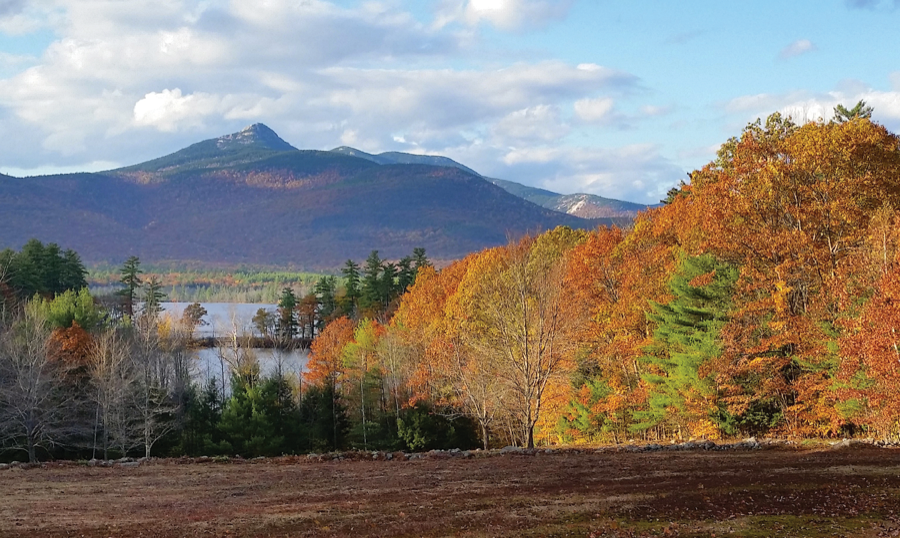 Tamworth offers a fall destination worthy of any artist or writer . . . or those with a penchant for beauty

Tucked between the Lakes Region and White Mountains, the five hamlets of Chocorua, Wonalancet, Whittier, South Tamworth, and Tamworth cluster in a picture-perfect, pastoral landscape to form the town of Tamworth.

Secluded and bucolic, Tamworth contains myriad vistas including that of the spire of Mount Chocorua rising above its self-named lake. This is, perhaps, the most photographed mountain scene in all New England that has been viewed by the family of President Grover Cleveland and the Quaker poet,
John Greenleaf Whittier.

Tamworth is also the home—among many other cultural artifacts—of the Barnstormers Theatre, the oldest professional repertory theater in America. As such, Tamworth represents a portmanteau of pastoral beauty and artistic creativity that has been a beacon to artists for generations. Painters, musicians, writers, craftspeople, actors, playwrights, glassblowers, and many others have—and continue to be—pulled into Tamworth’s irresistible and welcoming orbit.

It is a community of creatives who call the area home for at least part of the year and revel in a countryside that soothes, revives, and enchants the eye. For residents and visitors alike, Tamworth slows the hubbub of modern life to a distant, almost inaudible murmur.

In fair-weather months, halcyon Tamworth offers numerous sites to visit and sights to see both on and off the beaten path. Visits usually begin at the Remick Country Doctor Museum & Farm (www.remickmuseum.org) on Cleveland Hill Road, just a short walk from the center of Tamworth Village. The museum, which is a historic home and working farm, features historic buildings, a milking barn, walking trails, a children’s garden, herbal workshops, fiber arts demonstrations, and farm-based workshops and activities.

The 14th Annual Harvest Festival, set for Saturday, September 22 from 11am to 3pm, includes activities for all ages, such as games—jump the hay bale, scavenger hunt, and egg race—tractor-drawn hay rides, meet and greet a slew of farm animals, demos and participation in apple cider pressings, traditional wood sawing, corn grinding, and building a bird house. Visitors to the Harvest Festival can also enjoy live music by Brier Hill Band and scratch their shopping itch by browsing the museum’s store and farm stand. A special lunch menu is also available at the festival.

The Lyceum & The Other Store

Across the street from the museum, two tantalizing eateries beckon. The charming and old-timey general and hardware store features a lunch counter called the Other Store. One can quite literally pick up a can of paint, odds and ends for dinner, and then a lunch consisting of locally produced ingredients followed by a slab of fresh-baked pie.

Then, next door there is the Tamworth Lyceum, an upscale café, gift shop, and grocer where you will find postcards and other trinkets. In the morning, they make one of the best espressos or lattes you’ll ever have plus a baked item or egg sandwich that is hearty and wholesome.

The Lyceum and Other Store provide outdoor seating made better with the option of dipping one’s feet into the clear waters of the ambling Swift River, just steps away.

But, if you are there Saturday morning, you can pick up a fresh-baked loaf at the Tamworth Farmers’ Market (www.tamworthfarmersmarket.org). Though of modest size, this is one of the best attended and provisioned farmers’ markets in the state. With fall upon us, the harvest of apples, peaches, carrots, tomatoes, potatoes, and other fresh comestibles is one not to be missed. There are also fresh eggs, hard cider, maple syrup, berries, cutting boards, and locally produced wool as well as live music and a thrift store in the church.

You will also run into a booth hosted by the New Hampshire Mushroom Company, which itself is just a few miles from the center of town on Gardner Hill Road. Their blue oyster and chestnut mushrooms are the best in the world (in my personal opinion) and they offer guided tours on weekends. Well worth it.

The farmers’ market is held on Saturdays from 9am to 1pm from May through October in the parking lot of the Unitarian Universalist Fellowship of the Eastern Slope church.

Another prominent sight on Main Street is Tamworth Distilling and Mercantile (tamworthdistilling.com). Of immediate interest is that half the structure is occupied by a mammoth copper still.

Ley Line of the Arts

Ringed with mountaintops, deep valleys, and glacial lakes, Tamworth exudes a singular siren call to artists who color the community with many special events. The Tamworth History Center (tamworthhistorycenter.org) hosts a sale and exhibit of paintings titled Impressions of the White Mountains from August 5 through October 8. Among the displayed artists are Champney, Casilear, Coleman, Gerry, and a’Becket.

Chocorua Art Works (chocoruaartworks.com) is a nonprofit artist and craft-arts organization started in 2010 by a group of artists showing their work at the Tamworth Farmers’ Market. Now working out of the Chocorua Creative Arts Center’s gallery and studio spaces, the group offers classes and workshops, exhibitions, and openings for musical, performing, and writing workshops. They also boast a garden space for growing food, drawing, painting or sculpting, and to make dyes, fibers, and teas.

Beyond Chocorua Art Works, Tamworth knows how to put out the welcome mat for artists. Imagine a week when a bevy of painters—locals and those from all over the country—descend upon several outdoor settings to paint en plein air. Tamworth Wet Paint (wetpainttamworth .com) is a weeklong festival held in May that culminates in a Collectors Gala art show of all the works made during the week. Check their website for details as many local businesses participate by hosting nightly artist receptions and village walks.

As an aside, painting en plain air is a spectacular idea for any artist with an interest in fall landscapes. Throughout Tamworth are multiple points from which to recreate sweeping views or focus on a specific subject. It is truly an incredible place to set up an easel.

Arts Council of Tamworth (artstamworth.org) also hosts many local art and music happenings, including the 2016 creation of the Tamworth 250th Mosaic, an Arts Council of Tamworth project celebrating Tamworth’s 250th anniversary. Created by hundreds of adults and children from the community working with mural artist David Fichter, the two mosaics are now on view on the front face of the K.A. Brett School, Tamworth’s public elementary school.

The Arts Council also serves up year-round music events and series in public and commercial spaces including the Cook Memorial Library at 93 Main Street.

With the Barnstormers Theatre set in the center of Tamworth Village, this small community has provided a home to summer stock actors and playwrights since 1931. It is perhaps the truest summer stock theatrical experience that one could imagine. And lest one think it is local amateurs, the Barnstormers attracts more than its fair share of talent from New York City and members of the Actors’ Equity Association. In short, it’s a classic experience where the quality of performance and production value is quite high.

And then there are the writers. As but one example, E.E. Cummings made his home at Joy Farm, just a few miles from Tamworth in Madison. Though the farm is privately owned, the owners have preserved the farmhouse and Cummings’ writing cupola located at the edge of the forest overlooking a broad field and the farmhouse.

It was here that Cummings wrote several his poems and created no small number of paintings. In fact, when the owners purchased the property in the 1970s, it came with his library intact—notes by Cummings could be found written in the margins of many of the books—and a few paintings he’d left behind.

E.E. Cummings died of a stroke while at the farm, which is now designated as a National Historic Landmark and on the National Register of Historic Places.

For those interested in viewing the home, it is best to reach out to the Friends of Madison Library at FOMLibrary.NH@gmail.com.

Other notable writers with a connection to Tamworth are William and Henry James.

As you head out of town on Cleveland Hill Road, be sure take in the scenic drive past elegant homes and alpine vistas on the way to Ordination Rock. This unique memorial—a white obelisk perched atop a huge boulder—pays tribute to the Reverend Sam Hidden.

After climbing the stairs to reach the obelisk, visitors will learn that Hidden was originally from Rowley, Massachusetts; served in the Revolutionary War; and was a reverend in the town of Tamworth for more than four decades.

“He came to a wilderness and left it a fruitful field,” reads one side of the singular memorial.

Farther on, Route 113 turns south becoming 25 West and winds toward Sandwich. It is a 15-minute drive that compares to any of the world’s most scenic car trips. Picturesque fields, willowy pastures, and craggy spectacles simply enthrall.

Special thanks to Juno Lamb, events coordinator at Chocorua Lake Conservancy, for all of her assistance in putting this section together.

If it’s one of those warm, early fall days, go for a swim in White Lake or Lake Chocorua, each with its very own state park complete with hiking trails, perfect for taking in cool air and vivid foliage. At 3,490 feet, Mount Chocorua sits regally near its namesake lake and is the easternmost peak of the Sandwich Range in the White Mountains. You can admire it, take a photo of it, paint it, or climb it.

For more information check out Chocorua State Park and be sure to read the firsthand account of climbing Mount Chocorua.
blog.nhstateparks.org/champney -brook-trail-mt-chocorua

Big Rock Cave Trail is a 3.5-mile (in and back) trail located near Tamworth, featuring a forest hike/walk and a cave. The trail is rated as moderate and primarily used for hiking.
www.mountainproject.com/area/106595992/big-rock-cave

Especially fun for families is a trek to Beede Falls and Cow Cavern in Sandwich.
www.nhfamilyhikes.com