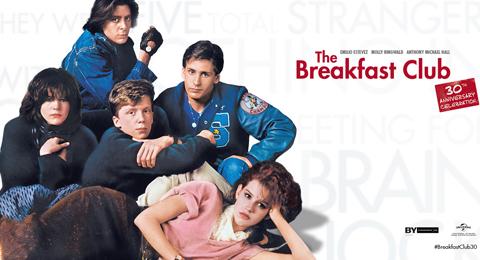 Join the Brat Pack for the 30th Anniversary celebration of The Breakfast Club, ranked number 1 by Entertainment Weekly’s list of the 50 Best High School Movies. For the first time on the big screen in wide release since the 1980’s, gather your pack and head to the cinema for a true fan tribute honoring John Hughes’s most memorable and recognizable work.

The Breakfast Club defined an entire generation of pop culture and included such talent as Molly Ringwald “the prom queen,” Anthony Michael Hall “the geek,” Emilio Estevez “the jock,” Judd Nelson “the trouble maker,” and Ally Sheedy “the outcast.” This 30th Anniversary release includes the completely re-mastered feature that has never been seen before on the big screen plus a newly remixed bonus content featurette titled The Breakfast Club  A Retrospective that takes a look back at the film that defined a genre. Featuring personal insights from cast members Judd Nelson, Ally Sheedy, Anthony Michael Hall, and John Kapelos as well as contributions from filmmakers Diablo Cody, Amy Heckerling and Michael Lehman, this featurette is a must see for all Jocks, Criminals, Basket Cases, Brains and Princesses.

In partnership with the Capitol Center for the Arts, Red River Theatres is pleased to present their Movie Magic Quote-A-Long to John Hughes’ quintessential The Breakfast Club, which is celebrating 30 years of sass talking, lip gloss wearing, pixie stick eating glory. Tickets will include trivia, an 80’s costume contest, prop bag and more!

We all have favorite movies and lines that we can quote at the drop of a hat. These films and their words are so much a part of our culture, that’s downright impossible to sit back and watch the movie in silence. At a Red River Theatres Movie Magic Quote-A-Long knowing the lines and saying them for all to hear is the name of the game!

Each show has a set of props to help take the action off the screen and make it come alive in the theater. Whether its foam swords and mustaches you can wear during The Princess Bride or newspaper and croutons for Rocky Horror Picture Show, each Quote-A-Long event features something that makes it more interactive than any other screening you’ve attended.

Information courtesy of the Capitol Center for the Arts’ website.