Make It Better With Bacon 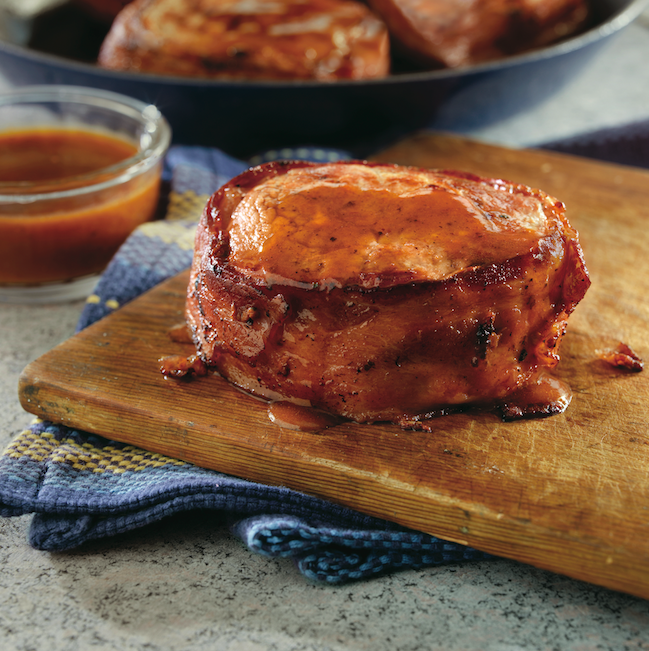 The rich smell and crisp, smoky flavor of fresh sizzling bacon is a temptation few diners can resist. Indeed, some 53 percent of Americans eat bacon at least once a week, according to a recent survey by Smithfield. This love for bacon is fueling a culinary craze for bacon-infused and -inspired foods – everything from the tame (sauces) to the outrageous (ice cream).
But perhaps this trend should come as no surprise. After all, a full 78 percent of Smithfield’s survey respondents agreed that bacon makes everything better.
Whether you’re pairing your morning eggs with strips of their most perfect protein sidekick, loading up a BLT with an extra layer of bacon-y crunch, or following the lead of the nation’s top chefs and experimenting with new flavor combinations, you’re likely to achieve a crowd pleaser.
Quirky products and recipes aside, for the average consumer, the simple versatility of bacon makes it a winning addition to most meals. Even a classic pork chop, one of the most popular cuts of fresh pork, takes on a new personality when paired with the distinctly savory flavor of bacon, as in this recipe for Bacon Pork Chops with BBQ Glaze.
For more inspired recipes featuring beloved bacon, visit www.Smithfield.com and www.Facebook.com/CookingWithSmithfield.
Bacon Pork Chops with BBQ Glaze
Serves 4
4 6-7 ounce Smithfield Boneless Pork Loin Chops (1 1/4-inch thick)
1 teaspoon coarse salt
4 slices Thick-Cut Smithfield Bacon
4 tablespoons barbecue sauce
1/2 cup lager beer
1 teaspoon canola oil
1/2 cup chicken broth, reduced-sodium
Season pork with salt. Wrap bacon around edges of pork and secure with wooden toothpick.
Mix together barbecue sauce and beer.
Heat oil in oven-proof large skillet over medium-high heat. Stand chops with bacon-wrapped edges down in skillet, leaning against side of pan if needed. Using tongs, rotate chops along edges to lightly brown bacon (allow about 45 seconds to brown each section).
Place chops flat side down in skillet and cook until underside is lightly browned, about one minute. Turn chops over. Spread equal amount of barbecue sauce mixture over each chop, letting excess run into skillet.
Place skillet with chops in oven and bake for 10 minutes. Transfer each chop to dinner plate and let stand.
Pour fat from skillet, leaving browned bits. Heat skillet over high heat until hot. Add broth and bring to a boil, scraping up browned bits with wooden spoon, and boil until reduced by half, about two minutes. Top each chop with spoonful of sauce and serve hot.